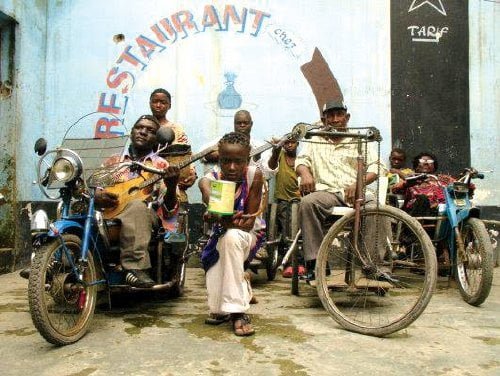 In 2004, in the heart of Kinshasa DRC, handicapped street people seek solace in their music. A band, called Staff Benda Bilili, worked tirelessly to keep their music going through all the turmoil of being homeless and paraplegic. Their resolve paid off, first with an album, then a concert in their home town and, finally, a European tour for “Benda Bilili!”

French writer/directors Renaud Barret and Florent de La Tullaye went to the Congo to make a documentary about street music in Kinshasa. There they found Papa Ricky, a paraplegic established at a roundabout making glorious music with other disabled musicians, and the filmmakers brought him their own, teenaged runaway discovery and began to shape their own story by helping the band to record. But it was always Ricky's vision that led the group he called Staff "Benda Bilili!" This documentary is rough around the edges, but it chronicles such an amazing, incredible and joyous story that it is a delight to watch. Papa Ricky is an inspiration, a man crippled by polio living with his wife and children in a ramshackle handicapped shelter, and yet he's always there to give a helping hand to others. The music Ricky and his buddies create inspired by their lives is not only addictive but a worthy addition to any world music fest lineup. After finding and following Ricky for a while, the filmmakers find Roger, a kid who lives on the street supporting himself with the music he plays on a one stringed instrument he's built out of a can. Roger proves a natural fit for Staff Benda Bilili, but just as the group begins to record, Ricky receives a devastating phone call from his wife - their handicapped shelter has burned to the ground and he and his fellow musicians have lost the little they had. A year is lost to sheer survival and when the filmmakers return a year later with backing from a record producer, Roger must be tracked down to his remote home so the band can regroup in Kinshasa's zoo and make a record before beginning what turns out to be a European tour. There are a couple of kinks. Sometimes the film takes a leap or two that leaves its audience tagging behind and Roger's story is followed by the subtitled name of another band member who fails to come into focus. Most frustrating is that we never learn just how successful Benda Bilili! becomes - number of records sold, concert earnings, etc., nor how their lives in Kinshasa change because of that success. Still, the documentary is engrossing, often funny and always danceable. If you think you've got problems, watch what this extremely disadvantaged group of people are able to make of their lives and be humbled. Who knew a paraplegic could dance?

This is an honestly told rags to riches story was five years in the making as Gallic docu-makers Renaud Barret and Florent de la Tullaye introduce us to the principle players of the band on their turf - the streets of Kinshasa. Street life is tough everywhere in the world but Kinshasa seems to be the toughest where its denizens are not just homeless, they are handicapped paraplegics stricken by polio and forced to sleep on cardboard laid down in the open air of the Kinshasa zoo. The musical talents of Beda Bilili were not just the subject matter of the filmmakers. Barret and de la Tullaye also helped the band and paid to produce their album. This catalyst, which turned into airplay, then a local concert, then an invitation to participate in a music festival in Paris, was years in the making but the filmmakers make it flow so the time is compressed. The tenacity of the homeless musicians in bringing their music to life, with the filmmakers’ help, is an inspiration. The five disabled players, led by Leon “Papa Ricky” Likabu, and an able-bodied youngster, 13-year old Roger Landu - who we watch grow up into a mature 18-year old through the course of the documentary - brings his homemade monochord, creatively, into the band’s mix. Staff Benda Bilili’s wonderful original music, a fusion of R&B, rumba and hip-hop that gave me happy feet. Even the depressing subjects, like being forced to sleep on a cardboard mattress in a shanty town, is made upbeat by this bunch of troubadours whose love of music is palpable. The years pass seamlessly in this exciting and vibrant musical documentary. I only wish the filmmakers gave us some information as to how Staff Benda Bilili made out after the documentary wrapped – I want to know!