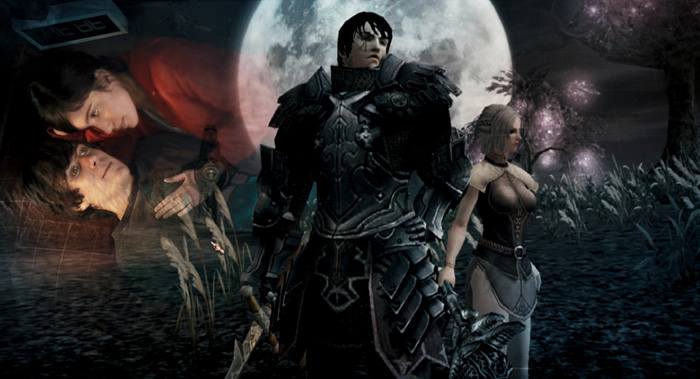 Ben (Greg Timmermans) is an autistic Belgian teenager trying to cope with the hell that is his life as his unsympathetic peers at school bully him mercilessly. He retreats to his favorite video game, Archlord, where role-playing is the only escape he knows in “Ben X” DVD.

Ben (Greg Timmermans) seems like a fairly normal teenager, absorbed in Archlord, a role playing video game, and texting with Scarlite (Laura Verlinden), his unknown female fantasy partner in the game. Then Mother (Marijke Pinoy) calls him for school and Ben goes outside into a world that is more difficult for him to navigate, with the distressing noise and bullying contemporaries that go hand-in-hand with Asperger Syndrome victims, than the world in his computer where he is the hero, "Ben X." Writer/director Nic Balthazar, adapting his own novel, would fool most as a first time filmmaker, as "Ben X" compellingly pulls one into Ben's world, a world most people are aliens which either address one as a child or attempt to humiliate or harm, where sound puts one's nerves on edge, where sneaking under the radar and creating an illusion of normality through studied performance is the daily goal. The film's two (very small) stumbling blocks can both be explained away. Timmermans looks about five to ten years older than the high school student he is supposed to be, but he could have been held back when his condition had not yet been diagnosed (that much young brother becomes awkward with that hypothesis though). The film's resolution is just a hair shy of gimmicky (and is made possible by a supporting character's action that is suspect), but it is a surprise and one that will certainly satisfy most audiences. Balthazar sets a foreboding tone early on, as Ben's mother is seen in a television interview, discussing how 'someone always has to die first before anyone does anything.' He will flash forward to 'interviews,' either naturally inserted like this one or as direct-to-camera addresses, to good effect throughout the film. Ben leaves Archlord at a heroic level 80 and steps into the street towards school, running a constant interior monologue - 'remember to smile' - and checking the heart rate monitor strapped onto his wrist. Balthazar throws in a cutaway to a classmate who tells us 'things had gone too far' before we rejoin Ben as he boards the bus where he meets his nemeses, Bogaert (Titus De Voogdt) and Desmet (Maarten Claeyssens) who proclaim themselves Ben's best friend but take every opportunity to plague him. In a matter of days, they will have pulled down Ben's trou' for an Internet video and slipped him a powerful pill and left him in the park, his cell phone stolen. Mama becomes more and more distressed at home, calling in the cops, sharing Ben's hidden ruminations in a suicide scrapbook. Ben is found, but distresses his mother once again when she awakens from a nap to discover a note telling her 'not to worry.' Ben has left for the train station, where Scarlite said she would meet him face to face for the first time. Unfortunately, this information was available on the cell Phone Bogaert and Desmet took from him. With "Ben X," Balthazar digs deeply into two separate themes, here inescapably linked. Bullying is a problem for even those without a handicap, and Balthazar, using caring teachers (Johan Heldenbergh and Jakob Beks, both of "Antonia's Line," are a religious and metalworking instructor respectively), a seemingly knowledgeable principal (Ron Cornet), sympathetic students and a highly sensitive family circle, depicts how teenage torment can occur despite high alert and best intentions. Add a handicap of any kind, especially one as little understood as Autism, and the situation is intensified. Any victim of such abuse would be ashamed, but Ben is also incapable of 'normal' communication skills. What his abusers dismiss is his keen intellect. In addition, Asperger's Syndrome takes its toll on those closest to Ben. Balthazar has structured his story and fleshed out his characters so that it is implicit that the mother's protectiveness of her 'special' son has driven a wedge into her marriage and that father (Pol Goossen), although responsive, is now with a girlfriend (Tania Van der Sanden) incapable of anything other than platitudes. We experience Ben's state of mind through devices such as fisheye lenses, amplified and distorted sound, the pop music through which he escapes (Sigur Ros is featured) and the animation of Ben X within the confines of Archlord. Balthazar is adroit at using both flashbacks which fill us in on Ben's pre-diagnosis childhood, notable for the refracted light effects around the image edges, and his flashforward commentary from supporting players. The audience keeps its bearings within the shifting time lines unless Balthazar wishes otherwise. It is a strong directorial debut and was chosen by Belgium for 2008's Foreign Language Oscar submission. B The DV

First time feature writer-director Nic Balthazar adapts his own novel about a Flemish teen who, after years of misdiagnosis and incorrect treatment by the so-called medical experts, is finally identified as having Asbergers Syndrome. His relatively mild form of autism puts him in the mainstream world. For Ben, this means having to deal with the cold, cruel universe of high school and the bullying and abuse by his “friends.” His only solace is being able to get lost in the online role-paying game world of Archlord, a place where Ben can pretend to be a superman and where he meets fellow gamer Scarlite (Laura Verliden). Nic Balthazar gives us a dark, hopeful story of a young man who lives in his own head, dealing with real life problems by losing himself, Ben, in the on-line world where he becomes the super human and capable Ben X. This Ben can handle anything thrown at him but the real Ben has no such powers. He must face, instead, the daily humiliations bestowed upon him by his fellow student nemeses, Desmet (Maarten Claeyssens) and Bogaert (Titus De Voogdt). Their invasions into Ben’s space drives him further into his imaginary universe where he can fight back. His on-line meetings with Scarlite will drive Ben to find revenge. Greg Timmermans gives an exemplary performance as the title character, making his withdrawn loneliness a palpable thing. Balthazar examines his world, giving insight into Ben’s difficult affliction and his hope to overcome it. It is a fine character study by the young actor and his fledgling director. The melding of Ben’s real life and his fantasy world gives the film its psychological flow. The DVD extras are limited to the film’s trailer and a film short but it is “Ben X,” the movie, that is the draw.