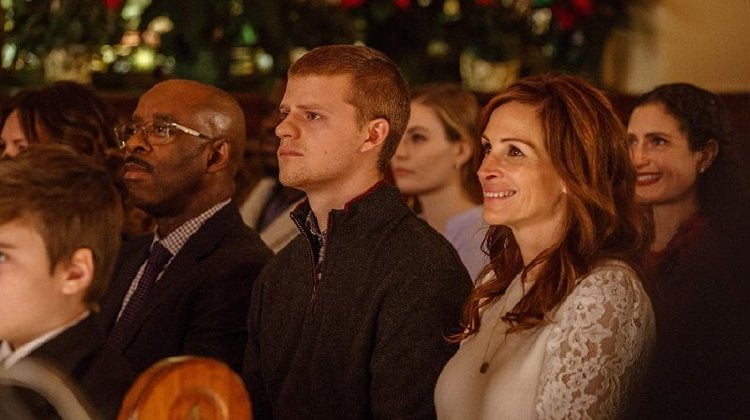 As Holly Burns (Julia Roberts) collects her teenaged daughter Ivy (Kathryn Newton) and younger kids from her second marriage, Lacey (Mia Fowler) and Liam (Jakari Fraser), from a Christmas pageant rehearsal, we see nineteen year-old Ben Burns (Lucas Hedges) looking for entry to their empty house. He's been away at another stint for drug rehab and isn't expected home. When Holly pulls into her driveway, she's astonished then warily joyous, but although she loves her brother, Ivy isn't happy that "Ben Is Back."

Writer/director Peter Hedges, his star's dad, made his directorial debut with a family in crisis at Thanksgiving with 2003's "Pieces of April." That film was was a dramedy, but this Christmas set offering is straight drama. It's small in scale, essentially a two-hander between Roberts and Hedges, and they are both at the top of their game here, Roberts fierce and unrelenting in her efforts to protect her son, Hedges keeping us guessing as to his true intentions. Ben's stepdad Neal (Courtney B. Vance) is another to raise an eyebrow at Ben's presence, he and Ivy united in their remembrance of ruined Christmases past. But Ben's horseplay with his gleeful younger stepsiblings and assurances that his counselor has approved this earlier release nudge a compromise into place. Holly, fighting the urge to just succumb, lays down the law. Ben will submit to drug tests and not leave her sight for the twenty-four hours he will stay through Christmas Day. Ben asks his mom for a trip to the mall, wishing to buy gifts for the kids and both see people who begin to fill in details for us, Holly's reaction to Ben's former doctor shocking, Ben so shook seeing an old pal he tells mom he needs to attend a meeting immediately. That night at Church, everything is cast in a golden glow, Ivy's singing sweet, Lacey and Liam adorable, but there is Beth Conyers (Rachel Bay Jones), the mother of Ben's girlfriend lost to an overdose, sitting across the aisle. Arriving home, the Burns-Beebys find it ransacked. Worse, Ben's beloved dog, Ponce (Nigel), is nowhere to be found. All correctly deduce that this is Ben's drug past come home to roost. Ben, who credits Ponce for saving his life, is dead set on finding him that very night, so Holly agrees to accompany him despite her husband's protests. The two set out on a Christmas Eve odyssey that goes to some very dark places. Ben, realizing he must confront a dangerous dealer, architects his escape from mom. Holly, frantic, lies to Neal, intent on finding Ben at any cost. Hedges' screenplay may primarily be about a mother's fight for her son, but there are many more layers to it. There are the family dynamics of a loved one posing danger and disruption, the politics of blended families and the guilt harbored by recovering addicts. In one of the film's most affecting scenes, we see how mothers recognize each other's depth of suffering, Holly supported by the one woman with an unfathomable obstacle to that kindness. Hedges also gets in a shot at laws that would forbid a pharmacy from selling a life saving drug to treat an overdose but readily supply delivery systems. I was never a fan of Roberts' work as a younger actress, but she's found her surprising niche in mom roles like last year's "Wonder" and now this. Hedges goes more than toe-to-toe with her, Ben's outward delight at being with family cast into shadow by encounters with people from a tight-gripped past. The production, shot on location in upstate New York, serves its subject well, the Burns-Beebys white colonial well lived in and warm, in stark contrast to the run down, rural abodes and business back rooms where drug dealers ply and partake of their trade. Hedges wraps up his Christmas tale on the perfect note, satisfying his audience without indulging their sweet tooth. Grade:

Christmas is fast approaching for the Burns/Beeby family but they are not expecting a special visitor when Holly’s (Julia Roberts) son (Lucas Hedges) suddenly shows up on their doorstep, fresh out of rehab. While Holly is thrilled, the rest of the family is skeptical and not certain why “Ben Is Back.” Peter Hedges writes the screenplay and directs his son, Lucas, and Julia Roberts in a mother’s-love-for-her-son story about drug addiction, rehabilitation and hope. You know right from the start that Ben’s return home is going to be a problem. Holly, though, really believes in him even if his sister, Ivy (Kathryn Newton), and Holly’s husband, Neal (Courtney B. Vance), are doubtful, at best. You also know that the family has been down this road before and frequently. At its heart, though, “Ben Is Back” is about the fierce love of a mother for her son, wanting to protect him from himself. Ben comes home under less than legit reasons, having checked out of rehab, and vows to Holly and his family that “This time it will be different.” Only Holly believes in Ben and she allows him to stay for just one day, but under her rules and constant presence. But, Ben’s past life soon intrudes, making for the film’s drama about getting the family dog back. The story does not explore new territory as Holly fights for Ben’s life with the tenacity of a she-wolf protecting her cub. Julia Roberts personifies such fierce resolve that you believe she would put her self in harm’s way to save him. Lucas Hedges, who has had one heck of a career in a remarkably short time, proves he is a capable young actor and stands well opposite his veteran co-star. The supporting cast is incidental, except Kathryn Newton as Ben’s smart and caring sister, Ivy. This might be considered the new tradition for Christmas movies – instead of good tidings and joy, it is now about heartache and desperation. I think I like good tidings and joy better.