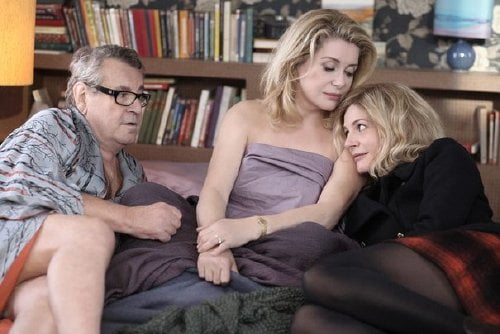 In 1964, shoe store clerk Madeleine (Ludivine Sagnier, "Swimming Pool," "Love Crime") lifts a pair of Roger Vivier pumps and changes her destiny from possible thief to prostitute. One of her clients, Czech doctor Jaromil (Rasha Bukvic, "Taken," "Coco Chanel & Igor Stravinsky"), becomes her husband but his infidelities and the Prague Spring come in between them. Years later, their daughter Véra (Chiara Mastroianni, "A Christmas Tale," "Chicken with Plums") will find herself in a predicament much like her mother's - loved by one man but wanting another - in "Beloved (Les bien-aimés)."

Writer/director Christophe Honoré ("Love Songs," "La Belle Personne") returns with another musical, this one of parallels, between a mother and daughter, between the real life mother/daughter actresses who play them, between the free love 60's and AIDs darkened 90's, between a Prague in revolution and an America in its darkest hour. To see Deneuve singing in a train station again cannot help but recall "The Umbrellas of Cherbourg" and Jacque Demy's film is honored as well in Alex Beaupain's songs with lyrics which propel the story encased in breezy pop tunes. The film suffers from an over-extended ending and an under-explained emotional intensity shift in one of its relationships, but it also does not take the expected path. "Beloved" is a great gift to Deneuve and her daughter, Chiara Mastroianni, and the actresses who play their younger selves (Sagnier and Clara Couste) do them a solid service with sweet singing voices. Honoré plunges us into a world of cat eye eye-liner, cotton candy bobs and a French cover of 'These Boots Were Made for Walkin' to establish Madeleine in Paris. Fourteen years later, the bob's become a ponytail, the husband's become the lover and the former thief/prostitute is ironically married to gendarme François (Guillaume Denaiffe). The young Vera declares herself the personification of her parents' sex life. Skip ahead to 1997 and Vera's even wilder than her mom in ways, drinking and drugging and dancing the night away. Her lover is Clément (Honoré regular Louis Garrel), but when she sets eyes on the band's American drummer, Henderson (Paul Schneider, "All the Real Girls," "Bright Star"), there will be no one else for her. And while Henderson seems a soul mate there's a problem - he's gay. At this juncture, Mastroianni's mom, Catherine Deneuve ("A Christmas Tale," "Potiche"), steps into the role of Madeleine while Czech director Milos Forman becomes a much more ardent and sentimental Jaromil (he even asks François, now played by Michel Delpech, to step aside, but the husband declares undying love and the willingness to look askance). Meanwhile, Clément, who initially seemed somewhat indifferent, is now committed to a woman who travels to Montreal on 9/11/2001 to ask Henderson to father her child. Mastroianni is mismatched with her men, Garrel 9 years younger, Schneider closer at only 4, and it's apparent, but it's just too rich watching the mother and daughter play mother and daughter, in song no less. You can see not only their characters interacting, but personal enjoyment crackling beneath the surface. Honoré is maybe too persistent in casting Garrel, an actor with little charm but loads of the pouty entitlement the very good looking can be afflicted with. It's hard to believe he's the least put out that this older mess of a woman prefers someone else. Schneider, on the other hand, is a woefully underutilized actor and he's got great chemistry with Mastroianni, a true connection. We lose a couple of these characters, the first death handled with such simple grace, the loss is felt far more than one would imagine, but the second is dwelt upon too long. Director of photography Rémy Chevrin keeps his camera fluid, especially during the film's many different duets. Editor Chantal Hymans ("Love Songs") teases out special moments just by hanging onto a scene for the extra beat. In addition to the French language cover of Nancy Sinatra's famous song and Beaupain's original work, the film also includes covers of "Who Do You Love?" by 'Henderson's' band, Thousand, and Anika's reworking of The Kinks' 'I Go to Sleep.' It's not perfect, but Honoré's "Beloved" is both light and dark, sweeping and seductive.