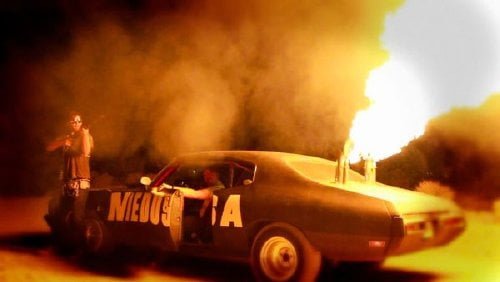 Best friends Woodrow (Evan Glodell) and Aiden (Tyler Dawson) are an inventive pair who considers themselves a two-man gang called Mother Medusa. They share an interest in building a flamethrower and emulate their hero, Mad Max. as they prepare for the coming apocalypse. When Woodrow falls for Milly (Jessie Wiseman), the two friends grow apart. But there lives and past plans will collide in a wave of stunning violence and destruction on a street called “Bellflower.”

Woodrow (writer/director Evan Glodell) and Aiden (Tyler Dawson) are childhood friends from Wisconsin transplanted to L.A. where their existence consists of boozing and constructing a flamethrower and Mad Max-style car for their imagined oncoming apocalypse, something they illustrate in a comic book where Lord Humongous rules all. But then Woodrow is taken off course by Milly (a refreshingly voluptuous Jessie Wiseman), a local who warns him she will break his heart, and an apocalypse is set in motion on the street where they all live, "Bellflower." Here's an interesting American independent which, while flawed in the storytelling department, exhibits gritty technical flair on a shoestring and a kind of nightmare logic. The outlaw nature of the production, which used uninsured cars with real flamethrowers and put its cast and crew into literally explosive situations without permits, comes through for better and occasionally for worse on the screen. The filmmaking team call themselves Coatwolf and purportedly they lived together in the wing of an abandoned office with $5,000 in funding which quickly ran dry. In turn, the denizens of Bellflower live in small homes with little furniture and no visible means of support but plenty of booze and cigarettes. Between the exhaust fumes and the drinking the film could give you dry mouth. But there is something of interest going on here. At an outdoor beer garden of sorts, Woodrow accepts the challenge to go up against buxom blond Milly in a cricket eating contest. He strikes out with the bugs but not with the babe. He arrives to take her out on an official 'date' and is a bit disconcerted when her roommate(?) Mike (Vincent Grashaw) answers the door. She insists on being taken to the grungiest hole in the wall he's ever seen and he remembers a place he saw in Texas when he and Aiden were on the road. Off they go in the 'Speed biscuit,' Woodrow's customized mint green Volvo complete with whisky dispenser on the dashboard. While they're on the road eating day old meatloaf and trading Woodrow's car for an 'apocalyptic' old motorbike, Aiden continues work on the flamethrower and is courted by Milly's friend Courtney (Rebekah Brandes) who invites him to the birthday party that will be thrown at Mike's. (The filmmakers get sloppy here with a montage crosscutting between the two locations that shows Woodrow and Milly in his car well after they've traded it and started to head for home.) Courtney's bash is a bacchanal and shortly afterwards Milly's foretelling comes painfully true. The road accident which follows sets Woodrow on two alternate paths, two versions of the apocalypse. Glodell customized a digital camera to make "Bellflower" and the film has a very distinctive, scorched earth kind of look (cinematography by Joel Hodge). Sometimes his lens appears to obscure focus in all but one section of the screen, other times there's dirt and detritus masking the image. The soundtrack is edgy and the combination of music (original music by Jonathan Keevil and Kevin MacLeod) and visuals gives the film a heavy metal feel without literally using heavy metal. Glodell is a charismatic character on screen and he and Wiseman are artfully combustible. Dawson is less complex, more project oriented, his Aiden a garage tinkerer. Brandes is a cipher, seemingly taken to Aiden until Woodrow's been thrown over, the script making little sense of her character and Grashaw's Mike is merely a plot point. Still, Glodell's made a unique film out of little more than scrap.

First time director-producer-screenwriter-editor-and-star Evan Glodell brings us a low-budget fantasy that starts out as a straightforward linear tale of two friends growing apart. There is always the hint of violence throughout “Bellflower” and this hint becomes full blown as emotions run high. Things are not what they seem, though, and multi-hyphenate Glodell packs some surprises, though not many, as he ends the film with a bang, not a whimper. The mostly newcomer cast is led by Glodell as Woodrow who is happy living his life planning, with Aiden, to be the next Road Warrior. Inventor Aiden, merrily playing with his high tech toys, is hurt by Woodrow’s departure in favor of Milly but continues to work on his dream project: the fire-belching, apocalypse-friendly muscle car named Medusa. This fire breathing road monster plays a big part in the violent imagery of “Bellflower.” This is a low budget work and it shows. The flamethrower and Medusa are imaginative props and give the film its flash but newcomer filmmaker Glodell needs to beat the pavement for his next work. Still, “Bellflower” is a solid calling card and, maybe, next time around he could wear fewer hats.