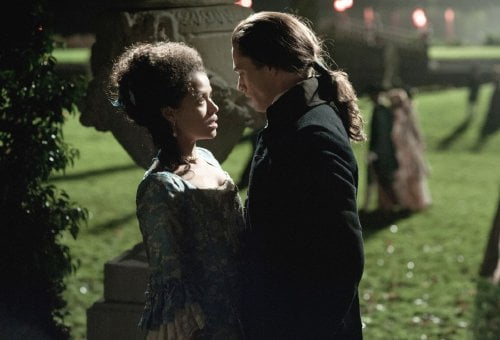 Dido Elizabeth Belle (Gugu Mbatha-Raw) is the illegitimate daughter of a British naval captain, Sir John Lindsay (Matthew Goode) and a slave woman. He is about to sett off on a mission half way around the world and places the young girl into the hands of her great uncle, Lord Chief Justice Mansfield (Tom Wilkinson) and his wife (Emily Watson), who raise the girl as their own with, almost, all the aristocratic trappings due “Belle.”

In 1769, Naval Captain Sir John Lindsay (Matthew Goode, "Match Point," "Stoker" brought his young illegitimate daughter (Lauren Julien-Box) to be raised by his uncle, Lord Mansfield (Tom Wilkinson, "Michael Clayton"), the Lord Chief Justice of England, at his country estate. Mansfield and his wife (Emily Watson, "The Book Thief") were shocked to discover the child was black, but they welcomed her as a companion to their other niece Elizabeth (Cara jenkins). Although she became a beloved member of their family, she had an unusual place within society, following rules that seem to have been wholly created for "Belle." Inspired by a painting of Belle and Elizabeth that hangs in Scotland's Scone Palace, writer Misan Sagay began an investigation into who the young black woman was who appeared to be an equal of the white English lady at her side and found an amazing confluence of events - the daughter of a slave and a Naval Captain was brought into the home of the man who would eventually rule on the infamous Zong slave ship trial, initiating the beginning of the end of slavery in England. Using only minor dramatic license, Sagay and director Amma Asante have crafted a historical period romance that tackles racism with all the social intricacies of a Jane Austen novel. In fact, the first conversation Lord and Lady Mansfield have after spinster aunt Lady Mary Murray (Penelope Wilton, TV's 'Downton Abbey') takes the young girls to play is about Dido Lindsay's marriage prospects. As only somebody well below her station would be likely to propose, Lady Mansfield frets 'Who will take care of her?' when they are gone. But just as Belle (as Dido is known to intimates, now played by Gugu Mbatha-Raw in a breakout performance) is coming of age, news arrives of her father's death. She is heartbroken that she never got to know the man who so obviously loved her, yet he has left her an independent woman of means with a 2,000 pounds per year inheritance. Suddenly Belle is a more desirable catch among the underfunded titled, even though her color means she may only join their company after formal dining. There is a catch, of course. When Belle first meets the pastor's son, John Davinier (Sam Reid, "The Railway Man"), she is incensed when he tries to present himself directly, a classic romantic 'obstacle.' But Davinier becomes allied with Mansfield, who takes him on as a student of the law and when Belle begins to catch wind of the Zong case, only Davinier will tell her the truth behind the appalling story. They are clearly soul mates in every way, but the son of family friends, Oliver Ashford (James Norton, "Rush") has begun to court her, his mother Lady Ashford's (Miranda Richardson, "Harry Potter's" Rita Skeeter) distaste overcome by the thought of Belle's cash infusion. Meanwhile, Mansfield has thrown Davinier out for telling Belle what he wished to shield her from and Belle begins to meet him in secret as he pushes for justice in the Zong trial. This film has everything - a love triangle, a villain ("Harry Potter's" Tom Felton as Oliver's racist brother), social injustice and a big court trial. The painting which inspired the film is introduced as a gift from Mansfield to his niece as a statement against racial prejudice (the painting in the film is a different depiction from the real one). Asante deftly weaves these multiple threads into a highly satisfying whole with all the period trappings (locations, art direction, costume) one could hope for. There are some minor quibbles. Belle's meeting of Davinier follows her having been startled by him while having an evening walk, a scene whose inclusion might have explained her flustered reaction to him inside Kenwood House. Likewise, when a black London housemaid shows her how to comb out her hair, an earlier scene of her having it attended to at home would have helped clarify how a woman could have reached her age without this knowledge. Mbatha-Raw maintains a delicate balance of a lady who lives between two worlds, her late activism and indignation never feeling too modern for the time. The fact that she must woo Reid back into her good graces makes their blossoming love story all the more Austen-like and the two actors burn with their unspoken love (the real Dido Lindsay did indeed marry a John Davinier, although their romance here has been imagined and he was not involved in the Zong case). Also good is Sarah Gadon ("Cosmopolis") as the adult Elizabeth, a woman used to Belle's presence, but whose financial circumstances, ironically, place her in a more precarious position in the marriage market. At film's end, the real painting appears onscreen and I was struck with recognition - I had seen this painting over 10 years earlier and yet it was so familiar, still. Clearly it had made an impression even if I hadn't thought of it since, and so "Belle" came as an unexpected gift, the story behind the art.

There actually two films going on in “Belle.” The obvious one is the Jane Austen-like story about a woman of aristocratic birth right who must face being a pariah in pre-Victorian English society because of the color of her skin. This part of the story is nice with the beautiful Dido blossoming into a young woman who is the talk, if somewhat darkly, of the town. Despite the prejudices because of the color of her skin, one young man, John Davinier (Sam Reid), only has eyes for her, making you root for the young couple But, there is much more going on. As said, Dido was placed under the care of Lord Mansfield, a man who holds his family sacred, even above the state, if necessary. His exposure to his African-English grand niece, an intelligent, independent-minded young woman, impacts his decision when he must judge an insurance case where slaves being transported (over 100) where thrown overboard shackled to each other to “save” the ship’s crew. The slave ship owners claimed losses for the dead slaves. Lord Mansfield’s landmark decision would eventually lead to the abolition of slavery in Great Britain. Second time feature director Amma Asante does a very assured job in handling both stories, weaving them together nicely in the end. She takes some literary license in telling Dido’s story, embellishing aspects of her life. But, she is faithful to the character and Gugu Mbatha-Raw does a solid job in portraying the controversial, though little-know, real life figure. The helmer, with the script by Misan Sagay, also does a fine job in telling a pivotal moment in English history that would lead to the destruction of the institution of slavery – three score years before America was torn asunder dealing with the same issue. The cast is populated with some of Britain’s finest actors – Wilkinson, Watson, Miranda Richardson, Matthew Goode – and all are in good form. Tom Felton, as the sneering racist bigot and fiancé to Dido’s cousin, Elizabeth (Sarah Gadon), who despises her because of her color, is typecasting himself into a hole he may have a hard time getting out of. He is as unlikable as he was in the “Harry Potter” movies. The period production, including costume design and makeup, is first rate, as is the nicely composed photography. I had not heard of Amma Asante before this (she directed one other film, “A Way of Life” (2004)), but I am certainly looking forward to her next effort.