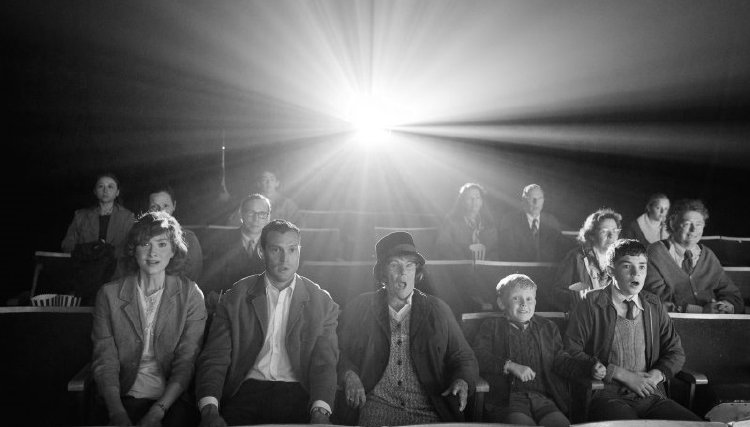 Nine year-old Buddy (Jude Hill) is known by and looked after everyone in his neighborhood until one day in August in 1969 when masked rioters bearing rocks and Molotov cocktails descend to terrorize the few Catholic families living in the largely Protestant community.  While his mother (Caitríona Balfe, TV's 'Outlander') clings to the familiar, Buddy’s father (Jamie Dornan, "Fifty Shades of Gray"), who must travel to England for work as a joiner, begins a gentle campaign to convince her to leave “Belfast.”

Having won this year’s TIFF audience award, writer/director Kenneth Branagh’s ("Henry V," "All Is True") paean to ‘those who stayed’ and ‘those who left’ is heavily favored in Oscar’s Best Picture race, but while the film, beautifully shot in black and white (by cinematographer Haris Zambarloukoshaving), has some charming moments, Branagh’s failure to establish his point of view as belonging solely to Buddy renders too many aspects of his film inauthentic.

Take, for example, the opening scene where neighbors pass along Buddy’s mother’s call for him to come in to tea (dinner in American parlance).  This busy street scene is so artificially choreographed we can practically see Branagh directing it, perhaps while thinking of some musical.  The mother who ventures out to shepherd her son in from the full scale riot which follows, shielding them with a garbage can lid, is impossibly glamorous with movie star looks and simple, yet clearly high quality clothing.  I doubt any mother living in a North Belfast council flat ever looked the way Caitríona Balfe does here (and no disrespect to the actress herself, who does fine work).

The film charts the hot and cold marriage between Buddy’s parents, their sexual chemistry obvious, their approach to finances (he plays the horses and has the tax man on his back) a sticking point.  In school, Buddy has a budding relationship of his own, making goo goo eyes at Catherine (Olive Tennant), his good marks putting him within jockeying position of sitting up front in class, next to her.  After school, he’ll get romantic advice from his beloved, mischievous Pop (Ciarán Hinds, this film’s MVP) with more grounded wisdom from Granny (Judi Dench, almost twenty years Hinds’ senior and it shows).  Buddy and his older brother Will (Lewis McAskie) seem quite taken with the Catholic rite of confession, which in their minds allow their Catholic acquaintances to get away with everything, but while Ma is sympathetic toward her neighbors, she believes their religion is fear-based (cut to the brothers being terrified by their own Minister’s fiery rhetoric in Church).

When his Pa comes home every weekend or two, Buddy will watch with concern as neighborhood thug Billy Clanton (Colin Morgan) pressures him to join his ‘cause,’ something Buddy will end up doing later, inadvertently, under the influence of older playmate, cousin Moira (Lara McDonnell, “Artemis Fowl”).  Pa’s eventual standoff with Billy will resemble “High Noon,” one of Buddy’s beloved movies.

The Westerns Buddy watches on TV at home are black and white movies, but Branagh features two family trips to the cinema, once for the ‘educational’ “One Million Years B.C.,” the second time for the acrophobia inducing “Chitty Chitty Bang Bang,” both of which he shows in color along with a live stage production of ‘The Christmas Carol’ Gran treats Buddy to (I can understand the logic of preserving a film clip, but the theatrical choice makes little sense).   The black and white proves more magical, Zambarloukoshaving’s lensing painting nostalgia with a silvery sheen.  The original score by Belfast native Van Morrison is very jazz inflected.

The film’s best scene is between Hinds and Hill, Pop’s honorably sketchy assistance to Buddy’s math problems quite hilarious (as well as fruitful!).  But Pop’s years in the mines have affected his lungs and a trip to the hospital is one way.  But while we’ve all heard of the infamous Irish wake, I doubt they’re usually scenes of seduction as seen here, Pa singing ‘Everlasting Love’ to his bootie-shaking wife accompanied by a professional horn section (!?).  “Belfast” ends on a close-up of a Gran still in mourning, Dench’s final words a fitting sendoff, maternal encouragement for the future laced with personal sadness.   Perhaps Branagh was too close to his subject, but his directorial choices are maddeningly inconsistent as is his film.