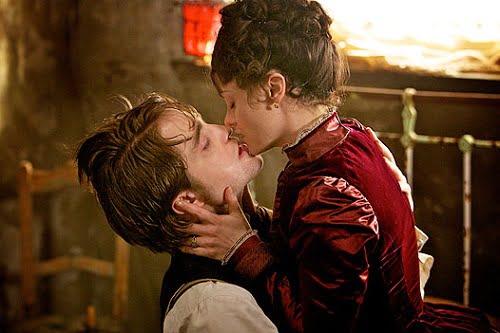 In 1890's Paris Georges Duroy (Robert Pattinson) meets a friend from his Algerian military service who helps him get a job as a journalist. That friend's wife, Madeleine Forestier (Uma Thurman, "Kill Bill"), becomes the first woman the seductive young man uses in his quest for fame, wealth and power in "Bel Ami."

I haven't read the Guy de Maupassant novel upon which this is based (adapted by Rachel Bennette, oddly enough, because her Duroy reminds me of "Pride & Prejudice's" Mr. Wickham), but even reading a brief synopsis would make one a bit suspicious of this adaptation. De Maupassant's antihero is supposed to orchestrate a power coup via his seductive powers over women, but in "Bel Ami" he spends more time being played than pulling the strings. That said, Robert Pattinson, whose career thus far has been wildly uneven, makes the most of directors Declan Donnellan and Nick Ormerod's feature debut, convincing as immoral opportunist. His is, of course not the most nuanced performance. After a string of not-so-great efforts, Uma Thurman reminds us of what she can do using Duroy as a front for her own work - uncovering the French government's corruption - as he uses her work to rise at La Vie Francaise. His obvious attraction is deftly shut down by Forestier who tells him that he will never be her lover. (He does later marry her, though, and she satisfies his needs, obviously considering them a distraction from her work - so much for the fabled seducer.) It is Madeleine who informs the wanting young man that her friend Clotilde de Marelle (Christina Ricci, TV's 'Pan Am') makes excellent company and has a husband who is often away and that the good favor of her husband and his boss Rousset's (Colm Meany) wife Virginie (Kristin Scott Thomas, "Salmon Fishing in the Yemen") should be his most important career goal. Besides the lushly appointed interiors and lavish costumes, "Bel Ami" is best enjoyed as a period soap opera rather than literary adaptation. Duroy's relationship with Clotilde provides the sex and as much romance as the cad is capable of, his relationship with Virginie the tawdriness and humiliation (hers) and with his wife he finds scandal aplenty. Rousset is the man to make or break him, but after going down, Duroy's phoenix-like rising at the end is all too perfunctory, especially as regards Rousset's about face from contemptuous disregard to practical acceptance