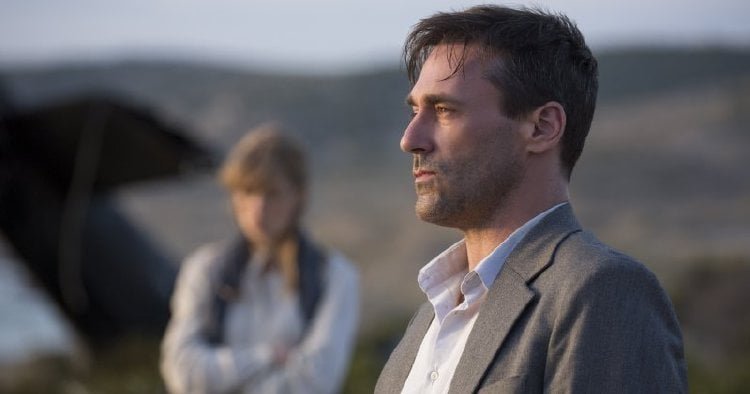 In 1973, Mason Skiles (Jon Hamm) was a high-ranking American diplomat in Lebanon. The peaceful city, once dubbed the Paris of the Middle East, suddenly becomes a violent political flashpoint which ends in an attack on the American embassy and Mason’s wife’s death. Eight years later, Skiles is a political mediator living an anonymous life, until he is called back to end a CIA crisis in “Beirut.”

American diplomat Mason Skiles (Jon Hamm) is hosting a dinner party in his lavish digs when his friend, C.I.A. operative Cal Riley (Mark Pellegrino), arrives to tell him they must take away the 13 year-old orphan, Karim Abou Rajal (Yoau Saian Rosenberg), that Mason and his wife Nadia (Leïla Bekhti) had planned to adopt as his brother is a Munich Olympics terrorist suspect. Ten years after the tragedy that ensued, Mason is an alcoholic running a small labor negotiation firm when he's approached in a bar, given an envelope containing $6,500 and an airplane ticket and asked to return to "Beirut." Screenwriter Tony Gilroy ("Michael Clayton") delves into the complexities of Middle Eastern conflicts with the panache of a John Le Carré novel in this fast-moving political thriller. Director Brad Anderson ("Session 9") keeps the tangled web of deceptions from unraveling into a muddle while giving the film the look and feel of its era, Belgian cinematographer Björn Charpentier casting his visuals beneath a pall of smoke and haze complemented by composer John Debney's Middle Eastern score. Mason is met at the airport by Bernard Teppler (Jonny Coyne), the man providing the cover of a University lecture. The city Mason once knew and loved now greets him with gunfire and bombed out buildings. But he himself is different, his long hair and sideburns gone along with the wife and child who centered his life. That evening at his hotel bar, he's approached by Sandy Crowder (Rosamund Pike), but he's not buying her smiling cover story. She takes him to meet with Ambassador Frank Whalen (Larry Pine), Colonel Gary Ruzak (Shea Whigham) and the National Security Council's Donald Gaines (Dean Norris) who inform him that the militia of the Islamic Revolution are holding an American hostage and specifically requested Skiles to negotiate for his release. That American turns out to be Cal and it is Karim's brother they want in return. The film's mystery is not why Skiles has been pulled back in, which is all too easy to guess, but in how he will navigate all the forces conspiring around him. In addition to Americans whose agenda may not be what it seems, Mason must determine the game plans of Israeli military boss Roni Niv (Alon Aboutboul), Palestinian Liberation Front minister Bashir (Ahmed Said Arif) and the kidnappers themselves. The ensemble cast all look their parts (Dean Norris the most difficult to recognize with his Peter Lawford-style wig and glasses) and are fine, but this is the type of movie that involves us more with its story than its characters. Hamm is at his best directly confronting his past with the now adult Karim (Idir Chender), Cal's wife Alice (Kate Fleetwood) and Cal himself when the two are allowed a brief audience and exchange coded information. There is some romantic subtext between Hamm's Skiles and Pike's Crowder, but the latter, referred to as 'the skirt,' impresses more as a professional under fire. "Beirut" is a taut, well written piece that leaves one with a deep appreciation of the intricacies involved in Middle Eastern politics. Grade:

Two very different filmmakers, director Brad Anderson and writer Tony Gilroy, team up to create a first-rate political thriller that is reminiscent of the novels of the 1960s and 70s – most will say those of John le Carre, but others, too, come to mind. Jon Hamm, finally, gets a starring role that is not just about his good looks and "Mad Man” persona. Mason has never really recovered from his wife, Nicole’s (Leila Bekhti), death at the hands of the terror attack led by the elder brother of young Karim (Ider Chender), a boy who Mason and Nicole unofficially “adopted.” Mason is stunned when asked to negotiate the release from the Palestinians his old friend, CIA spook Cal Riley (Mark Pelligrino), taken hostage and held for ransom – for the man responsible for Nicole’s death. Mason does not know, just yet, that he will be reunited with his old ghosts from the earlier days in Lebanon. What follows is a taut thriller that fires on all cylinders, does not give away its intricate plot and, most importantly, does not try to use sleight of hand to distract the viewer. John Hamm is first among equals with a veteran cast that envelop their varied characters and all are given dimension. Rosamund Pike is Sandy Crowder, the CIA handler assigned to protect Mason in the dangerous intrigue that is to come. The thespians who play the roles of CIA spooks, Mossad agents, Palestinian rebels, state department officials, etc. are familiar faces if not household names and well cast down the line. While the actors give depth and believability to their characters, it is the well-written and intellectually challenging story by Tony Gilroy that is the glue that brings the film together. That, and solid direction by journeyman helmer Brad Anderson, are good reasons to see "Beirut."