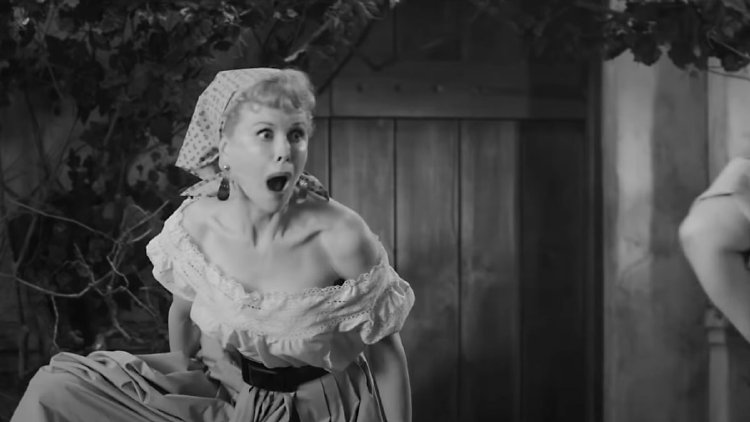 In the early 1950’s, 60 million Americans stayed home every Monday night to watch ‘I Love Lucy,’ a series Lucille Ball (Nicole Kidman) insisted costar her husband, Cuban band leader Desi Arnaz (Javier Bardem), in a ploy to keep him closer to home.  Its immense success was a surprise to everyone involved, but as Lucy’s star rose higher than Desi’s, it had the opposite effect of what she’d intended.  Then Confidential reports that Desi is having an affair, Walter Winchell accuses Lucy of being a Communist. and the Ricardos learn they are expecting but show runner Jess Oppenheimer (Tony Hale and John Rubinstein) says there is no way they can depict pregnancy on television, all in one week of “Being the Ricardos.”

Lucy fans objected strenuously to the news that Nicole Kidman had been cast as their idol, but they went into a tizzy for nothing as it turns out.  The actress gives one of her best performances as the red-headed comedienne, her lower, throaty voice a marvelous echo of Balls’, her imitations of Lucy Ricardo uncanny, her portrayal of the real woman revealing.  Writer/director Aaron Sorkin (“The Trial of the Chicago 7”) has structured this brilliantly, borrowing from “Reds’” use of current day interviewees to comment upon historical action, although in this case, the current day Oppenheimer and writers Madelyn Pugh and Bob Carroll Jr. are played by actors (Linda Lavin and Ronny Cox).  While they comment upon that crucial week (the screenwriting Sorkin giving screenwriters their due and gaining unique perspective), leading to its day-by-day recounting, Sorkin also flashes back, giving us snippets of Lucy and Desi’s history within his three-tiered approach.

They met on a ‘bad’ movie called “Too Many Girls” for RKO, where Lucy was a contract player.  They married soon thereafter, but had wildly different schedules, Desi playing into the wee hours if he wasn’t on the road.   Lucy got her big break on 1942’s “The Big Street,” which was well received critically, only to be shocked when RKO dropped her contract because of her age, suggesting she turn to radio.  That she did, garnering a hit with ‘My Favorite Husband.’  Executives in the studio, noting her performance was all encompassing, pitched a television version, something Ball took and ran with, turning it into ‘I Love Lucy.’

It’s fascinating to watch the politicking both within the marriage and without, Lucy always fighting for the very best comedic punch line even when it disparaged her character’s sex, something Madelyn Pugh (Alia Shawkat), an early feminist, fought.  Lucy also always had her man’s back, angling for an executive producer credit for Desi (much to Oppenheimer’s chagrin) because she felt his behind the scenes work was undervalued.  And Sorkin illustrates the truth behind this, Desi skipping over studio bosses right to the head of their sponsor, Philip Morris, to demand to be allowed to portray Lucy’s pregnancy in real time (‘Don’t F with the Cuban’ was the telegraphed reply, astounding the brass).  Then there is the dynamic with the Arnazes’ costars, Vivian Vance (Nina Arianda) dismayed by Ethel’s frumpy portrayal in service to Ball’s glamour, William Frawley (J.K. Simmons) an important confidante to Lucy, neither famously liking the other.

The ensemble works like a well oiled machine.  Bardem looks little like Arnaz, but he employs the accent and bandleader physicality expertly.  Shawkat and Simmons are strong supporting players, each capturing their different sides of the camera memorably.  The film also stars ‘The White Lotus’s’ Jake Lacy as the young Bob Carroll Jr. and Christopher Denham as Donald Glass, the Arnazes’ least preferred director who, of course, was on during their most stressful week.  Production is mostly limited to offices, dressing rooms and the soundstage containing the Ricardos’ living room (the one classic ‘Lucy’ bit recreated is the Italian grape crushing scene).

At the end of the week, Desi Arnaz pulls off an amazing PR stunt to clear his wife’s name just as she makes a discovery that breaks her heart.  But the show goes on.  It will be the only time Lucy just performs a scene she’d questioned as written, failing to record her better, alternate take utilizing Desi’s catchphrase ‘Lucy, I’m home!’.

One thing that COVID has done for me (and probably to me) is that, now, I like to see a movie with as little info as possible beforehand. I think I have grown to appreciate the surprise a good movie can hold in store. That is just what “Being the Ricardos” is for me - a surprise.

Writer-director Aaron Sorkin uses the framing of a week in the making an episode of “I Love Lucy,” as its backdrop. But, in that Monday through Friday of the making of the show a great deal goes on, from pregnancy to HUAC to infidelity, as the players deal with all in amusing and realistic, and often emotional, ways.

I, like many, had my doubts with Nicole Kidman as the near-mythical Lucy. I should not have worried as the actress, with subtle and effective use of make-up and camera, gives husky voice to the icon, a trait which Lucille Ball was famous. On a different level, but no less effective, Javier Bardem does not mimic or imitate Desi Arnaz but captures the man’s essence on the screen. As with Kidman, I was skeptical of Bardem pulling it off, but he does so with humor and charm.

Although it clocks in at over two hours, there is not a wasted minute throughout as we watch the week play out with personal drama and the ethic of putting on a show no matter what. For those of us who watched “I Love Lucy,” it is a return to another time and the movie does not sugarcoat that time.