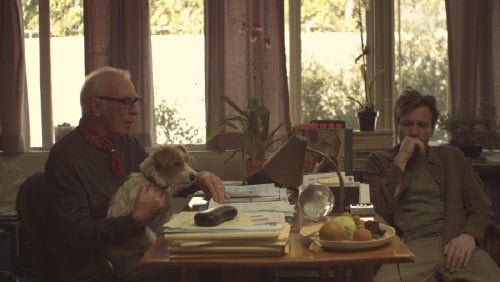 After his wife dies, seventy-something Hal (Christopher Plummer, "The Sound of Music," "The Last Station") tells their only son Oliver (Ewan McGregor, "Star Wars: Episodes I-III," "The Ghost Writer") that he is gay and wishes to live out his remaining years as an active homosexual. Then he's diagnosed with terminal cancer. Recovering from his grief, thirtysomething Oliver, who has never been successful in a relationship, meets the unconventional Anna (Mélanie Laurent, "Inglourious Basterds," "The Concert"), and takes a page from his father's fabulous last years. Late in life both Hal and Oliver become "Beginners."

Using his own experience, writer/director Mike Mills ("Thumbsucker") has created a touching father/son film using the clean aesthetic style of a chic gallery collage show. The odd combination works, the freshness of the visuals an artistic parallel with the newness of Hal and Oliver's experiences. There are other pairings in "Beginners," too, like the obvious parental influence that has shaped both Oliver and Anna and the way both Hal and his wife, Georgia (Mary Page Keller), had to suppress their true selves living in the 50's. Mills uses multiple timelines - the present, the recent past and Oliver's childhood - to great effect, bridging them with montages which mirror Oliver's work as a graphic artist, which he describes as 'historical consciousness.' The film begins with one of these still montages, as Oliver narrates the year of his parents' marriage using touchstones that will be repeated in others. Cut to the son clearing out the family's modern, airy Santa Barbara home after Hal's death. He's inherited Hal's dog, Arthur, a Jack Russell terrier who clings to memories of his former master, whining whenever Oliver tries to leave him (in the film's most charming device, Arthur 'talks' to Oliver via subtitles). Oliver tells us about his dad as we're watching Christopher Plummer's Hal morph from an academic into a rainbow flag waving, bandana wearing gay man with an active social life and younger boyfriend Andy (Goran Visnjic, TV's 'ER,' "The Deep End"). Even after he's diagnosed with inoperable cancer, Hal remains spirited, refusing to tell Andy, gathering his new friends around him as often as possible. Oliver may be a bit bemused, but, as we come to learn, he only really comes to know his dad after his mom's gone. That's because Oliver spent most of his childhood alone with the bohemian Georgia, a woman who hid her Jewish heritage (reflected in a 1938 year of birth montage) behind artistic pursuits. Many flashbacks recount the playful mother son relationship with a mother who could be embarrassing, but who was also letting out a primal scream from within a passionless marriage (Mills repeatedly uses the same shot of Hal perfunctorily pecking Georgia goodbye after which she raises her hands in consternation.) 'Jews have more emotions,' Georgia explains to Oliver. Mills also uses music to distinguish the two, old timey ukes and piano rags signifying mom, more classical when Hal is center stage. It might be a bit obvious when Oliver is finally dragged out by friends, that he chooses to dress as Freud for a Halloween party, but it's clever than when Anna takes to his couch she's suffering from laryngitis. They're both 'hiding' behind masks as it were, the shy guy asking the questions of the actress who is temporarily speechless. Anna turns out to be literally hiding from a father who is like a ball and chain of need, her flighty quirkiness a flee response, whereas Oliver grows bolder after experiencing his dad's newfound freedom. Will this new generation succeed? McGregor is ostensibly the star here and he gives another good performance after bouncing back from the morass in last year's "The Ghost Writer." He and the charming Laurent, who seems to be pulling hints of decades past performances from the ether, have a nice enough chemistry that we want to see them together. Goran Visnjic brings a nice balance of charm and innocent mystery to Andy and Mary Page Keller makes Georgia a complex, storied mom. But the film belongs to the irrepressible Plummer who radiates an infectious joy of life and whose spirit watches over all. And then there's Arthur. Mills's homage to his dad is a very complex, his script chockful of ideas and symbolism and parallels and art and emotion, and yet so simply heartfelt. Those 'collage' still montages and the film's nonlinear timeline give the work an impressionistic feel, yet it's look (cinematography by Kasper Tuxen "Princess," "3 Backyards;" editing by Olivier Bugge Coutté "Reprise") is razor sharp, bright and clean. There's a beautiful metaphor in a question Hal asks Oliver about lions and giraffes, spoken from the perspective of a man of the 1950's, but when Oliver reflects on Hal's historical use of a passage from 'The Velveteen Rabbit,' damned if Mills hasn't made it stand for Hal's rebirth.