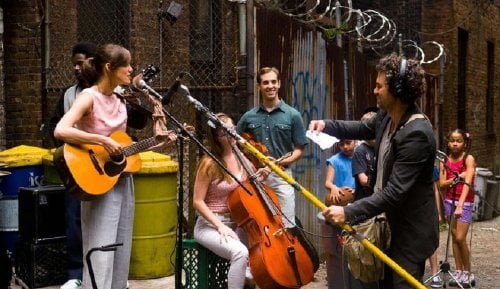 When Dave Kohl (Maroon 5 frontman Adam Levine) gets a recording contract, he and his songwriting and life partner Greta (Keira Knightley, "Anna Karenina") move to New York City, but the temptations of fame wreck havoc with their relationship. Meanwhile Distressed Records founder Dan's (Mark Ruffalo, "The Avengers") inability to land commercial talent since his own life fell apart costs him his job. On the night before she intends to leave for home, Greta's buddy Steve (James Corden, "The History Boys," the upcoming "One Chance") coaxes her onto an East Village stage where she catches Dan's ear and together Greta and Dan find the will to "Begin Again."

If music was the form of communicative consummation for the impossible lovers of the heartbreaking "Once," writer/director John Carney uses song this time around as a method for finding one's own voice. Beginning with the scene that unites his protagonists before rewinding twice to show us how each found themselves in a sad place, Carney turns to hope and new beginnings for his second modern musical As the machine led by an unctuous CEO (Rob Morrow, TV's 'Northern Exposure) begins to hum around Dave, Greta recedes into the shadows. When he returns from a trip to L.A., she can read on his face that he's cheated (Jennifer Li, paying record label assistant Mim, radiates trouble in the instant we see her). Meanwhile Dan's diving into the bottle (his 5 second assessments on demos as he drives his black Jag to pick up daughter Violet (Hailee Steinfeld, "True Grit") is hilarious) and when he gets no emotional support from ex-wife Miriam (Catherine Keener, "Enough Said") a bender is the option he chooses. But through his alcoholic haze, Greta's soft song about finding oneself alone in the city sparks his interest, if not the crowd's. In a delightful fantasy, we see him add playerless instrumentation around her, producing her song. He gets her to agree to visit his former CEO, but Saul (hip hop artist Mos Def, "Be Kind Rewind") needs more convincing. As the two discuss making a demo on a city stoop, Dan gets an idea - record the album in the various neighborhoods of the city. If the music (Gregg Alexander of New Radicals) isn't as distinctive as "Once's," Keira Knightley's ethereal delivery and confident phrasing surprises - if you heard her on the radio you'd easily accept her as a folky pop artist. She and Levine are convincing as a fresh-faced couple from the heartland and Knightley makes us feel her betrayal to the core. Ruffalo's terrific here, a man whose passion for music has turned cynical, but who still struggles on as his demons devour him. A montage of the two walking about the city sharing playlist guilty pleasures tethered by the splitter Dan once used with his wife is a mix of the old (music) and new (technology). A brush off song recorded by Greta and Steve to Dave's voicemail is a parallel, using music to connect a character to their previous life. Carney keeps up abreast of Kohl's rising star as Violet is melded into Dan and Greta's recording sessions (partially underwritten by Dan's former superstar client Troublegum (Levine's fellow 'Voice' coach, CeeLo Green)). The film's climax is both a paean to the indie music spirit and a commentary on the industry. "Begin Again" is a wistful breeze of a film, the perfect antidote to summer's cacaphonous blockbusters.