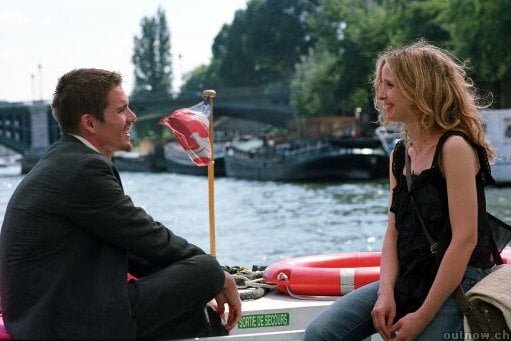 Author Jessie Walker (Ethan Hawke, "Training Day") is giving a reading at the famous Shakespeare & Co. bookstore. As Paris is the last stop on his book tour, he admits that yes, the woman who he spent one night with in his book, was, in fact based on a real woman and real encounter. Then a glance through the window reveals Celine (Julie Delpy, "Before Sunrise"), his romanticized lover of nine years earlier. Assuring his driver he will return in time for his flight, Jessie departs with Celine to catch up on all that has happened since "Before Sunset."

Writer/director Richard Linklater ("Waking Life") partners with stars Hawke and Delpy to create a real time two-way conversation (based on characters by Linklater and Kim Krizan) about life and the nature of love in a sequel that reunites one of cinema's most sparkling romantic pairings. The open-ended hope of "Before Sunrise" was epitomized by the youth of its lovers. "Before Sunset" exudes all the encumbrances of maturity - caution, despair, regret - while celebrating the benefits of life experience and anticipation of possibilities long yearned for. You don't have to have seen "Before Sunrise" to appreciate "Before Sunset," as Linklater provides just enough flashbacks in the film's early going to give a sense of what came before. Celine suggests a local cafe where they can spend a few minutes (she's more conscious of Jessie's ticking clock than he) and the two begin to tentatively reconnect. It's only a few minutes before Celine asks the big question - did he show up for the meeting they had set all those years ago when they didn't have each other's address, phone number or even last name. Turns out he did, she didn't, but only because her beloved grandmother, who she had been on her way to visit when she met Jessie, died the day before. Fate. Both attempt to keep things light as they discuss what they've done with their lives, but the extremity of their earlier feelings keeps poking through in give away details. Jessie spent four years writing his book (all that time for one evening, Celine ponders). Celine has never found a man who really inspires her. They both keep retreating with bursts of 'I'm kidding,' then draw back towards one another like magnets. A bombshell is dropped when Celine asks about Jessie's family - something she's known all along that has been kept from us - and Jessie talks about how he adores his son, but on the way to his wedding he saw a woman on the corner he could have sworn was her and almost stopped. They discover they both lived in New York City at the same time. Celine lived two blocks from that corner. Fate. Director of Photography Lee Daniel ("Before Sunrise") takes a very different approach for the sequel, using steadicam for extended, uninterrupted moving takes. The focus never shifts from Hawke and Delpy, who also never stop moving except for a brief cafe stop, and Daniel's tracking shots through the narrow Parisian streets are extraordinary. When the characters sit inside the back of a car or on a boat, it's the landscape that moves, all washed in the light of a sun slipping away. Hawke and Delpy are both fabulous sliding right back into their characters like a second skin, making the complex talk seem utterly natural within the long takes. He's become a little battle scarred while she's become a bit high-strung from life's disappointments. They're both flawed but keenly intelligent individuals with palpable chemistry. One of the most amazing aspects of "Before Sunset" is how conversation alone is made so suspenseful. If this movie were a book it would be described as a page-turner. And when it gets to its last scene, all Nina Simone and Delpy threatening to sing a song about her cat before playfully laying her soul bare in Delpy's own "You're So Vain"-like composition, it reaches a new pinnacle. The ending could not be more perfectly played or more perfectly written or once again left more deliciously ambiguous (and possibly foreshadowed by the fictional part of Jessie's book that his editor made him remove). Hawke's last line - two common words - combined with a quick fade to black make up one of the most extraordinary endings in movie history.

Jesse (Ethan Hawke) and Celine (Julie Delpy) spent a magical, romantic night together in Vienna, ending with the promise to meet again in six months. Nine years later, Jesse, now a best selling author, is in Paris touting his new book. As he answers questions and autographs copies of his novel he spots Celine watching him from the sidelines. He flight home leaves that evening and, once again, they only have a short time together with a whole lot of questions to be answered in Richard Linklater’s “”Before Sunset.” Writer/director Linklater has created a true labor of love with his follow up to the charming romance, “Before Sunrise.” Back in 1995, the oh-so-young Ethan Hawke and Julie Delpy showed a remarkable amount of chemistry with each other as Jesse and Celine meet on a train traveling from Budapest to Vienna then spend the night wandering the latter city and fall in love, before Jesse boards a plane the next morning. It was a talkie kind of movie as the young couple discuss their lives, dreams and ambitions. When they part, they pledge to meet in six months time and, as the credits rolled, you genuinely hoped they would. Now, nine years have passed and Jesse is talking up his new book at the Shakespeare & Co. book store in Paris. From the gist of the questions and answers you gather that the pledge went unfulfilled and Jesse’s book is his response. Then, he sees Celine. He asks her to have a coffee with him to kill time before he gets on yet another plane heading home. She agrees and the two pick up where they left off, only they are older, hopefully wiser, and much more cynical. Helmer Linklater cowrote the screenplay of this little charmer in collaboration with Ethan Hawke and Julie Delpy and the trio have done an amazing job. Jesse and Celine may have picked up where they left off nine years ago, but they are very different from the fresh faced, innocent pair we met in Vienna. Jesse has become an author of some note and Celine has made a career as an environmentalist. They have both been successful in their work, but they have not fared so well with other aspects of their lives. As the camera follows them through the streets of Paris they freely discuss what kept them from meeting on that Viennese bridge years ago. The chemistry that Hawke and Delpy developed in “Before Sunrise” is back, again, in spades as they tell each other about their lives, loves and losses. They are both a little tougher and more cynical, now, because of their life experiences but the attraction between them is undiminished. As the time before Jesse must leave dwindles away, there is an urgency to their meeting as they have so much to say and so little time to say it. As I watched “Before Sunset” I found myself wishing I could turn back the clock to give the couple more time together. This wish, alone, shows just how much magnetic energy these two characters (and the actors playing them) have. Techs are simple but elegant. Lee Daniels’s fluid lensing keeps things tight on the two stars as they walk and talk through the Parisian streets and along the Seine. The city is a beautiful backdrop for these beautiful people but the camera reserves its unblinking eye for the couple. This is definitely not travelogue material. You won’t get a bunch of F/X here but you do get a finely crafted and superbly acted romance. Hawke and Delpy are worth the price of admission for “Before Sunset” as they talk about everything under the sun, from careers to personal relationships to the environment. There is a rushed feeling as they try to tell each other everything but have only a short time to do so. The ending is beautifully handled with its note of hopeful ambiguity. The one thing I hope for after seeing “Before Sunset” is that Linklater and his stars will visit us again in eight or 10 years time.