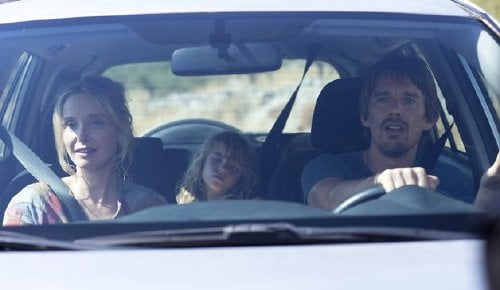 We met them when they found each other as young twenty-somethings in Vienna, then reunited with them almost ten years later when a chance meeting during Jesse Walker's (Ethan Hawke) book tour in Paris rekindled their spark. Nine years later we find Jesse and Celine (Julie Delpy) in Messinia, Greece, where they have been spending six weeks with their young twin daughters at a writers' workshop in the home of ex-pat Patrick (Walter Lassally, the Oscar winning cinematographer of "Zorba the Greek," in his acting debut). Conversation flows easily, but Celine is growing tired of being Jesse's muse, afraid of losing herself, and tension between the couple will bloom "Before Midnight."

With this third film, cowriter (with his stars Julie Delpy & Ethan Hawke)/director Richard Linklater ("Before Sunset," "Bernie") has fallen into his own fictional, couples version of the "Up" documentary series. "Before Sunrise" was hopeful, young romantic idealism turned into a more regretful, cautious adult passion in "Before Sunset." Hawke and Delpy both slip right back into older versions of their characters, this time reflecting the strains placed upon long term relationships. The film has received passionate praise since its debut at Sundance, but although the filmmakers have surely chosen the right path this third time around, the footing is not always as sure as in prior films. The last time around, we received a marital status bombshell at the midpoint (as we will again here), learning that Jesse is married with a child. Now he is divorced and his new family is seeing his son, Hank (Seamus Davey-Fitzpatrick, "Moonrise Kingdom), off at the airport, heading home to mom in Chicago. For fourteen minutes we follow Jesse, Celine and their girls in their car as they head back to their host's home, and Celine makes a dire prediction. 'This is how it ends,' she tells Jesse, who has floated the idea of moving to Chicago to be nearer Hank. Celine is considering a new, more prestigious job in Paris and, although she loves the boy, sees no sense in moving to only spend every other weekend with him. At Patrick's stunning, cliffside home, the family falls uneasily back into its rhythms. As Jesse discusses an idea for his fourth novel with the men (85 year-old host Patrick, contemporary Stefanos (Panos Koronis) and Patrick's grandson Achilleas (Yiannis Papadopoulos)), Celine prepares the evening meal with Stefano's wife Ariadni (Athina Rachel Tsangari, "Dogtooth") and Patrick's lady friend Natalia (Greek acting legend Xenia Kalogeropoulou). This arrangement typifies Celine's current discontent, which she begins to voice during dinner, albeit under the guise of scintillating conversation. It is notable that the three couples with whom they dine represent a current representation of their first meeting in Anna (Ariane Labed, "Alps") and Achilleas, a young couple who tackle separation via Skype; the middle-aged Stefanos and Ariadni, less conflicted with no children; and the older couple they might yet become. The group has gifted Jesse and Celine with an evening alone in a chic, seaside resort, Ella and Nina (Jennifer and Charlotte Prior) to stay at Patrick's for the last night of the trip. After dinner, Celine tries to back out, offering various excuses, but it will not be heard of. The couple walks to the hotel, where Celine is resistant to signing copies of Jesse's first two books, based on their first two experiences. Once in the room, they begin to relax, but when Celine takes a phone call from Hank, tells him 'good luck with your mother' and hangs up, the stage has been set for anything but romance. The 'walking and talking' aesthetic of the first two films has settled down a bit here, now more sedentary with age and, ironically, it's when we first follow the two walking again that the film hits a snag. Jesse and Celine are still able to flirt and make each other laugh, but the way their conversation so immediately leaps from the everyday to the theoretical feels unnatural, scripted. The argument which begins with Jesse's criticism of Celine's handling of his son's call is entirely organic, as are the resentments which Celine finds every which way to inject into the conversation. Celine becomes more intent on the fight the more Jesse tries to approach things from an even keeled distance, a natural reaction perhaps, but it is somewhat irksome to see the female cast as hysterical while the male maintains a 'level head.' (For the large part of the film, Delpy wears the most unflattering blue polka-dotted dress, one assumes to highlight aging (it gives her a paunch), but Hawke is dressed youthfully, in old rock tees. For a film that delves into the differences between men and women, there is an nagging underlying sexism, ironic given that Delpy had a hand in it. And yet there is truth here too.) Jesse blows an early opportunity to be romantic, but he more than atones by evening's end. Still, the film wraps on a conciliatory note, a truce of sorts. Where will this couple go from here? One hopes we get the chance to find out.

18 years ago, Jesse (Ethan Hawke) and Celine (Julie Delpy) met cute for one magical night wandering the streets of Vienna until they had to part in the morning. They met again, nine years later, in a bookstore in Paris. Now, they are together again, but, this time, it might be for keeps in “Before Midnight.” When Richard Linklater, Ethan Hawke and Julie Delpy first collaborated on “Before Sunrise” in 1995 it was a new idea in story telling, acting and technical acuity. The story, director and stars were young and fresh at that time and we wallowed in their youthful exuberance and invincibility. After we meet them again in 2004 in “Before Sunset,” they are more mature and, yes, cynical and we are left with the question: will they ever get together? In our present time, nearly two decades later since the start of this personal adventure, they answer the question when we see Jesse and his 10-year old son, Hank (Seamus Davey-Fitzpatrick) parting ways at an airport in Greece. The boy has just finished his summer vacation with his father and now must go home to his mother. Jesse wants to live nearer to his son to spend more time with him but he drives away and head back to the arms of…Celine! What follows stays to the formula the filmmakers have used twice before. The couple walks and walks and walks while they talk and talk and talk, this time with rural Greece as the film’s sunny locale. Jesse and Celine are all grown up and middle-aged. As is often the case, Jesse, the man, remains cool and philosophic while Celine has become more dowdy and housewifely. (The costumers smartly dress Delpy in a matronly garb that is designed to enhance Celine’s dowdy look.) What “Before Midnight” brings to the table is the familiarity of the two characters to the audience and the chemistry between Ethan Hawke and Julie Delpy. They fit like a well worn but warm glove as the dynamics of their relationship – will Jesse stay or go to Hank without Celine? – play out. The problem I have, though, is that the actors are so comfortable in their roles, they cease to be real. They are more like an impression, by the filmmakers, of how these characters would grow. Unfortunately, they regress to their youthful assurances of what they think is true. It often is not. I read one critic’s comments on “Before Midnight” and he wondered what the next installment would be: “Before Bingo”?