Before I Go to Sleep 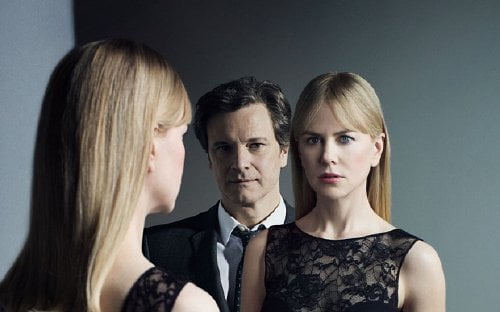 Christine (Nicole Kidman) awakens and you know that she does not know where she. Next to her is a sleeping stranger (Colin Firth). She wanders out of the room and finds a wall covered with photos of her and the man in the bed at various stages in their life together. Soon, she learns that she suffers from amnesia that refreshes itself daily. With the help of neuropsychologist Dr. Nasch (Mark Strong), she must find a way to restore her memory “Before I Go to Sleep.”

Every day, Christine Lucas (Nicole Kidman) awakens to find a strange man in her bed. When she goes into the bathroom, the face that looks back at her is much older than her 27 years and a montage of photographs reveal the stranger to be her husband. Ben (Colin Firth) calmly comforts her before he leaves for work, bringing her up to date on the accident that left her with psychogenic amnesia, but one morning she gets a call from a Dr. Nasch (Mark Strong, "Sherlock Holmes"), who guides her to the camera she's kept hidden from Ben, recording a video diary which gets more alarming each day in "Before I Go to Sleep." Writer/director Rowan Joffe (2010's "Brighton Rock") attempts to turn the S.J. Watson novel into a twisty thriller, but what we get is a tasteless mess full of plot holes and red herrings that its stars should have shoveled under the carpet. Kidman elicits no sympathy, sleepwalking through her role as a woman whose memory rewinds every time she goes to sleep while Firth continues his perplexing career choices. Adam Sandler was far more appealing in "50 First Dates." Pity poor Anne-Marie Duff (UK TV's 'Shameless,' "Nowhere Boy") as Christine's friend Claire, whose makeup appears to have been sourced from a Crayola box. Joffe's so enamored of his flashbacks, which features a horrifically battered and bloody Kidman, he recycles it for his climax. "Before I Go to Sleep" isn't merely bad cheese, it's Limburger. Grade:

Good actors do not always make cheesy melodrama better than it is and this is the case with writer/director Rowan Joffe’s adaptation of S.J. Watson’s novel. Almost from the film’s start, the scope of Christine’s amnesia – each day starts out with the same blank slate – is laid out. The man in bed is Ben, her husband of 14 years. He patiently explains the accident that caused her illness and how to cope with it before she goes to sleep that night. After Ben kisses her and heads off to work, she gets a phone call from Dr. Nasch, who tells her to find the camera Christine had hidden the previous day. On it is Christine leaving a video message for Christine. The doctor hopes this will help trigger old memories for her. Now, throw into this drama a sinister, unknown bad guy responsible for her amnesia who, of course, Christine must find to make herself complete again. The story, I do not know if it is faithful to the novel or not, is merely a dramatic “50 First Dates” with lots of twists – not many believable – that propel the film to its confrontational conclusion. Nicole Kidman is OK as the troubled Christine and Mark Strong is serviceable as the doctor who may be her saint but could be her demon. Oscar winner Colin Firth, on the other hand, is wasted (maybe literally?) as the enigmatic Ben. This is really a B-movie posing as an A-movie and I do not buy it. What Joffe thinks is a twist to the plot is just a fake out to the audience that I recognized right away and misdirection, which is frequently used, is not done well. The holes in the story logic and the obvious bad guy – no surprise for me – make for a film that does not deserve theatrical release – especially in the face of other, better films fighting for the real estate of the big screen. I, personally, would not even recommend renting it. “Before I Go to Sleep” will not keep me from doing so.