Before I Forget (Avant que j'oublie) 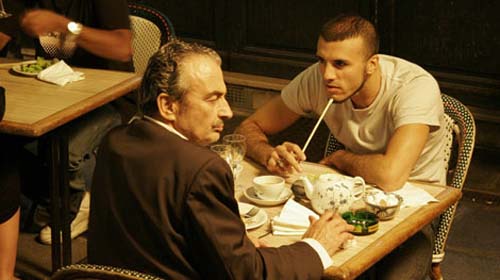 An aging gay Parisian, Pierre Pruez (writer-director-star Jacques Nolot), is having coping problems with life. A writer suffering from writer’s block, an ex-gigolo who has had to cope for years with being HIV-positive and, in his waning years, ever mindful of money and his finances, Pierre has taken on a cynical acceptance of life and what it had dealt him in “Before I Forget.”

This distinctly melancholy portrait of a sixty-year-old gay man coping with age and economic uncertainty is an outstanding work by writer/director/star Jacques Nolot ("Under the Sand"), whose elegant, polished exterior hides an increasingly debauched and diseased body. Pierre Pruez spends his days smoking, trying to write, hiring gigolos and visiting old friends, many of whom, like his lawyer Georges (Jean Pommier), are tired of listening to him complain. Pierre is taken aback by younger man Marc's (Bastien d'Asnières) desire to take him to a club turned out 'like a handbag queen,' and relates this story to friends as he also looks back to the days when he was a Marc to his long time benefactor. But his $15 million franc inheritance has been swept out from under him by his lover's family. Pierre tells lunch partner Paul (Marc Rioufol, "48 Hours a Day"), a man whose fortunes are the exact opposite of his own, about how he was too naive to protect himself and his lover too careless to file his will with a lawyer and relates breaking into the man's home to get what little he could. Later, in an auction house, an entire life's memories are laid out as merchandise he cannot afford to buy. Three times a week he talks to his shrink (David Kessler) and he wrestles with the drugs provided to treat AIDS, most with side effects he considers worse than the disease. He frequently talks of suicide. In the end he chooses life - or does he? With great dignity in lace, a black wig and heels, Pierre smokes a cigarette, Nolot having us observe the entire time, before walking slowly into a black void. Nolot and his cinematographer Josée Deshaies ("Heartbeat Detector") use chiaroscuro lighting to great effect throughout the film. The visuals are stunning, as is the use of music. Like many recent French films, Nolot's script deals with many social issues. Pierre, being a gay man outside of the usual working world, has more challenges than most, especially when it comes to health care. The character of Pierre Pruez has appeared in four previous films - at 17 and 30 in Andre Techines' "I Don't Kiss" and "La Matiouette" and at 50 and 55 in Nolot's own "The Hinterland" and "Porn Theater." But you don't have to have seen any of these films to appreciate the sixty year old version. "Before I Forget" is unforgettable.

I am a 65-year old, male film critic. So, what am I doing reviewing a YA version of “Groundhog’s Day”? I am damned if I know, but here goes. It is not just another day for Sam as she is forced awake by her nudgy little sister, Izzy (Erica Tremblay). It is Valentine’s Day and she plans to, finally, give herself to her boyfriend, Rob (Kian Lawley). She heads off to school with her three BFFs – Lindsay (Halston Sage), Elody (Medalion Rahami) and Ally (Cynthy Wu) – and everyone, except the lonely kids, is celebrating Cupid’s Day, replete with roses. The girls go to a party given by Sam’s childhood friend, Kent (Logan Miller), who harbors a secret crush on pretty Samantha. There, the school’s weirdo, Juliet, shows up and Lindsay decides to bate the poor girl. It ends with everyone throwing beer at Juliet and taunting her and she runs off into the night. With the evening dampened down by the nasty scene, the BFFs drive of in the rain. Something darts into the road and there is a terrible crash. Samantha wakes up to the beginning, again, of the previous day with her pain-in-the-neck little sister waking her up. Confused, at first, she begins to realize that something extraordinary has happened. The trouble is she does not know why it is happening. Here is where “Before I Fall” borrows from, but does not follow, the “Groundhog Day” playbook. She sees, as the day keeps repeating, that she can make a change and right the wrongs she made in her young life. “Before I Fall,“ directed by Ry Russo-Young with the screenplay by Maria Maggenti, is aimed at the femme teen audience and, while it misses the target by a mile for me, the aforementioned 65-year old, male film critic, it hits its intended target squarely in the center. The lead character, Samantha, is sympathetic and, as we get to know her, shows emotional growth and change – for the better. This positive message about caring for others above self made even me feel good.