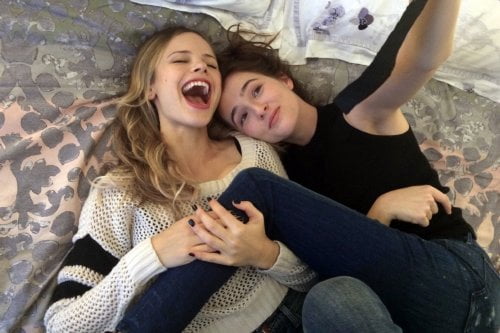 Samantha (Zooey Deutch) has the perfect life. She has the best friends, a hunky boyfriend and a bright future, until that fateful 12th of February. On that day, her life changed and she begins to relive the terrible Valentine’s Day over and over again in “Before I Fall.”

Samantha Kingston (Zoey Deutch, "Everybody Wants Some!!," "Why Him?") is one of the popular seniors at Cascadia High School. She has little time for her parents (Jennifer Beals and Nicholas Lea) or little sister Izzy (Erica Tremblay, "The Bye Bye Man"), preferring to spend her time with besties Lindsay (Halston Sage, "Goosebumps"), Elody (Medalion Rahimi) and Ally (Cynthy Wu). It's Valentine's Day weekend and Sam's consumed with losing her virginity to her boyfriend Rob (Kian Lawley), but when Lindsay loses control of their car that night, Sam is forced to reevaluate herself repeating the same day over and over in "Before I Fall." This YA film written by Maria Maggenti ("The Love Letter") and directed by Ry Russo-Young ("Nobody Walks") cannot escape comparisons to "Groundhog Day," but although it uses the same device, this is a more serious-minded message movie for teens. In repeating one fateful day, Sam will learn about the consequences of bullying, what's important in adult relationships, empathy, judgement and the importance of family. The film is far from perfect with its obvious arc and Architectural Digest model homes, but its ensemble is good and its themes worthy. On her first pass through of Friday, February 12, Sam turns off her alarm and rushes out of the house, berating Izzy for messing with her things. Her best friend Lindsay's there as usual to pick her up for school, their other two (diverse) friends in the back seat. Everyone's into singing along to the latest hot pop song and dishing about Sam's upcoming tryst. At school, it's Cupid Day and these four young women expect a lot of roses to be sent there way. Sam gets an unusual, personally selected one, but it's not from Rob (who's sent a regular red one with a snarky note). Her old childhood friend, Kent (Logan Miller, "Take Me to the River"), is carrying a torch, but she brushes him off. Anna Cartullo (Liv Hewson, Netflix's 'Santa Clarita Diet'), a lesbian outsider, mutters about the 'heteronormal hell.' Sam does go to Kent's party, where she's arranged to meet up with Rob. But he's sloppy drunk and Lindsay goes into bitch mode when Juliet Sykes (Elena Kampouris, "My Big Fat Greek Wedding 2") enters the room. They humiliate the friendless girl until she runs out, then leave. But Lindsay, who's been drinking and is a distracted driver at the best of times, swerves to avoid a truck. It is 12:39 a.m. and everything goes black. When she awakens the next morning, Sam's confused that the Kingston family is in Friday mode. She wanders through the same day, making minor adjustments. As the cycle continues, she grows increasingly frustrated. She tries to break the loop by convincing the girls to stay home that night. She acts out. But she's also learning things along the way, questioning why Lindsay's so hostile towards Juliet, opening up to Kent, spending time with Izzy and really seeing her mother for who she is. Deutch is proving to be an appealing young actress and she's convincing here, even when her character's pushed into movie conventions that don't make real world sense. Russo-Young's direction lacks subtlety. Juliet, for example, can't just be shunned, but must look like a homeless bag lady. Sam's teacher questions his class on the meaning behind the Sisyphus myth. It couldn't be clearer that Rob's a jerk and Kent the true find. But the filmmaker also achieves some very real moments, such as Sam's embrace of her mother and analysis of Lindsay's hostility. "Before I Fall" may seem trite to those over the age of sixteen, but if it gives its demographic self-searching pause in the guise of entertainment, it's done its job. Grade:

I am a 65-year old, male film critic. So, what am I doing reviewing a YA version of “Groundhog’s Day”? I am damned if I know, but here goes. It is not just another day for Sam as she is forced awake by her nudgy little sister, Izzy (Erica Tremblay). It is Valentine’s Day and she plans to, finally, give herself to her boyfriend, Rob (Kian Lawley). She heads off to school with her three BFFs – Lindsay (Halston Sage), Elody (Medalion Rahami) and Ally (Cynthy Wu) – and everyone, except the lonely kids, is celebrating Cupid’s Day, replete with roses. The girls go to a party given by Sam’s childhood friend, Kent (Logan Miller), who harbors a secret crush on pretty Samantha. There, the school’s weirdo, Juliet, shows up and Lindsay decides to bate the poor girl. It ends with everyone throwing beer at Juliet and taunting her and she runs off into the night. With the evening dampened down by the nasty scene, the BFFs drive of in the rain. Something darts into the road and there is a terrible crash. Samantha wakes up to the beginning, again, of the previous day with her pain-in-the-neck little sister waking her up. Confused, at first, she begins to realize that something extraordinary has happened. The trouble is she does not know why it is happening. Here is where “Before I Fall” borrows from, but does not follow, the “Groundhog Day” playbook. She sees, as the day keeps repeating, that she can make a change and right the wrongs she made in her young life. “Before I Fall,“ directed by Ry Russo-Young with the screenplay by Maria Maggenti, is aimed at the femme teen audience and, while it misses the target by a mile for me, the aforementioned 65-year old, male film critic, it hits its intended target squarely in the center. The lead character, Samantha, is sympathetic and, as we get to know her, shows emotional growth and change – for the better. This positive message about caring for others above self made even me feel good.