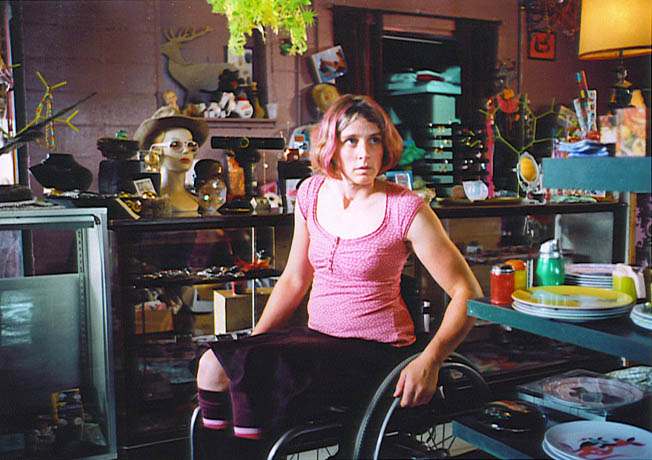 Identical twins Jeannie (Tilly Hatcher) and Lauren (Tilly's real life twin, Maggie) are both unsettled in their careers for entirely different reasons. Whereas Lauren is in between jobs, trying to get a teaching position, Jeannie is running her vintage clothing store in downtown Austin detecting signals of a lawsuit approaching from her mostly silent partner Amanda (Anne Dodge). It's Jeannie who pulls a circle of support around her, though, as she alienates others in "Beeswax."

Writer/editor/director Andrew Bujalski led off the so-called mumblecore movement with his Boston-based "Funny Ha Ha" before moving to New York for his second, "Mutual Appreciation." A change of scenery to Austin, TX, shows a distinct lack of mumble, however. These characters may still be a bit unsure of themselves, but they're out there carving out livings for themselves and have become a whole lot more articulate and sexually confident. Wheelchair-bound Jeannie is taken aback one morning when Corinne (Katy O'Connor) arrives at her store, the funky chic jumble that is Storyline, saying that Amanda had told her to 'arrive early for training.' Jeannie clearly knew nothing, yet right from the onset we get a sense of her prickly nature - she has Corinne answer the phone, makes a few criticisms, then wheels herself out back to keep the conversation private (it's Amanda). At home that evening she and sister Lauren read her and Amanda's agreement, which has words to the effect of 'not because we don't trust each other but...' yet clearly there is something wrong and the fact that the contract was drawn up by Amanda's father has Jeannie feeling at a disadvantage. Jeannie contacts ex-boyfriend Merrill (Alex Karpovsky), who is about to take the bar, to give her advice. Meanwhile Lauren, who has just shed herself of an unfulfilling relationship, goes for an interview, must back out of a promise to help their mom move her office, and finds out that although she has not gotten the teaching position she will receive an offer to fly to Nairobi the very next week to teach English. Writer Bujalski and his star Tilly Hatcher have created an extremely complex character in Jeannie - one, it should be pointed out who is often difficult to like. In fact when Jeannie finally faces off with Amanda, even though her former friend isn't exactly upfront, the criticisms she does voice about Jeannie's handling of the business ring true (Jeannie calls them 'mean'). And if Bujalski's latest makes one concession to adolescence it is in the often weirdly childish way Jeannie has of putting things. In order to assist her, Jeannie's ex (or is he still?), is willing to delay taking the bar and yet, when they travel to meet one of Merrill's friends, Tom, as a potential backer, Jeannie insists he enter the diner without her even though it means finding a stranger to assist her with her wheelchair (the meeting itself is awkward, Tom smelling opportunism over friendship, especially when it is clear Jeannie and Merrill have nothing resembling a business plan). Later, Lauren will also make a sacrifice (although Bujalski is wily enough to suggest it may be a self-serving one) to support her sister. "Beeswax" could be seen as a metaphor for the filmmaking process, with Amanda as a producer with financial backing and Jeannie as the director fending off difficulties on the front lines - the store is called Storyline after all - but this seems too pat, even if it is the dysfunction of the partnership that drives most of the narrative. Instead of mumble, this film seems to be more about ambiguity and indecision. Jeannie is not sure that Amanda's father's contract was drawn up in a way that puts her at significant disadvantage, but she seems to be spinning her wheels trying to figure out what to do about it. Even in her passive aggressive treatment of employee Corinne, Jeannie plays devil's advocate six ways to Sunday trying to get Corinne to admit that her attendance at a rally will cause her to miss her shift (Corinne's response - that one can be 'punctual and righteous' - is proof of some of the deft use of language Bujalski's characters are now capable of). Bujalski, working for the first time with Super 16 and a widescreen format, has devised a gorgeous tangerine and lime color scheme, the peachy oranges often reflected by the lighting, the limes often used in clothing. When Jeannie tells Corinne to 'make the store' hers, it looks like Corinne's already wearing it - the store dictates the art direction throughout the film. But, he also sometimes frames things unattractively - an under-the-chin shot of Jeannie and Merrill sucking face on a bed is a warts and all approach to a sex scene that had me cringing along with Jeannie's character traits. I had trouble embracing Bujalski's latest, having been a fan of the first two, and yet it has lingered. "Beeswax" says as much about these thirtysomething hipsters as his earlier films did about their just-out-of-college slackers - it's just that the younger generation is more cautious, more fumbling, about exposing their emotions.

I enjoyed Andrew Bujalski’s first two films “Funny Ha-Ha” and “Mutual Appreciation” and I looked forward to “Beeswax.” But, I was disappointed, mainly by the casting of two key actors, the sisters, wheelchair bound Jeanie (Tilly Hatcher) and Lauren (Maggie Hatcher), with real life twins who apparently have little acting experience. Their self-conscious first-time performances, often mumbling into their hands, are distracting and often took me from the moment. Better is the character Merrill (Alex Karpovsky), a law student and Jeannie’s lover, who shows a surprising amount of presence as a friend and protector. Other characters are OK if not entirely believable. Bujalski’s dialog is stiff and often unconvincing. I expected more his third time out, not more of the same. Production is obviously low budget.