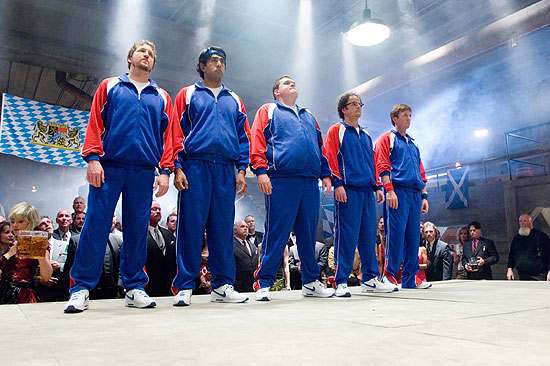 Todd and Jan Wolfhouse (Erik Stolhanski and Paul Soter) go to Oktoberfest to spread their grandfather's ashes and discover an underground beer drinking competition, a secret Munich Olympics, where they are humiliated by their less than gracious German cousins. Incensed, the Wolfhouse brothers return to the U.S. and assemble a team to be taken seriously when they return the following year for "Beerfest."

The Broken Lizard comedy troupe, who all star and are cocredited as writer/producers, didn't make anyone anticipate their third film after "Club Dread," their dreadful followup to their very spotty, occasionally funny debut "Super Troopers." But while consistency still isn't their strong suit, "Beerfest" is a big, foamy head above their first effort. Silly, very un-PC, often laugh-out-loud funny and refreshingly short on bathroom humor, "Beerfest" is "Strange Brew's" endearingly ungainly cousin. After setting up its premise, "Beerfest" features a gathering of teammates that includes a guy who masturbates frogs for a living (the gag actually works) and a male hustler, a training sequence where ram's piss is consumed and one member passes out with a mouth full of ham and a competition made up of beer pong, the monkey chug and Das Boot! And speaking of 'Das Boot," that film's star, Jurgen Prochnow, costars as Wolfgang, head of the nasty German side of the clan. The actor proves a good sport, even piloting a U-Boat again - in Colorado. Other treats include Cloris Leachman ("Spanglish") as Great Gam Gam, the supportive Bavarian Oma whom Wolfgang accuses of being a hooker (and evidence keeps mounting up, much to the boys' dismay) and Donald Sutherland, in a brief but funny turn as her son, charged with stealing the von Wolfhouse beer recipe. Jay Chandrasekhar, who has directed all three Lizard films, is Barry, the male hustler who rejoins the pack as its best drinking game player. Team U.S. is rounded out with Kevin Heffernan as Landfill, and then as Landfill's twin brother (who just steps in and becomes Landfill in an amusing nudge-nudge, wink-wink writing gag), and Steve Lemme as Fink, the Jewish genius who sports a yarmulke for every occasion. These guys really come up with some inspired lunacy, such as the underground alleys that lead to Beerfest peopled with grotesqueries from a comic "Hostel," and the five man bicycle the boys ride in bliss. Occasionally they let a joke travel on too long, though. Barry's drunken bar pickup is funny but the morning after flashbacks takes the film off course. The whole side plot involving Mo’nique ("Domino," "Phat Girlz") is unfunny and unnecessary. But "Beerfest" quickly bounces back. Broken Lizard need a sterner guiding hand to streamline their material, but their third film is a giddy, goofy lark.