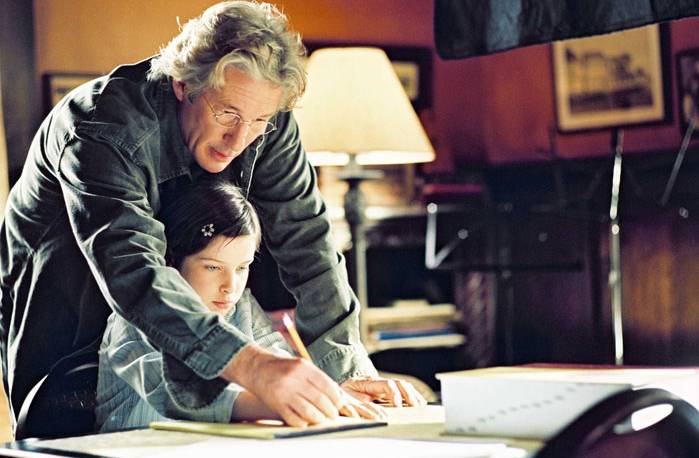 Eliza Naumann (Flora Cross) has a talent that has gone undetected by her prodigious family - she can see words forming in her head. When her Kabbalah studies professor dad Saul Naumann (Richard Gere, "Shall We Dance") finds out she's won the school spelling bee, he begins to focus all his attentions on her, believing that not only can she win a national title, but that she may be capable of the ancient mystical connection to God known as Shefa. But Ellie begins to sense that her dad's redirected enthusiasm is rupturing the rest of the Naumann family during the "Bee Season."

The Broken Lizard comedy troupe, who all star and are cocredited as writer/producers, didn't make anyone anticipate their third film after "Club Dread," their dreadful followup to their very spotty, occasionally funny debut "Super Troopers." But while consistency still isn't their strong suit, "Beerfest" is a big, foamy head above their first effort. Silly, very un-PC, often laugh-out-loud funny and refreshingly short on bathroom humor, "Beerfest" is "Strange Brew's" endearingly ungainly cousin. After setting up its premise, "Beerfest" features a gathering of teammates that includes a guy who masturbates frogs for a living (the gag actually works) and a male hustler, a training sequence where ram's piss is consumed and one member passes out with a mouth full of ham and a competition made up of beer pong, the monkey chug and Das Boot! And speaking of 'Das Boot," that film's star, Jurgen Prochnow, costars as Wolfgang, head of the nasty German side of the clan. The actor proves a good sport, even piloting a U-Boat again - in Colorado. Other treats include Cloris Leachman ("Spanglish") as Great Gam Gam, the supportive Bavarian Oma whom Wolfgang accuses of being a hooker (and evidence keeps mounting up, much to the boys' dismay) and Donald Sutherland, in a brief but funny turn as her son, charged with stealing the von Wolfhouse beer recipe. Jay Chandrasekhar, who has directed all three Lizard films, is Barry, the male hustler who rejoins the pack as its best drinking game player. Team U.S. is rounded out with Kevin Heffernan as Landfill, and then as Landfill's twin brother (who just steps in and becomes Landfill in an amusing nudge-nudge, wink-wink writing gag), and Steve Lemme as Fink, the Jewish genius who sports a yarmulke for every occasion. These guys really come up with some inspired lunacy, such as the underground alleys that lead to Beerfest peopled with grotesqueries from a comic "Hostel," and the five man bicycle the boys ride in bliss. Occasionally they let a joke travel on too long, though. Barry's drunken bar pickup is funny but the morning after flashbacks takes the film off course. The whole side plot involving Mo’nique ("Domino," "Phat Girlz") is unfunny and unnecessary. But "Beerfest" quickly bounces back. Broken Lizard need a sterner guiding hand to streamline their material, but their third film is a giddy, goofy lark.

The Nauman family is well-adjusted and happy living in their northern Californian college town. Saul (Richard Gere) is a religious studies professor and obsessed with words, Miriam (Juliet Binnoche) is a talented scientist, son Aaron (Max Minghella) is a music savant and Eliza (Norah Cross) is a normal kid. But, when she wins a local spelling bee, then the district competition, the family dynamic undergoes shattering changes in “Bee Season.” Eliza’s previously untapped talent for words becomes a catalyst for Saul, a man dedicated to the magic of letters. He sees her new ability as amazing and decides to teach her the secrets of his great passion, the Kabbalah, as her path to speak with God. This obsession resonates throughout the family as Saul begins to spend his time coaching Eliza, to the detriment of wife and son, for each next level of the spelling bee, from the regional competition all the way to the nationals. But, Eliza’s talent for words is also the catalyst that will shake up the Nauman family in profound ways and lay bare Miriam’s dark secret. Bee Season” is adapted for the screen by Naomi Foner Gyllenhaal from the best-selling novel by, Myla Goldberg, and, unusually, has a directing duo, Scott McGehee and David Siegel (“The Deep End”). The screenplay does a solid job in giving even shrift to the four Naumans. Although Eliza is the focus of the film and, in the end, the family savior, the others are all fully developed, making the Naumans a believable and deeply troubled family unit in need of being saved. As Saul immerses himself in training Eliza, using his teaching skills to coach his daughter, he is unaware that he has cut himself off from Miriam and Aaron. Miriam starts making nocturnal visits to strangers homes, taking trinkets from each for some (for much of the film) inexplicable reason. Aaron, who loved the closeness to his father, especially when they played classical duets together, begins to question the faith of his father, Judaism, and begins to explore alternatives. Bee Season” is not a simple film as each character delves into his/her own world. The Nauman family disintegrates before our eyes even as Eliza rises through the spelling ranks to be one of the chosen few for the elite National Spelling Bee. Saul’s obsession with his daughter and words estrange him from wife and son, but he doesn’t see it until a warning flare is fired high in the sky. The seemingly together Miriam has a secret that she has been able to conceal. Until now. And Aaron, rebelling against his father’s faith, goes to extremes, with the help of a pretty Hare Krishna, Chali (Kate Bosworth). The helmers keep these stories, as the lives of the Naumans fragment and shatter, evenly told with subdued, but intense, performances all around. Little Flora Cross holds her own opposite vets Gere and Binoche with her quiet, thoughtfulness. This is complimented by the varied and interesting ways the filmmakers show how the youngster forms words in her mind. The word “Dandelion” is accompanied by the vision of that flower’s windblown seeds forming the letters for Eliza. This technique, with different and varied treatments, is repeated throughout the film to very good and imaginative affect.. Richard Gere shows Saul as an intelligent man and loving father but too easily absorbed in his own world of words and the Kabbalah, which has life-changing affect on the Naumans. Juliette Binoche slowly builds up her troubled character as Miriam breaks down before us. Max Menghella’s Aaron grows up as he loses his adolescent idolization for his father and begins the process to become a man. Bee Season” is an evenly paced, interestingly told family drama that uses the innocent device of the spelling bee as the thing that changes the Nauman family irrevocably.