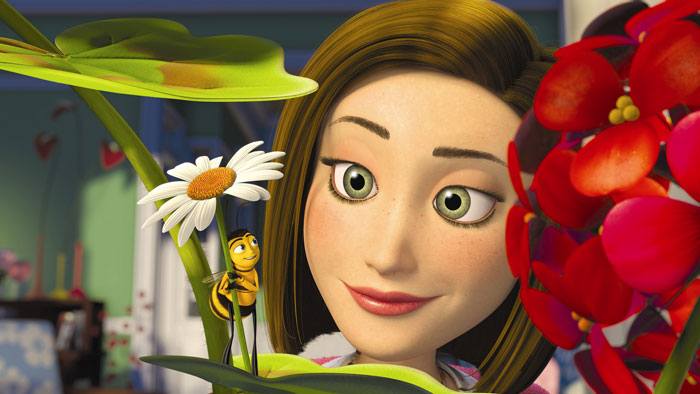 Barry B. Benson's (voice of Jerry Seinfeld) initial astonishment at leaving the hive for the first time turns into horror, then gratitude, when he is saved from death by a human, Vanessa Bloome (voice of Renée Zellweger). Taking a trip with the female florist into a grocery store, Barry discovers that the honey he toils to produce is actually sold to and eaten by humans and the furious little insect decides to take us to court in "Bee Movie."

Jerry Seinfeld's crushingly marketed (TV spots ad-infinitum, building jumping stunt at Cannes, press tour presentations, etc.), four-years-in-the-making animation project "Bee Movie" can only be called a "Cee Movie." There will be more gags and puns in the reviews of press pundits than could be found in the entirety of this film, which fails to create a bee world of any logic or surprise. Renée Zellweger's delightful vocal performance goes a long way in giving "Bee Movie" a rooting interest. Barry is introduced as the discontented son of Janet (Kathy Bates) and Martin Benson (director Barry Levinson), a housewife and stirrer for the local hive. All bees are expected to pick a job producing honey, and while Barry's best bud Adam (Matthew Broderick) is happy as a drone, Barry aspires to the dashing life of the pollen jock, the top guns of the hive. Once outside, though, after some misadventure with a tennis ball, Barry gets grounded by a raindrop and rescued by a human he feels he must thank, therefore breaking one of the premiere hive rules to not talk to humans. Despite a few amusing moments and set pieces, "Bee Movie" devolves into several cliches including good intentions producing bad results (the bees win the court case and stop working when their honey is returned) and the plane that must be landed by non-professionals. Worse yet is such utter failure in logic that dead plants can be revived by a sprinkling of pollen. The hive is a place of homes that resemble pastel pucks and bees that drive cars for no obvious reason. So for every off the wall reference ("The Graduate's" swimming pool reverie) and smart line ('They call it a crumb! And that's not even what they eat - it's what falls off what they eat!), the film thuds to earth with uninspired storytelling. Seinfeld and his writer partners should have taken Pixar's golden rule more to heart. The animation itself is not particularly interesting, all creatures looking like 3D plastic figures. Colors are alternately too vivid or washed out. Seinfeld's vocal performance is OK and Zellweger's charming, but with the exception of Chris Rock, who does a mean skeeter, most others make little impression. Celebrity appearances by the likes of Sting, Ray Liotta (rendered here with skin as smooth as a baby's) and Larry King are all forced, jammed into a plot with no need of them (the 'Sting' joke wears out its welcome quickly). In one of the many advertising spots released during the months before "Bee Movie's" opening, the animation's windshield scene was redone as a live action piece, with Seinfeld and Rock in insect costumes seemingly inspired by the old Fruit of the Loom ads. Too bad no one considered making the whole movie this way - it could have had cult success. As an animation, though, the buzz for "Bee Movie" should fade fast.