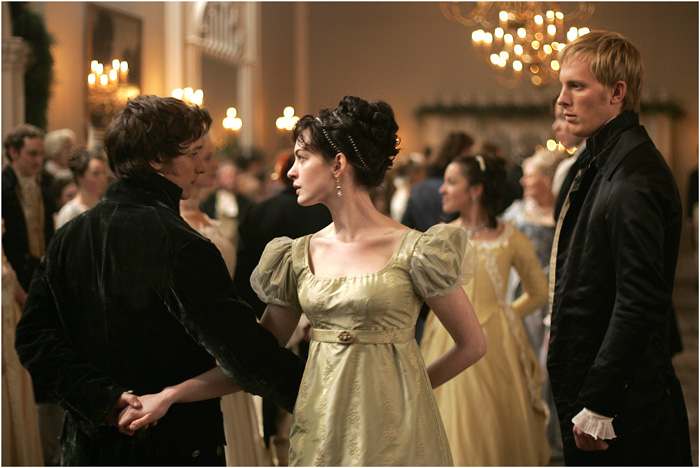 Jane Austen (Anne Hathaway, "The Devil Wears Prada") was the daughter of a country parson with aspirations of becoming an author, an impractical idea in her time. Astonishing her mother (Julie Walters) and the wealthy Lady Gresham (Maggie Smith), Jane turns down the marriage offer from Gresham's nephew that would insure her family's solvency and instead strikes up a flirtation with the scandalous and penniless young Irish lawyer Tom Lefroy (James McAvoy, "The Last King of Scotland"). He is convinced she can only become a good writer via life experience and their passionate romance sends her on her way to "Becoming Jane."

Television writers Kevin Hood and Sarah Williams concoct a 'could be based on fact' romance that provides Miss Austen with the content for "Pride and Prejudice," but that film's most recent adaptation was so assured and satisfying, "Becoming Jane" suffers in comparison. Still, rising stars Hathaway and particularly McAvoy engage us in this imagined biopic. Jane's family is introduced as a bit rough and tumble as Jane awakens a flustered household with early a.m. piano practice. Mum and Dad (James Cromwell, "The Queen," "Spider-Man 3") still have an active, saucy sex life while sister Cassandra (Anna Maxwell Martin, "Enduring Love," PBS's "Bleak House") is demurely delighted to run into her fiance in their dressing gowns. In London, we meet Jane's dashing brother Henry (Joe Anderson, "Copying Beethoven"), who spends his time with Lefroy gambling, drinking and wenching. In a scene which will be repeated, Lefroy participates in a shirtless boxing match only to get clocked when his attention is distracted by a friend. Tom and Jane's meeting is typically unpromising - she's reading a clever, if sentimental, ode to her sister's upcoming nuptials - he's been banished to the country by his benefactor, Judge Langlois (Ian Richardson, "From Hell," PBS's "Bleak House"), and is snobby and condescending. After a country dance where one overhear's the other's insult ("P&P" ref), sparks begin to fly during some witty repartee ("P&P" the 2006 movie ref). Those sparks flare when Tom presses the book "Tom Jones" on the inexperienced would be novelist. It's all here - the unwanted proposal from a man - in this case Mr. Wisley (Laurence Fox, "The Hole," "Gosford Park") - who turns out to be a better man than Jane first gives him credit for, the scandalous aborted elopement, the father who wishes true love for his daughter, the class and financial restrictions imposed upon that state. Director Julian Jarrold ("Kinky Boots") displays a more even hand here (although this film, like "Kinky Boots" seems better due to its charismatic leading man) than he did with his modern day story, both rooted in struggling against financial difficulty and 'prejudice.' "Becoming Jane" is more 'chick flick' than recent Oscar-nommed Austen adaptations, but it's cut from more or less the same cloth, albeit less durable. American Hathaway gets the accent right and an ideal leading man while support, particularly from the intriguingly arced Anderson and empathetic Maxwell Martin, is fine.