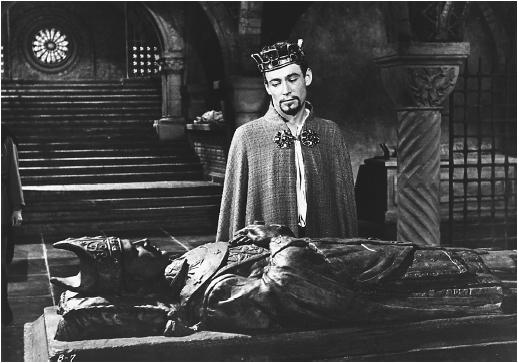 King Henry II (Peter O’Toole) and royal courtier and confidant Thomas Becket (Richard Burton) are the closest of friends. Henry shakes the foundations of power in the English church when he appoints Becket as the Archbishop of Canterbury, expecting the appointment allow Henry to control both secular and spiritual authority in England. But, Thomas takes his new position very seriously and the once friends become opponents in the battle between church and state. The king has little choice but eliminate this thorn in his side in a most deadly way in “Becket.”

When King Henry II (Peter O'Toole, "Laurence of Arabia," "Venus") needs funds for his war against the French, he decides to tax the Church and so appoints his astonished whoring buddy to the post of Archbishop of Canterbury. But old loyalties wither in the face of that friend's newfound devotion to God and Henry II is forced to turn against his beloved "Becket." This 1964 historical period classic has been restored for rerelease in theaters, but this is one film that has not aged well. Besides the times' outdated filmmaking techniques, yielding closeups of actors on unseen horseback as scenery whizzes by and costumes of too obvious a modern manufacture, the homosexual romance which may have passed as subtlety in its day today clonks one over the head with sniggering innuendo. Peter O'Toole plays Henry like Ian McKellan doing a camp cameo. Norman Henry and Saxon Thomas (Richard Burton, "Who's Afraid of Virginia Woolf?") engage in boisterous hijinks, a series of women standing in for Henry's lust for his friend. The first chink in the armor arrives when Henry covets a terrified peasant girl (Jennifer Hilary). Thomas asks for her to save her and pays a terrible price when Henry, in turn, demands Thomas' lady Gwendolen (Siân Phillip, TV's "I, Claudius," "The Age of Innocence"), who kills herself rather than go with the King. Once Thomas is made Archbishop, he more openly opposes the spoiled King, demanding the execution of Lord Gilbert for having gone vigilante on a priest rather than abiding by Church jurisdiction. Henry cooks up false embezzlement charges in order to have Becket arrested, still longing for him all the while. It's that most vindictive of lovers' spurnings - if he cannot have him, no one will. Director Peter Glenville ("The Comedians") churns out (and indeed, the film's running time is excessive) his simplistic pageant with equal measures of winking humor and pompous solemnity, which some of his actors overcome. O'Toole, a man of great talent, plays to the rafters here, although he gains some sympathy in the film's latter chapters. Burton, meanwhile, dispenses plummy proclamations (was he sucking an egg when telling his friend of the 'honor of God?'), but attains the character's stature more quickly than his colleague. Still the character's early sensitivity cannot quite compensate for his radical saintly turnabout. Bigger pleasures are to be found in small supporting roles. As Becket's fated lover, Siân Phillip holds the screen, drawing one's eye even as O'Toole and Burton spar on either side of her. John Gielgud ("Arthur," "Prospero's Books") shows just how to mix of humor and history in his spot-on rendition of France's King Louis VII and Martita Hunt's ("The Unsinkable Molly Brown") Empress Matilda is an archly challenging mother-in-law. Pamela Brown ("I Know Where I'm Going!") gives a far softer rendition of Queen Eleanor than the tart performance Katherine Kepburn would serve up four years later against O'Toole again in the same role. As the Bishop of London, Donald Wolfi's ("Lawrence of Arabia") unfortunate costuming recalls Monty Python's Spanish Inquisition. Edward Anhalt's ("Jeremiah Johnson") adaptation of Jean Anouilh's stage play features some rich dialogue ('We despise what we have wronged,' 'It's not amusing to make love to your own widow'), but the story's central conflict, a Church leader (and a potentially gay one at that) wishing to deal with its priests' predatory sexual crimes outside of state government, certainly doesn't invite admiration for its hero in today's climate of Catholic Church abuse scandal. In lionizing Thomas à Becket, the filmmakers couldn't have anticipated Cardinal Bernard Law, but nonetheless he forces a revisionist look at their movie. At best, "Becket" is an antiquated curiosity.

This 1964 costume epic will see limited release in theaters soon, with the DVD release following shortly. Does the 40+ year old film still have what it takes to attract audiences to theaters? I don’t think so. This beautiful produced and costumed drama will likely not draw new viewers and those that remember the film aren’t likely to trudge to the multiplex or arthouse to see it, especially with its pending DVD release. Is “Becket” worth seeing, though? To that, I have to say yes. It may be a little dated but two tour de force performances, a first rate supporting cast, sumptuous production values and an Oscar-winning adapted screenplay by the original’s playwright Jean Anouilh and Edward Anhalt make it a must see for the film buffs. (A good companion work to watch with Becket” is the 1968 film, “The Lion In Winter,” where O’Toole again plays a much older Henry II. To me, the latter is the better film.) The story’s relatively accurate attention to historical detail should also appeal to history fans, as it tells about the friendship (with vaguely homosexual overtones) between Henry and Thomas, Henry’s ambition to control the Church, and the confrontation that ensues after he appoints Becket, first, as chancellor, then, to the powerful post of archbishop. The film starts out in a light-hearted, almost insipid way as Thomas rescues his prince from a husband he has just cuckolded. The score over their mirthful debauchery is rather silly, considering the more somber tone the film soon takes on. Things get meaty as Henry makes his power play to wrest control of the church from the clergy and establish himself as the rightful head of his country’s state AND church. This plan misfires badly after he appoints Becket Archbishop of Canterbury and Thomas, almost killed by a zealous young monk, sees that his loyalty is, first, to the Church, not his king. “Becket” moves from power play to power struggle, a struggle that Henry is not about to lose. It will be interesting to see what kind of nostalgic extras come with the DVD release but, if you like to see your epic historical films on the big screen, this is a good looking one for it.