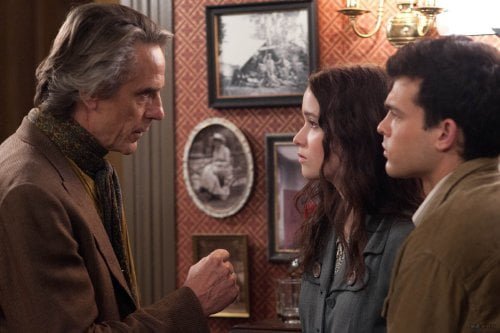 Ethan Wate (Alden Ehrenreich) wants to shake off the dust of small town Gatlin, South Carolina and move to the big city. That is, until a mysterious new girl in town, Lena Duchannes (Alice Englert), arrives at his high school and Ethan begins to think that things are not so bad in his home town when he meets one of the “Beautiful Creatures.”

Ethan Wate (Alden Ehrenreich, "Tetro") wants out of his small, Bible-thumping Southern town of Gatlin when suddenly a new arrival makes it a heck of a lot more interesting. Lena Duchannes (Alice Englert, the upcoming "Ginger & Rosa") is the niece of the notorious Macon Ravenwood (Jeremy Irons), a wealthy recluse rumored to be a devil worshipper. Lena and Ethan are drawn to each other, but Lena has a curse hanging over her - one that will cause her to be drawn into either light or darkness on her sixteenth birthday in "Beautiful Creatures." writer/director Richard LaGravenese ("P.S. I Love You") adapts the first of Kami Garcia's YA Caster Chronicles series in an obvious bid to provide product for those now deprived of further entries from the "Twilight" series and it's not half bad. The film is well cast with relative newcomers Ehrenreich and Englert conjuring up some conflicted chemistry and Jeremy Irons camps it up alongside Emma Thompson, playing the mother of Ethan's best friend, used as a vessel for Lena's not very well-intentioned mom. The movie is most successful in early goings which do not telegraph where it is headed. Unfortunately once the supernatural plotting kicks in, genre conventions crowd out originality. "Beautiful Creatures" is intelligent enough to have teens connect over Kurt Vonnegut and Charles Bukowski and Lena reveals her magical powers to Ethan in a wondrous scene where poetry quotes light up the now transparent walls to her room. The religious themes snaking throughout add additional bite, as does Emmy Rossum ("The Phantom of the Opera") as Lena's vampy cousin. Unfortunately, "The Help's" Viola Davis is left adrift as voodoo practitioner Amma, who exists, at least in this film, to provide exposition and move the plot along. Eileen Atkins ("Cold Mountain," "Robin Hood") provides some coven color as Grandmother Duchannes but as Aunt Del Margo Martindale ("Orphan," "Secretariat") is made too artificial in the film's environment, like one of the witches from "Hocus Pocus." There's a dash of "Carrie" here and a dining room scene screaming for "Beetlejuice." Costumer Jeffrey Kurland presents Irons in an ivory brocade smoking robe over a Nehru collared tunic with frog closures while art director Lorin Flemming houses him in a Gothic Plantation manse that's all black and white minimalism on the interior. "Beautiful Creatures" goes on a bit too long and the set up for the climax is a bit of a bore, but all in all it's not the same old same old. If the franchise doesn't churn over the caster mythology and focuses on character instead, this could be the start of something good.

Writer-director Richard LaGravenese heads a first-rate production in his adaptation of the first novel of the Caster Chronicles by Kami Garcia and Margaret Stohl, Beautiful Creatures. The production, though, is far better than the story it hangs on. Ethan Wate is a likable teenager with big ambitions. When Lena appears in his high school classroom, he immediately sees that she is different than the other girls. Being different is not necessarily a good thing in Bible-belt Gatlin and Lena and her family, the town’s founders, are considered evil. Some of the girls begin fervently praying out loud against her in class and, despite being ordered to stop, continue. Suddenly, the windows of the room implode, scattering shrapnel-like pieces of glass. Lena is blamed for the incident and is suspended from school. Ethan is intrigued by the pretty dark-haired Lena and he goes to her home: creepy Ravenwood Manor owned by her reclusive uncle, Macon (Jeremy Irons, chewing scenery as only he can). He soon learns that Lena and her family are not mere mortals but “casters,” immortal beings that wield great magic powers. Lena, approaching her 16th birthday, learns that she is cursed to become a caster of darkness. Ethan, though, is falling for her and believes that her inherent goodness will prevail. Throwing a wrench into the works, though, is Lena’s mother, Sarafine (Emma Thompson, having fun), who comes to town to claim her daughter for the dark side. Lena’s evil cousin, Ridley (Emmy Rossum), also arrives to assist her aunt in her mission. Macon, who put aside his own darkness to help Lena defeat the curse, stands opposed to his sister Sarafine and daughter Ridley. A tie between the Ravenwood patriarch and Ethan’s late mother brings the young man into the thick of the struggle between light and dark. This is a strange film. At over a two hour runtime, the film could have used some judicious editing to tighten it up. However, the length of the film did not bother me, mainly because of terrific ensemble supporting the young leads, including Viola Davis as Amma, a seer and the librarian of the large collection of caster magic. The production is also a star of “Beautiful Creatures” with its exquisite and imaginative sets – Ravenwood Manor is an old, Spanish moss-covered antebellum mansion, but when Ethan enters the manor, it is almost futuristic in design. Cinematographer Philippe Rousselot does an expert job in bringing out the beauties and flaws of the town. A film about magical, immortal creatures is bound to have a lot of special effects and “Beautiful Creatures” does not skimp. But special effects, a powerhouse cast and excellent production cannot mask that the original story is not very original and the big finale falls flat. I do not know if the fans of the Caster Chronicles are as fanatic as those of the Twilight and The Hunger Games books, but the first adaptation, “Beautiful Creature,” looks very good and has the feel of the opening shot of a new film franchise.