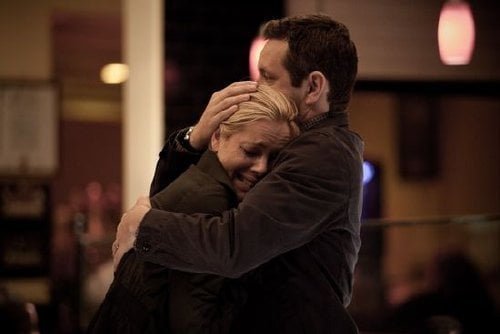 While Kate (Maria Bello, "The Company Men") is obsessing with planning the family vacation she hopes will give them another chance, Bill (Michael Sheen, "Midnight in Paris") is looking to move forward, having found a piece of real estate he hopes to make home. That night, they each speak to their college freshman son, Sammy (Kyle Gallner, 2010's "A Nightmare on Elm Street"). 'Don't study too hard' says dad upstairs. 'Study hard,' advises mom from another room. The next day, the couple will received unimaginable news about their "Beautiful Boy."

In the first of this year's 'parents dealing with child school shooter' movies, cowriter (with Michael Armbruster)/director Shawn Ku paints a moving portrait of a crumbling marriage rolling in the emotional aftershock of an only child's death. But while Bello and Sheen hit all the varied notes, Ku fails to make the film's actual template - that of a school shooter's family in the days and weeks following the crime - believable in any way. After learning of a shooting at their son's school, Kate keeps getting her son's VoiceMail. She and neighbor Bonnie (Deidrie Henry, TV's 'The Riches'), who has a daughter at the school, assure each other. Then some solemn looking police detectives arrive at the door and the news is even more than they can take in. Not only have they lost their only child, but they have now been marked by the stigma of having raised a mass killer. Their first response is to flee their home, which has, predictably, been surrounded by the media. They hide out at Kate's brother Eric's (Alan Tudyk, "A Knight's Tale") home, where Kate takes some small maternal comfort from dealing with his young son Dylan (Cody Wai-Ho Lee). But Erik's wife Trish (Moon Bloodgood, "Terminator Salvation") begins to chafe, expressing more territoriality than compassion and the two leave for a motel room, losing themselves in Scotch, sex and junk food. But Bill begins to wish to return to his life. An attempt to return to work too early is a disaster. His first return to home base finds a teenaged curiosity seeker in Sammy's room. Meanwhile Kate is comforted by her young male editor - until she finally realizes he is using her for research on a book. But we never really get a sense of Sammy other than a child pulled between two parental styles. The 'why?' of what he's done never comes close to being answered other than general remarks about the stress of college life. The parents are only interviewed by police when they receive the initial news. Sammy's room is left intact, so that Kate can make a late act find going through his things. Other than the break-in, the house is never vandalized, even though it's left empty. Bello and Sheen (doing a very credible American accent) both make us sympathize for their situation, but even though Ku puts them through multiple stages of grief, he's just left too much of the crime details out. "Beautiful Boy" is an actor's showpiece without enough story mooring.