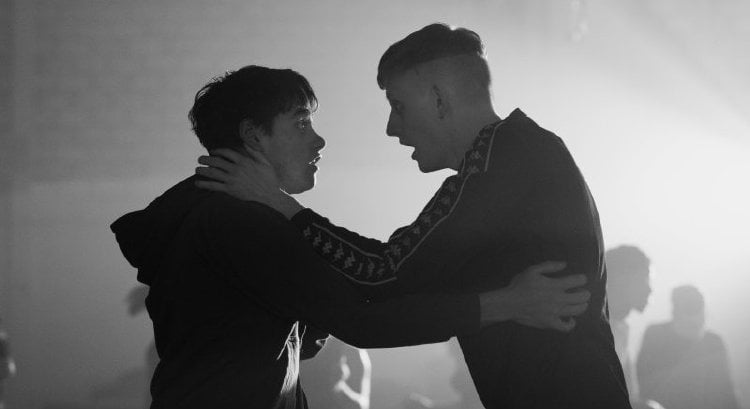 In the shadow of Great Britain's Criminal Justice and Public Order Act of 1994, which outlawed raves, fifteen year-old Johnno (Cristian Ortega) is about to be uprooted from his Glasgow neighborhood and the best mate, Spanner (Lorn Macdonald), his mother and her new police constable boyfriend believe is the worst kind of influence.  Determined to have one last blow out of a night together, Spanner steals his abusive older brother Fido's (Neil Leiper) cash and weasels an invite to radio DJ D-Man's (Ross Mann) super secret rave so he and Johnno can chase the "Beats."

Cowriter (with the play's Kieran Hurley)/director Brian Welsh’s timely film celebrates civil disobedience through a coming-of-age lens at a time when authoritarianism is on the rise and the youngest generation is at the forefront of the human rights battle.  This black and white film covers a lot of ground – friendship, class consciousness, wealth inequality, police brutality and how romance and security can play against a single mother’s maternal instincts – all set within the last gasp of rave culture.   If you’ve never experienced a rave, “Beats” immerses you in one on Ecstasy while always emphasizing how sharing the experience heightens it.

Johnno and Spanner are clearly on different paths from the get-go.  Johnno holds a job at a local market, comes from a traditional family and lives in an average home, one which is about to be upgraded.  Spanner, whose slick back haircut with shaved sides strikes fear in the hearts of conservatives adults, lives in a situation resembling squatting with an older, drug dealing brother who routinely knocks him about.  Johnno has a future.  Spanner only has Johnno.

The lads are introduced in their skivvies in their respective bedrooms, both banging to a beat Spanner’s taped off the radio to play over the phone for his friend.  Spanner picks Johnno up on his scooter and takes him to meet his older cousin Cat (Amy Manson), who hooks them up with D-Man.  Johnno naively asks Cat’s friend Laura (Gemma McElhinney) what’s wrong with her face, a black eye obviously doled out by an abusive mate – that would be Les (Kevin Mains) who also happens to be one of Fido’s boys, a connection that will prove haunt them later, as Laura turns her eye towards the younger boy.  Johnno’s called upon to grow up fast when D-Man, their ride to the rave site, proves too lit to drive and Johnno’s the only one with a clue despite never having been on a highway.  They make it.  It’s a life changing event even for some that are not there.

The moving, central heartbeat of “Beats” is how Welsh lets us see Spanner through Johnno’s eyes.  While Johnno’s mom Alison (Laura Fraser, "A Knight's Tale") thinks he’s Johnno’s ‘charity case’ and ‘scum’ and  PC Robert Dunlop (Brian Ferguson) forbids Johnno from seeing him, Johnno tries to explain that Spanner’s gotten a bad rap, that he’s a good hearted kid with a bad brother.  Macdonald is a true find as Spanner, a put upon soul with few chances in life.  The actor plays him like a bundle of love in a rough package looking for an outlet.  In contrast, Ortega makes less of an impression, defined mostly by a constant look of worry on his face.  Fraser’s picked up on this and models Alison as a more nervous version of her son.  Support is solid, Ferguson weighing his law and order mindset against an attempt at compassion that fails to make the grade.  Mann is infectiously impish.  Manson, McElhinney and Rachel Jackson are all openly adventurous, given to partying and warmer than their outward appearances would indicate while Leiper and MaIns exude hair trigger violence.

Welsh’s use of black and white sets the film as memory, but also emphasizes its rough locations.  Tony Blair is everywhere on background TVs, a constant reminder of the times.  Subtitling, while necessary for those who can’t cut through the thick Glaswegian accents, also does a disservice to some of their more colorful slang, ‘translating’ it to its detriment.  The soundtrack features 30 tracks curated by Glasgow’s DJ Twitch featuring The Prodigy, Orbital, Plastikman and N-Joi.

"Beats" is available at the virtual theaters listed here.