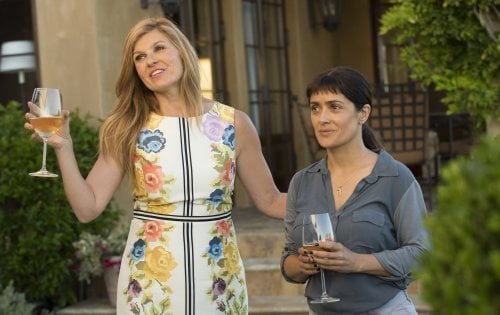 Beatriz (Salma Hayek) is a holistic massage therapist at a local hospital with a sideline of private clients. When she finishes one of the private sessions in an exclusive gated neighborhood with Cathy (Connie Britton), her car won’t start. Cathy invites her stay, beginning a tumultuous time for “Beatriz at Dinner.”

Awakening after a horrible event we won't understand until later, Beatriz (Salma Hayek) feeds her animals and heads to her job as a holistic healer at a cancer center. After another emotionally difficult day, she gets in her old car and fights traffic to Newport Beach to give Kathy (Connie Britton), the mother of a former patient, a pre-dinner party massage. When her car won't start, Kathy invites her to stay, despite her husband Grant's (David Warshofsky, "Now You See Me") reservations, given the importance of their guest. But billionaire real estate developer Doug Strutt (John Lithgow) is unperturbed facing off with "Beatriz at Dinner." Director Miguel Arteta ("Cedar Rapids," HBO's 'Enlightened') and screenwriter Mike White's ("The Good Girl," HBO's 'Enlightened') latest collaboration couldn't be more timely. Although White was inspired by the dentist who shot Cecil the Lion, for all intents and purposes, Doug Strutt may as well be America's 45th president, albeit a more truthful one. Lithgow couldn't be better as the shameless profiteer, environmental disaster and collector of trophy wives, but this is Salma Hayek's movie and the petite actress generates so much power she should be tapped as a new high-efficiency energy resource. Arteta begins with a powerful scene, the bow of a rowboat proceeding up a peaceful river, the silence broken by the bleating of a white goat, stranded in the mangroves on the bank. In a Newport Beach mansion, Beatriz works out Kathy's kinks, her client notices something amiss and Beatriz reveals her sorrow, a complaining neighbor having broken the neck of Geronimo, her spirited white goat (Arteta will cut to the slain animal more than once, a symbolic sacrifice). Kathy, who considers Beatriz a family friend, is horrified. Beatriz, who has rejected Kathy's offer of a clothing change (she tucks in her shirt instead, looking more like a laborer as a result), hovers as the first guests arrive, listening to lawyer Alex (Jay Duplass, "Manson Family Vacation") and his wife Shannon's (Chloë Sevigny) excitement at being included in such a prestigious gathering, one which is sure to upgrade their social and economic standing. Then the great man himself arrives, his elegantly attired wife Jeana (Amy Landecker, "A Serious Man") on his arm and Kathy offers the women a house tour as the men drink on the patio. In Tara's room, a photograph of her with Beatriz is noted, but when Beatriz begins to speak in earnest, we see the women tuning her out, Jeana chortling sotto voce when she mentions her goats. When Beatriz is left standing outside alone with the men, Doug asks her to fetch him a drink. The condescension continues at dinner, Beatriz's earnest talk about her work cut off, but things really explode during after dinner drinks, Beatriz no longer able to hold her tongue as Doug shares his photo of a bagged rhino. The Mexican who speaks with quiet force yet never preaches pitted against the man like so many who displaced her people is the film's most obvious throughline. Doug's rejoinder to Beatriz's concern over our dying earth is chilling, one that could easily be attributed to anyone slashing environmental regulations for corporate interests today. But it is the other members of this party who force us to confront ourselves, people whose ambitions blind them to their own hypocrisies. Alex and Shannon are clearly opportunists, Jeana a Carmela Soprano turning a blind eye to her husband's nefarious business practices while reaping their rewards, finding his confidence a turn-on. Grant is passive, a man building wealth without caring to know just how it is come by, seemingly only annoyed at the treatment of his guest. It is Kathy, the woman who considers herself a good person, who recycles, who embraces Beatriz until she becomes a liability to her privileged lifestyle, who is the most recognizable and Britton plays her to a fault. "Beatriz at Dinner" ends where it begins, on that peaceful river, but the journey there has been unexpected and fraught, Arteta and White somehow melding despondency and spirituality in their closing moments. Grade:

Director Miguel Arteta and writer Mike White team up for the third time – “Chuck & Buck (2000)” and “The Good Girl (2002)” – in a dinner of manners, good and bad, and class conflict. Cathy considers Beatriz her friend because she helped Cathy’s daughter recover from cancer treatment. So, when Beatriz’s car breaks down, she invites her friend to stay for dinner, even though it if for her husband’s wealthy business partners. As the guests arrive and socialize, Beatriz is left out of the conversations until one guest, Doug (John Lithgow), summons her to bring him a fresh drink. An awkward silence hangs for a moment until Beatriz breaks the ice, telling them she is a guest, not a servant. Then, they sit down for dinner. Beatriz realizes that she is now in a rarified stratum of the very wealthy, personified by billionaire, environment-destroying Doug. She holds her tongue, at first, but a few glasses of white wine changes that. She dominates the conversation with her enthusiastic, if not militant, view of life as sacred. Doug tries to change the conversation, boasting about his recent big-game hunt in Africa, including a photo of him and his dead rhino. This is too much for Beatriz. “Beatriz at Dinner” is a variation of the old drawing broom dramas where people of class speak in lofty tones. Mike White’s script is a down and dirty version of this with the societal rift represented by liberal Beatriz, who has hope for the future of man, and alt-right and wealthy Doug, whose attitude is, “The world is dying, so enjoy yourself.” It is the unmovable object against the irresistible force. The characters represent ideas, rather than people, as the inherent class conflict comes to a boil. It is a film about good versus evil, rich man/poor (wo)man and the environment. Salma Hayek is terrific as the champion of good and John Lithgow just needs a mustache to twirl as the representative of the corrupt one-percent. It is obvious which side of the fence the filmmakers are on.