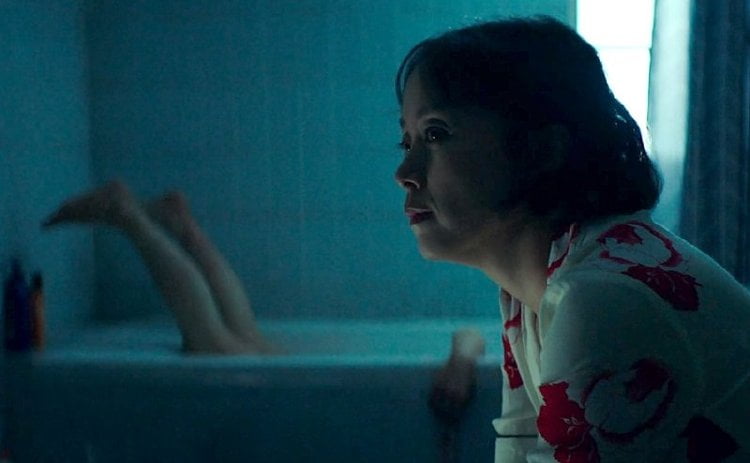 When sauna attendant Jung-Man (Bae Seong-woo), financially dependent on his nagging, incontinent mother (Youn Yuh-Jung), finds a Louis Vuitton bag stuffed with cash, he sees it as a ticket to freedom for him and his put upon wife.  Unfortunately, that bag is being sought by not only its original owner, the local port’s customs officer Tae-Young (Jung Woo-sung), but the man he’s in debt to, Mr. Park, and will also become of interest to the port’s criminal fishing enterprise, Tae-Young’s missing brothel-owning girlfriend Yeon-Hee (Jeon Do-yeon, "Secret Sunshine") and a sexy masseuse, Mi Ran, (Shin Hyun-bin) whose dim-witted blond Chinese client Jin-tae (Jung Ga-rum) wants to save her from her abusive husband.  They’re all “Beasts Clawing at Straws.”

First time feature writer/director Kim Yong-hoon won the Special jury award at the 2020 Rotterdam Film Festival for his blackly comic neo noir.  Adapted from a novel by Keisuke Sone, the film, while hardly original, is reminiscent of the Coen brothers’ films like “Blood Simple” and “Fargo” and has enough surprises and intricate plotting up its sleeve for a darkly amusing evening’s entertainment.

The film is separated into five chapters, the first of which, ‘Debt,’ fleshes out its hard luck cases.  If Jung-Man feels guilty about his wife’s burden dealing with his shrew of a mother, Tae-Young will be introduced to the pier’s crime boss’s goon, a hulking goon who likes to eat raw intestines, the implication being his may soon be on the menu.  The remaining chapters – ‘Sucker,’ ‘Food Chain,’ ‘Shark,’ ‘Lucky Strike’ and ‘Money Bag’ more or less chart the story’s arc, one in which club runners for the fishy mob are named Carp, shark tattoos indicate more than body adornment and a cigarette brand may or may not be well named.  The movie may feature abused women, but it also features a fearless femme fatale and this film’s dumb blond is a Chinese man.  There’s also a bone saw.  And a hungry cop.

Yong-hoon keeps so many plates spinning in the air his pacing will leave you breathless.  Betrayals are thick among these thieves and the rain falls as heavily as an iron skillet on a protagonist’s head.  The innocent are mistaken for men marked for murder, adding complexity to hastily laid plans.  Best of all, the filmmaker knows just who to leave holding his bag.

The cleaning guy at a local sauna finds a bag full of money in a locker. He stashes it away in a storage room and returns home to care for his demanding mother. But, the bag o’ cash is also of great interest to a corrupt port officer, a hostess in a men’s club and a notorious mob boss in “Beasts Clawing at Straws.”

First time writer-director Kim Yong-Hoon gives us a wacky, machine gun-paced crime thriller comedy that kept me amused from beginning to end. It is a kitchen sink kind of caper comedy that has the bag o’ money as the object of desire and that maguffin keeps our attention focused.

There are a bunch of players vying for the treasured bag and it could have been just a ball of confusion. But, the individual personalities and positions of the players are all kept distinct so all have a degree of dimension. This gangster-comedy-thriller-adventure flick combines the rapid pace and editing with a clever, appealing story that make this a whole lot of fun.

There is an assured feel to this debut by filmmaker Kim and shows he has a deft hand at both action and comedy. I look forward to his next.