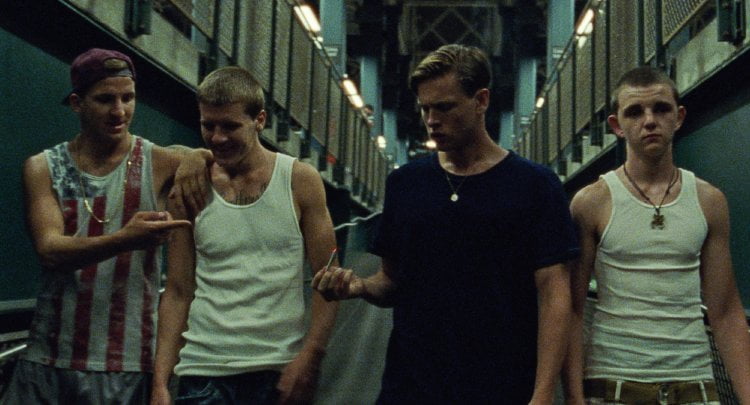 Nineteen year-old Frankie's (Harris Dickinson) behavior has his mother Donna (Kate Hodge) concerned. While his father is dying of cancer under hospice care in the family's living room, Frankie spends a lot of time in the basement drawn to the male, often nude, profiles on the Brooklyn Boys chat site. He spends his days playing handball and hanging at local beaches, his nights at Coney Island and on booze cruises. Frankie's first dates with Simone (newcomer Madeline Weinstein) have been awkward and he's hiding the fact that he's been hooking up with older men from his "Beach Rats."

Writer/director Eliza Hittman ("It Felt Like Love") is the real deal. This sensitive portrayal of a young man struggling with his sexual identity while his father is slipping away is beautifully filmed (16mm cinematography by "Pina's" Hélène Louvart) and acted by her (mostly) inexperienced cast. Young British actor Harris Dickinson is completely convincing as a Coney Island beach rat, albeit a more gentlemanly one than the buddies his mom calls degenerates. If Hittman's trippy combination of visuals and sound don't pull you in, Dickinson surely will. Frankie frustrates the first older guy he meets online with his inability to state what he likes or even utter the word 'dick.' That night, out with Alexei (David Ivanov), Richie (Anton Selyaninov) and Nick (Frank Hakaj) watching summer fireworks, a woman's shapely posterior catches his eye. Simone asks him what he thinks of the display she obviously finds romantic. Frankie returns macho disdain for an event that is 'the same every week,' but Simone's intrigued. When they return to Frankie's basement, though, he cannot perform, hiding his embarrassment by mocking her. A moving and heartfelt apology at the beach enables the budding relationship to continue. But Frankie's gotten bolder on the Brooklyn Boys site, meeting a series of men after hours at the beach. One (Douglas Everett Davis) decides to take him to a motel and Hittman infuses the scene with dread, only to reveal the two warmly relaxed in banter after sex. But when Frankie takes Simone on a booze cruise along with his rats, that man turns out to be one of the ship's bartenders and he alarms Frankie with a series of rounds 'on the house.' Frankie's drunken behavior alarms Simone. Hittman visualizes Frankie's crew as macho posers with homoerotic undertones, the lads frequently shirtless. Frankie's first attempt to get Simone to talk about 'turn ons' doesn't get the desired response ('Two girls can make out and it's hot. Two guys make out, it's just gay.'). He eventually tells the guys about Brooklyn Boys, telling them he uses the site to score weed. They find a guy, Jeremy (Harrison Sheehan), who wants to smoke and is willing to drive across town. Frankie's outside world is a dazzle of lights and music (the fireworks theme is repeated throughout), his home life one of hiding. Hittman uses great economy depicting the death of Frankie's father, a waning monitor beep segueing into a funeral procession. Frankie's confusion is signalled by his interest in a run in his mom's black stocking. He later watches his Brooklyn Boys from behind fanned fingers. Hittman's earlier false flag of sinister intentions foreshadows her film's climax, an attempt by Frankie to denounce his secret lifestyle. Hittman is an expressive actor, his sensitive performance conveying a good heart lost in inner turmoil. Hodge balances exasperation with a mother's genuine concern for her clearly troubled boy. As Frankie's little sister Carla, Nicole Flyus is hilarious standing her ground. Weinstein combines the allure of her beauty with a recognizable, protective teenaged self interest. Everett Davis and Sheehan both convey fully realized characters with scant screen time. But the titular beach rats are almost interchangeable, only Anton Selyaninov's Richie standing out because of his unusual looks and potential shared secret. "Beach Rats" has a somewhat open ended finale, but Hittman's talent in bringing her story to the screen leaves us feeling everything's going to be all right. Grade: