Be My Cat: A Film for Anne 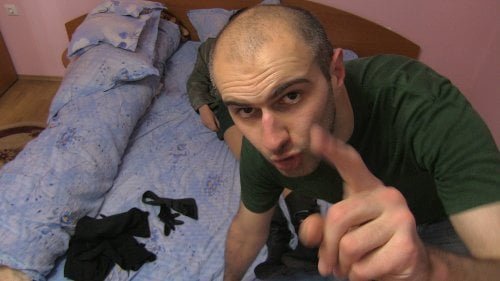 Adrian (producer/star/cinematographer/editor/writer/director Adrian Tofei) is a disturbed young filmmaker who has never set foot outside of his hometown of Radauti in Romania. Yet he is convinced he has a vision that will make cinematic history if only he can convince Anne Hathaway to star in his film. He hires three actresses under false pretenses to make 'the ultimate sacrifice' so he can pitch "Be My Cat: A Film for Anne."

This Romanian found-footage film may hold few surprises and drags through much of its run time, but it's worth checking out for the filmmaker's seriously deranged performance. Tofei's manic, gushing enthusiasm, punctuated with high registered giggles, is so authentic, one wonders just how endangered his cast really may have been. The filmmaker also adeptly handles the found footage format, never cheating to tell his story. If only he hadn't indulged himself so much with overlong takes and too much repetition. The film opens with the usual found footage verbiage. We are about to see an edit of twenty-five hours of footage found by the police at the Radauti crime scene on May 20, 2014. The filmmaker's face then fills his frame as he addresses Hathaway directly, telling her how he despaired of ever finding the correct actress until he saw her in her cat costume in "Dark Knight Rises." Gradually we learn Adrian was bullied in school and dislikes dogs and boys because both are mean, whereas he likes cats and girls who 'are so sweet and cute.' He also confesses he 'accidentally' killed a cat that he loved, a big red flag (as if we needed another one!) Adrian's first actress, Sonya (Sonia Teodoriu), arrives and is given much direction, told to keep one full meter from Adrian, but not to run. When he continually runs after her and tags her for allowing him to get too close, she becomes frustrated. He insists she must find the solution. Worn down, Sonya calls the police, no longer wishing to be in this madman's film, but she already is, he informs her. When Flory (Florentina Hariton) arrives, Adrian immediately has problems with the weight she's gained since the headshots she'd sent him. She's obviously fashioned herself as an Anne Hathaway clone, but Adrian's dissatisfied, telling 'Anne' that he will 'figure out what to do with her.' By the time he gushes to Anne that with his film 'millions of people will free their egos from their souls and the world will be a better place' and that he doesn't need his third actress as he's ready for her, Alexandra (Alexandra Stroe) must use her wits to placate his delusions. The three actresses create very different people. Teodoriu strikes as an inexperienced actress looking to build her resume who quickly becomes alarmed with her working conditions but is too meek to make a strong stand. She barely registers, but that is fitting for the character. Hariton fashions a cocky rebel, amused by Adrian's grandiosity. Stroe is the strongest by dint of her material which lifts the film's remaining act from its dragging pace. The entire production takes place in one house and the street it stands on, Tofei moving the action around from the street to an alley to his room, the kitchen (where we get a glimpse of his mother at the stove) and the basement, where other residents are drawn by screams but turned away with assurances of filmmaking. Although the film's poster suggests an extremely gory movie, Tofei hides most of this with a white sheet to 'protect' Anne's sensibilities (bloodletting taking place behind it is clearly liquid being thrown by the filmmaker, one of the only lapses in his barebones production). "Be My Cat: A Film for Anne" suggests "Angst" by way of "My Date with Drew." The 87 minute film would have been much improved if there were at least 10 minutes less of it, but Tofei's first effort is a portrait of genuine madness. Grade: