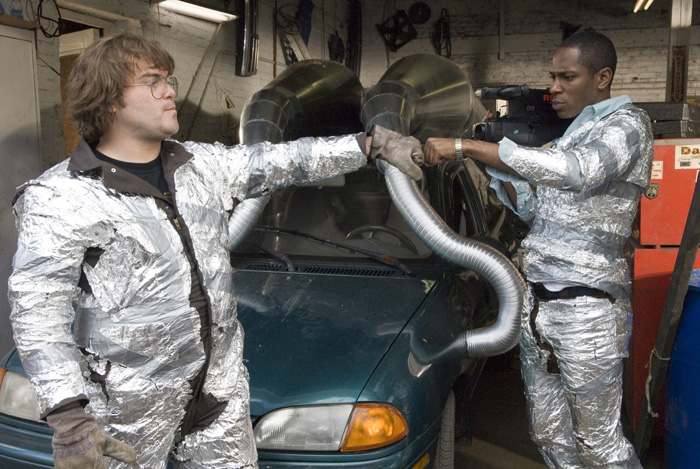 Mr. Fletcher (Danny Glover, "Lethal Weapon 4," "Honeydripper") is in a losing battle with the zoning board of Passaic, New Jersey, who wish to condemn his run down video store for new development, but Fletcher claims his site as the historic home of jazz legend Fats Waller. When he takes a trip in a last ditch effort to save his business, he leaves his clerk, Mike (Mos Def, "16 Blocks") in charge with a strong warning to keep local nutjob Jerry (Jack Black, "Nacho Libre," "Margot at the Wedding") out of the building, but Jerry not only runs in with customers, he becomes magnetized in a power plant accident and wipes out the entire stock which he then proposes they remake themselves in "Be Kind Rewind."

Writer/director Michel Gondry ("Eternal Sunshine of the Spotless Mind," "The Science of Sleep") has proven himself visually imaginative, but when he works from his own scripts the films seem half-baked. "The Science of Sleep" got by on the charms of its stars and a pantomime horse, but once we've seen Mike and Jerry tackle "Ghostbusters," the film delivers diminishing returns. "Be Kind Rewind" has a fatal flaw in expecting today's audience to believe there is any kind of livelihood in renting video tapes for a dollar. Essentially we have a plot that has Mr. Fletcher becoming enlightened about the potential of dvd after having stubbornly refused to consider them, hardly a story to get excited about. The whole movie rests of the comedy that can be milked watching Black, unchecked in high meter manic mode, and Mos Def, the polar opposite, make twenty minute versions of "Rush Hour 2," "The Lion King," "Robocop" or whatever else their clientele requests, then believing that these fakes, which inexplicably become known as 'swedes,' become immensely popular - and not for their kitsch appeal. A visit from studio exec Ms. Lawson (Sigourney Weaver, "Vantage Point") threatening copyright infringement is a half-hearted attempt at relevance and the celebrity psychology of Be Kind Rewind's customers becoming part of their own requests (Mia Farrow's Miss Falewicz dreams of being Miss Daisy) is left unexplored. There are a few giggles to be had in the silliness of home made special effects and the concept of remaking Mohammed Ali doc "When We Were Kings," but "Be Kind Rewind" quickly devolves into quirky boredom.