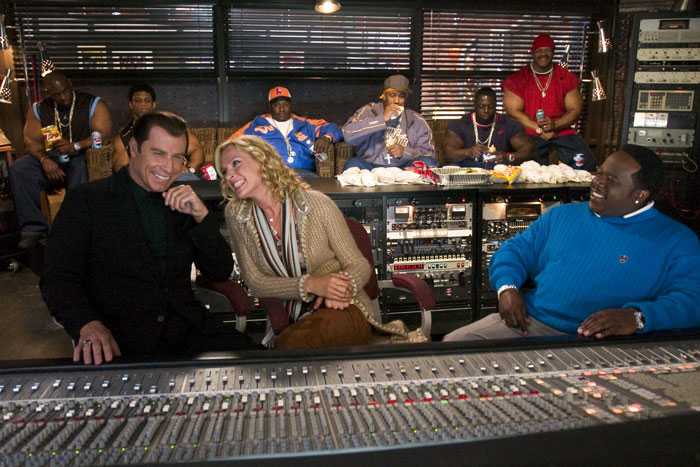 Record label owner Tommy Athens (James Woods, "Northfork") is pitching himself as the subject of a movie to his old friend Chili Palmer (John Travolta, "Get Shorty") when he's hit by the Russian mob. Chili pays a visit to Tommy's widow Edie (Travolta's "Pulp Fiction" costar, Uma Thurman) and decides he wants to get into the music business, so he riles Raji (Vince Vaughn, "Dodgeball: A True Underdog Story") by stealing his under contract talent, Linda Moon (Christina Milian, "Torque"). Now Chili's in the cross hairs of the mob, Raji's boss, Nick Carr (Harvey Keitel, "National Treasure"), and Sin LaSalle (Cedric the Entertainer, "Barbershop 2"), who's looking for repayment of Tommy's $300 grand debt, in the sequel to Elmore Leonard's "Get Shorty," "Be Cool."

Chili Palmer (John Travolta) is totally disenchanted with the Hollywood filmmaking machine that he took on ten years ago. When his friend, music producer Tommy Atkins (James Woods), is rubbed out by the Russian Mafia because of a $300k debt, Chili takes up with his widow, Edie (Uma Thurman), who took over her dead hubby’s record production company. Chili is about to find that the music business is even more cutthroat than the movies in “Be Cool.” In the sequel moviemaker mind, if you take everything that made an original film a success and rehash, replicate and regurgitate it, then you’ll create something as good, or at least as familiar, as the source work. This seems to be the philosophy of F. Gary Gray and company in their adaptation of Elmore Leonard’s own sequel to “Get Shorty” as Chili Palmer tries to do for music what he did for movies. As is most often the case, the sequel to the fast paced wit and charm of the original is a mere, pale ghost and that is more than true with “Be Cool.” Leonard’s novel may have been written with Travolta in mind but screenwriter Peter Steinfeld (“Analyze That”) has sucked whatever life there may have been in the author’s music business satire. Stilted dialog that lacks any of “Get Shorty’s” sparkle hampers things considerably – I grew very tired very fast with Chili’s constant admonishments to various thugs and ne’er-do-wells to “look at me.” The power of that command worked well in the earlier Palmer film but is just plain annoying here. Just as Barry Sonnenfeld had in the original, the cast of “Be Cool” is a Hollywood and music biz who’s who of talent – Travolta, Thurman, Danny DeVito (briefly), Harvey Keitel, James Woods, Cedric the Entertainer, Vince Vaughn, Dwayne “The Rock” Johnson, a slew of rapper personalities (including Andre 3000 (AKA Andre Benjamin) as Cedric’s goofy brother-in-law lieutenant Dabu), rock’n’roll personalities Steve Tyler and Joe Perry, music legend Sergio Mendez and more populate the scenery of “Be Cool,” but they are little more than scenery. John Travolta, in “Get Shorty,” owned the role of Chili Palmer. He made the shylock into a real living and breathing character that you loved to like because of his cool, unflappable demeanor and business savvy. Now, 10 years later, he still looks the part of the ultra-cool Chili, all dressed in black and still unflappable, but there is none of that suave savvy in Be Cool.” Here, he is pretty much just unflappable, whether taking a stand for his new “client,” Linda Moon (Christina Milian), saving Edie’s record company or facing down rival producer Sin LaSalle’s (Cedric) gun totin’ gang. Travolta fails to infuse any emotion into his Chili, making the character more cold than cool. The rest of the cast goes through the motions but are left high and dry by the screenplay. Uma Thurman is nice” as Edie but does not provide any of the kill-or-be-killed nature necessary to her record exec. Edie calls the business “dog eat dog” but does nothing to show this side of things as they apply to her. She is perky and a little innocent and has fun dancing with Travolta in the film’s “homage” to “Pulp Fiction.” Vince Vaughn, as the white guy rapper wannabe Raji, does the jive talk amusingly, at first, but his rapid patter grows stale after a short while. Of all of the supporting players, The Rock fares best as Raji’s gay bodyguard, Elliot Wilhelm, who wants to be an actor. The pro wrestling icon turned actor uses his patented cocked eyebrow to amusing effect. My only problem with Dwayne’s performance is there wasn’t enough of it. Andre 3000 steals his part of the show when he is on screen. There is little or no chemistry in the acting due to the routine direction by F. Gary Gray (“The Italian Job”) who, in turn, is done in by screenwriter Steinfeld. Of note: Steve Tyler gives what has to be one of the worst performances I have ever seen as a celebrity playing himself. The very subject matter of “Be Cool” versus “Get Shorty” – music instead of movies – precludes a change in pacing that is problematic. Where “Get Shorty” had the luxury to toss off film references on a whim, “Be Cool” is severely hampered by the required full-length music numbers – four songs, a music video and a montage sequence, if I remember correctly – that disrupt the action and screw up the pacing, making the not-that-long film seem bloated and ponderous. The reuniting of Travolta and Thurman is nice but why duplicate their “Pulp Fiction” dance? It’s blatant derivativeness only calls attention to itself without any freshness. What’s the point? “Be Cool” should follow its own advice and doesn’t.