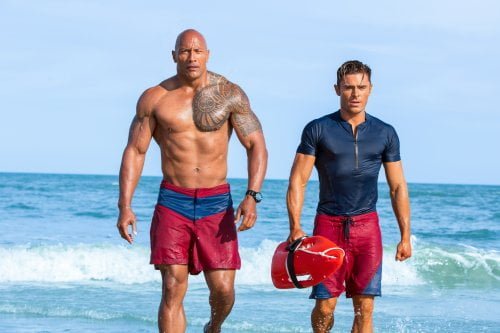 Life saver Mitch Buchannon (Dwayne Johnson) is treated like a demi-god around the beach he protects, much to the annoyance of Sgt. Ellerbee (Yahya Abdul-Mateen II), who's constantly rebuking him for overstepping his bounds. But Mitch has a bigger problem when disgraced Olympic gold medal winner Matt Brody (Zac Efron) shows up for tryouts expecting to be rubber stamped onto the team of "Baywatch."

When "21 Jump Street" arrived, it wasn't the first movie parodying the TV show it adapted, but it mostly got it right, subverting the conventions of the series. Director Seth Gordon ("Horrible Bosses," "Identity Thief"), working with a screenplay by "Freddy vs. Jason's" Damian Shannon & Mark Swift, aims for the same kind of humor. It works for a while, largely due to the comedic talents of its stars and two early rescue set pieces, but as usually happens with these types of films, the superficial plot ends up overtaking the comedy. Even the credit roll bloopers have no laughs. A prologue charts Mitch's incredible awareness when a wind gust draws his attention to a wind surfer in peril. After bringing the unconscious young man back to the beach, he's surrounded by admirers. Walking away, he gives tips to the man who creates a daily sand castle idol in his honor ('Don't cover up my front bump') before noting something disturbing, a small cellophane bag of flakka washing up in the surf. Back on the beach, doughie Ronnie (Jon Bass, "Loving") is struck dumb when addressed by CJ Parker (model Kelly Rohrbach), who encourages him in his tryout attempt. Another hopeful, Summer Quinn (Alexandra Daddario, "San Andreas"), throws some serious shade at Brody. When Mitch objects to the Olympic swimmer who won two medals on his own but choked during the relay race that dubbed him the 'Vomit Comet,' he's stunned to learn his boss Captain Thorpe (Rob Huebel, "The Descendants") arranged the deal for publicity. With three new team members, a frantic call is received about a boat on fire. Mitch dives beneath the flames, rescuing three young woman, but the man he finds, Councilman Rodriguez (Oscar Nuñez, TV's 'The Office') is already dead. Having noted the flakka packet in one woman's bikini bottom, Mitch begins to connect the dots between Rodriguez and the woman who's attempting to take over the Bay, Victoria Leeds (Priyanka Chopra, TV's 'Quantico'). Most of the humor is derived from Mitch's Brody put downs ('One Direction,' 'Beiber' and 'H.S. musical'), dick and boob jokes, morgue and crime scene gross-outs and tweaking the series (everyone sees CJ in slo-mo, the lifeguards fighting serious crime). The most inventive recurring bit involves the ever-changing Mitch figurine in his home aquarium that dogs Brody. Brody's story adds a redemptive, coming-of-age strand to the mix. Everyone in Baywatch is paired off, Mitch's relationship to his right-hand Stephanie (Ilfenesh Hadera, "Chi-Raq") the most ambiguous. The cast is solid, the biggest surprise being Bass's schlumpy underdog with Rohrbach's sunny capability a sweet romantic foil. Cameos are another matter entirely, Hasselhoff's only contribution the recognition factor, Pamela Anderson's walk-on so ineptly edited one wonders how bad her footage was to begin with. But while those first two rescues are done well enough to get the adrenaline going, as the film progresses some shoddy CGI and green screen work, perhaps meant ironically, cheapen the production. Grade: