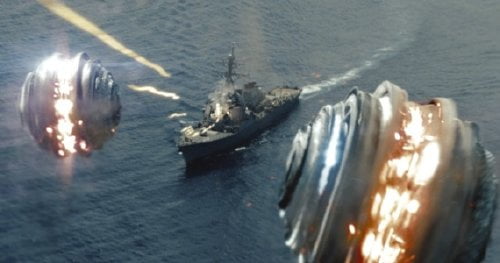 Commander Stone Hopper (Alexander Skarsgård, HBO's 'True Blood') is frustrated by his younger brother Alex's (Taylor Kitsch, "John Carter") utter lack of ambition and horrified when Alex gets arrested trying to impress a girl on his birthday. That's because the girl, Sam (Brooklyn Decker, "Just Go with It"), happens to be the daughter of his commanding officer, Admiral Shane (Liam Neeson). Alex follows Stone into the Navy and is about to get thrown out when he suddenly finds himself the highest ranking officer of the Destroyer John Paul Jones during an alien attack centered on their Oahu base in "Battleship."

The "Whiteout" and "RED" screenwriting team of Erich & Jon Hoeber take on the Hasbro game and, along with "Friday Night Lights" director Peter Berg churn out something dumber than a box of rocks. These filmmakers have paid no attention to physics, logic, consistency or real people. They barely fit in a reference to the titular board game. And if you wonder why opening title cards inform us that the events unfolding are taking place in 2006, it's because, in a rare case of thoughtfulness, somebody probably realized that the climactic use of WWII veterans would be really pushing things age-wise in the present day. Immediately after being tazed while drunk, we find Alex engaged in a naval soccer game where a nasty run in with Captain Yugi Nagata (Tadanobu Asano, "Ichi the Killer," "Thor") results in harsh words and injuries. Lieutenant Hopper's pigheadedness costs the U.S. team the game. He's noticeably late for the Admiral's kickoff of Rimpac exercises, then engages in fisticuffs in the head with Nagata and is called on the carpet. Not the best time to ask dad for his daughter's hand, which was Sam's original goal for him that morning. Once at sea, however, all hell breaks loose. At Oahu's international satellite center, Cal Zapata (Hamish Linklater, TV's 'The New Adventures of Old Christine') is unnerved when people like the Secretary of Defense (Peter MacNicol, "Sophie's Choice," TV's 'Ally McBeal') start looking to him for answers about the five objects hurtling their way towards him from outer space. Cal's a scientist engaged in trying to communicate with Planet G, a very distant world with properties similar to earth. One of these masses breaks up entering our atmosphere, devastating parts of Hong Kong (with imagery obviously alluding to 9/11), but the others land in the Pacific, mere miles from the Navy exercises. Stone orders a team out to investigate, so his bro hops on an armed inflatable along with Petty Officer Cora 'Weps' Raikes (singer Rihanna) and Chief Petty Officer Walter 'The Beast' Lynch (John Tui). When Alex hops onto the surface of the massive mystery, a domed shield is lowered over the 50th state, massive alien ships surface from below and communication signals are toast. And despite the massive amount of water displacement going on at close range, that inflatable barely bobbles in the water. Meanwhile, back at home, Sam (Brooklyn Decker, "Just Go with It") has taken over as physical therapist for Lieutenant Colonel Mick Canales (Gregory D. Gadson), a man who's lost is legs and his will. She bullies him into a hike that gifts them with a great view of alien invaders and has them cross paths with Cal, whose satellite station is now ground zero for the attackers who've lost their own communication ship. It will be no surprise that Alex ends up going from loser to hero, joining forces with Nagata when the Japanese crew is rescued by the John Paul Jones (Nagata's the one who 'plays the game,' forming a grid on a computer screen to 'find' alien ship view tsunami buoys that they can conveniently receives signals from when nothing else gets through). Mick finds his mojo taking on aliens in hand to hand combat on his artificial legs and Cal finds a way to get through to Alex's ship so he can talk to his girlfriend. (It's a challenge to pick the dumbest incident in this film.) Universal has asked reviewing press not to disclose certain details, so just let it be said that after Alex stuns with a move that might work with a rubber ducky in a bathtub but seems, ahem, unlikely with a destroyer, he must captain the type of boat he'd somewhat dissed earlier - a battleship. Pearl Harbor is actually referenced early on, when a kid's baseball game (!) is one of three targets of attacking aliens (the others being a freeway overpass and the Navy fleet). In fact, it is a mystery why Michael Bay isn't at the helm of this one, with its alien weapons like oversized yoyos with teeth ripping through metal (the big ships fire cannisters that explode, rather mundane for alien weaponry, except that when they land, they embed into surfaces like pegs on a Battleship board). Acting ranges from abysmal to routine, with 'Friday Night Lights' Jesse Plemons as Boatswain Mate Seaman Ord putting some personality past the director. Otherwise, the only reason Alex and Sam are a couple is because they're both pretty and the only reason Neeson's an admiral is for a paycheck. Skarsgård, looking somewhat plucked in a military cut, has the good luck to check out early. Rihanna slaps on a serviceable grimace, but Linklater's just awful. The effects are OK for this sort of thing, but there is nothing one hasn't seen before or better. At least it's not in 3D. As is usual with dumb movies, this one's loud with headbanging music from AC/DC and ZZ Top that's at least better than the two note droning score (from Steve Jablonsky who, surprise!, scored all three "Transformers" movies). Besides the script's plotting idiocy it also sports hamfisted dialogue but fails to include the line everyone seems to want to hear. For a two plus hour film, the movie concludes suddenly, as if one battle victory just won an entire war and we're back in an Oahu as pristine as the one we started with. With "Battleship," Berg's beating on the drums of post 9/11 patriotism, but he's far more entertaining in this Israeli press junket video showing his true crazy colors berating an Israeli journalist as a draft dodger.