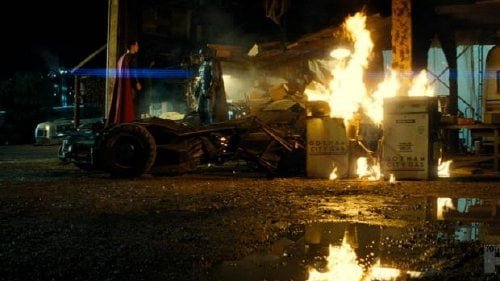 After Superman's (Henry Cavill) battle with General Zod (Michael Shannon) just about destroyed Metropolis, including a Wayne Industries building with hundreds of employees trapped inside, Batman (Ben Affleck) views the Man of Steel as an enemy of humanity in "Batman v Superman: Dawn of Justice."

After a prologue featuring the upmteenth rendition of the murder of Bruce Wayne's parents laden with a falling motif, director Zack Snyder ("Watchmen") gets to the business of addressing critics of his last film, "Man of Steel," who noted the excessive destruction of its climax (among other things). The now adult (and older than we've seen him before) Bruce Wayne is racing towards the climax of that film, intent on saving lives. It's the on-the-ground perspective the former film was missing and it's a great kickoff (Wayne saves one of his security guards, Wallace Keefe (Scoot McNairy, "Argo"), but not the man's legs, as well as a little girl who's just lost her mother, amidst the mayhem and tumbling buildings). Wayne looks to the sky, where we get a brief glimpse of Superman tackling Zod, and he's pissed. While he's not the only one unsettled by Superman, 18 months later the alien has had a statue erected to him while the Batman is still tagged a vigilante criminal. The cops find his brand on human trafficker Anatoli Knyazev (Callan Mulvey, "Kill Me Three Times"), the man Wayne hopes will lead him to the White Portuguese and the Kryptonite recently found on the bottom of the Indian Ocean. Meanwhile, Superman takes his lumps after rescuing Lois Lane (Amy Adams) from an African terrorist interview infiltrated by the C.I.A. He's accused of having killed several villagers and Senator Finch (Holly Hunter) is on the case. But there's someone else in Metropolis looking to get the Kryptonite, LexCorp CEO Alexander Luthor (Jesse Eisenberg), and it soon becomes evident he's a puppet master using the Super Heroes' antagonism toward each other towards his own ends. (There's an amusing scene at a Luther bash where Kent meets Wayne and where the mysterious Diana Prince (Gal Gadot, "Furious 7") catches Wayne's eye.) Writers Chris Terrio ("Argo") and David S. Goyer ("Man of Steel") have worked overtime stuffing their screenplay with political, religious and mythic allegories. There are fathers and sons, angels and demons, god and man, mythic swords and mothers named Martha. Superman is referred to as an 'alien' throughout, someone whose otherness is cause for fear (notably the real terrorist is home grown). But the long debated battle, when it finally comes, is a bit underwhelming (Kryptonite's effect seems to last as long as editor David Brenner needs to turn the tables) and the enemies become allies so abruptly you may think you've missed something. The big climax is a CGI sludgefest featuring a giant Zod monster and yet another super hero flying into the sky with a nuclear weapon along with the initiation of the Justice League in the form of Wonder Woman (Aquaman (Jason Mamoa) and The Flash (Ezra Miller) are briefly glimpsed in one of Wayne's many nightmares/visions). Affleck's Batman is very much modeled on Nolan's, a dark knight who rarely lightens, and he's brought age, heaviness (he's bulked up, his suit like a tank) and bitterness to the role. Taking over for Michael Caine, Jeremy Irons is an efficient right hand Alfred fretting over Bruce's aging bachelorhood. Eisenberg gives us a youthful, snarky sociopath and he's the most fun element of the film, clad in an anarchical tee shirt of a chimp with a detonator. Hunter, who goes head to head with him, is gives moral weight and integrity to her unflappable Senator. But with the exception of Laurence Fishburne, whose Perry White delights in snapping out zingy headlines, the returning cast doesn't fare as well. Cavill's Superman is undergoing a crisis of public perception and the actor plays it like a shy, rejected suitor (he's more alive making love to Lois). Adams is earnest. Kevin Costner makes a surprise and welcome appearance during Clark's self-imposed exile. "Batman v Superman: Dawn of Justice" has some standout scenes (a Superman Congressional hearing, any featuring Luthor), but its climax short circuits and too many of its themes are squandered. Grade: