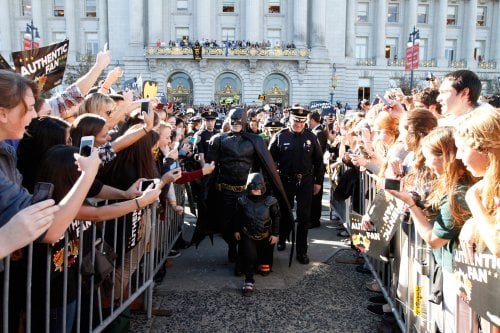 Everyone knows and loves the Make-a-Wish Foundation and its good works granting wishes to kids with life-threatening illnesses. These wishes are usually small scale affairs but that changed with a little boy, Miles Scott, who really wants to be the sidekick of his favorite superhero as “Batkid.”

When their first son Miles was only a year and a half old, Nick and Natalie Scott noticed an odd lump on his neck. They never expected the diagnosis they received - leukemia. For the next two and a half years, Miles underwent a grueling treatment schedule. That's when his dad tried to distract his super hero loving son by introducing him to the Adam West 'Batman' television series. When the Scotts contacted Make-A-Wish, an interviewer determined that Miles's biggest dream was to become Batman. Then the foundation's Bay Area CEO Patricia Wilson got handed the job and before she was done Miles's dream was celebrated around the world in "Batkid Begins." Cowriter (with Kurt Kuenne)/director Dana Nachman ("The Human Experiment") wasn't even aware of the Batkid phenomenon that occurred on November 15, 2013, but she heard about it the next day from the friend who would go on to produce her documentary. Working with the footage that was shot by five different cameras that day, Nachman has structured her film to illustrate how coming together for a cause can be at least as, if not more beneficial for the adults who helped make a small boy's dream come true than for the kid himself. While the film has its share of flaws (flat comic book animation that lacks pixelation, repetition that pads the film's running time), it's not only joyful, but thought provoking. I walked out of the screening thinking what a strange species the human race is, one that can be capable of horrible cruelties, yet can also come together for a compassionate cause. Initially, Make-a-Wish proposed staging the event in the Scotts' sleepy home town of Tule Lake, but Natalie wisely suggested the family could use a change of scenery and San Francisco, aka Gotham, beckoned. The first and most central player Wilson called in was former stuntman Eric 'EJ' Johnston, who would not only be Batman to Miles's Batkid, but would gradually introduce the shy Miles onto a public stage. With the help of social media (Apple and Twitter, among others, contributed time and talent), soon the Mayor of San Francisco, Ed Lee, Chief of Police Greg Suhr (who should be cast in every Batman movie going forward) and even the San Francisco Opera's costuming department were involved in creating three scenarios for Batkid, in a borrowed Lamborghini Batmobile, to save the city. Wilson and her team began expecting hundreds on one city street (they only requested two police motorcycle escorts) and ended up mounting something akin to a Hollywood movie production with 25,000 extras, many of whom flew in for the event. "Dark Knight" trilogy composer Hans Zimmer scored a theme exclusively for Miles, various Batman actors tweeted their encouragement and President Obama sent an enthusiastic video message. As we watch Miles (in a suit donated by another child) save a damsel in distress, defuse a bomb, lock up the Riddler and chase down the Penguin, we can see the child tire (his parents waited until his treatments were over so he'd have more stamina to enjoy his day). During the lunch break, it looks like Miles might be done, and we wonder how much the adults pushed the show to go on with crowds still waiting at the Giants AT&T Park and City Hall (EJ is shown rallying the boy, pointing out the Penguin (Lucasfilm animation software engineer Mike Jutan) with Giants mascot Lou Seal as his hostage). But at the end of the day, accepting the key to the city from the Mayor, Miles is beaming. There was controversy afterwards, many asking if the city's $105K expenditure was warranted. It's a valid question, although the morale boost and good will given to San Francisco that day was clearly of great value (the question was also made moot by a charitable couple who picked up the tab). If you are afraid that all this loving outpour will end in tears, don't be - we leave Miles in remission, happily playing with his little brother. Grade:

Miles was diagnosed with leukemia at 18 months old and underwent chemo therapy for three years. During that period he became obsessed with superheroes, especially Batman. When the Make-a-Wish foundation contacted the boy’s family to find out what Miles wanted for his wish, his immediate reply was “Batkid.” This simple request, when social media became involved, went viral worldwide with thousands volunteering to help make a boy’s dream come true. This is the kind stuff that you cannot make up. Not just thousands of volunteers came on board to make Miles’s wish a reality. San Francisco city officials - including police chief Greg Suhr who broadcasts the pleas for help from Batman (Eric “EJ” Johnston) and Batkid - businesses such as Apple and Twitter, the San Francisco Chronicle and support from across the country and the world and turned their town into Gotham City for a day – the Chronicle even put out an edition of the Gotham City Chronicle to celebrate the event. Filmmaker Dana Nachman crafts a solid documentary about a wish come true. The outpouring of affection from the public for a little boy named Miles is jaw dropping. For example, the plan of the day called for a two police motorcycle escort – in fact, dozens of policemen volunteer to escort for free, on their own time. The affection toward Miles by the thousands attending his special day is palpable. It is things like this that make “Batkid Begins” an uplifting and feel good documentary if there ever was one.