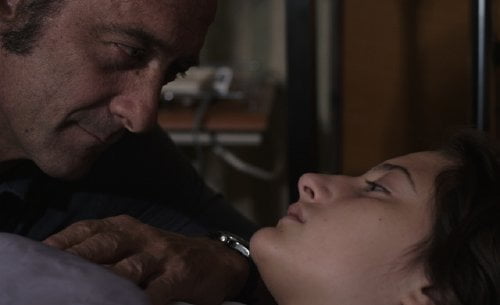 Ship’s captain Marco Silvestri (Vincent Lindon) abruptly leaves his command when he learns of his brother-in-law, Jacques’s (Laurent Grevill), suicide. He rushes to his sister, Sandra’s (Julie Bataille), side and finds things are far darker than he could possibly expect in “Bastards.”

Yellow tape marks off an accident scene on a dark street. A young woman walks nude but for a pair of heels in the pouring rain. These two incidents are linked and Naval Captain Marco Silvestri (Vincent Lindon, "La Moustache," "Mademoiselle Chambon") gives up his post to return to Paris and to help his distraught widowed sister Sandra (Julie Bataille, "Paris, je t'aime") and his abused niece Justine (Lola Créton, "Bluebeard," "Something in the Air"). He will be shocked to realize they are complicit with "Bastards." Cowriter (with Jean-Pol Fargeau)/director Claire Denis ("Beau Travail," "35 Shots of Rum") takes a fragmented approach to an investigation which leads to incest and a horrific sex ring, but although her production is handsomely shot by long time cinematographer Agnès Godard and artfully scored by Tinderbox's Stuart Staples ("White Material") her story shards are so refracted there is no emotional stake to grasp onto. "Bastards" is intriguing to a point, but when Denis's sordid glimpses at a vile underworld come to a climax we realize she's forgotten to give us anyone to care about. After Marco's fellow Naval colleague and brother-in-law Jacques (Laurent Grévill, "I've Loved You So Long") commits suicide, he heroically does everything in his power to step in for the missing man in his family. A consult with Justine's psychologist, Dr. Béthanie (Alex Descas, "35 Shots of Rum"), is disturbing, but the young girl insists she loves 'him.' Marco takes an apartment below a beautiful woman with a young son, the father of whom, super wealthy businessman super wealthy businessman Edouard Laporte (Michel Subor, "Beau Travail," "White Material"), Sandra pinpoints as the root of their tragedy. He quickly falls into an affair with Raphaëlle (Chiara Mastroianni, "A Christmas Tale," "Beloved"), and she is punished by Laporte by his kidnapping of their child.. Sandra is faced with bankruptcy at the hands of this man, her husband's former business partner. Neither has recourse and the more Marco tries to help, the deeper he's drawn into the quicksand of the evil that men do, as helpless as those he's tried to protect. Lindon, who starred in Denis's "Vendredi Soir," is audience stand in as flawed white knight, and Godard's ample use of closeups allow us to see his compassion, frustration and eventual disgust. But the three major actresses in the film never earn our concern because we have no history and Denis's screenplay hints motivations were at least partially self serving. Créton makes for a stunning victim, but despite the horrors we see inflicted upon her, we have no idea how she got there. The film also stars "Trouble Every Day's" Florence Loiret Caille and "Beau Travail's" Grégoire Colin as hedonistic coconspirators.

You can love films by Claire Denis – “Beau Travail” – or hate them – “Trouble Every Day” – or you can feel somewhere in the middle. This is where I place “Bastards,” a multiple character study of a man, Marco, and the women around him. Jacques’s suicide is that catalyst that triggers his entry into a bizarre, seamy world of ambiguity. Denis uses a multi POV approach in telling the story, co-written with Jean-Pol Fargeau, where that view may be real, a hallucination or a dream. Things are never what they seem which, with the darkly hued production design, adds to the film’s ambiguity. The non-linear editing and sometimes confusing turns of events had me wondering what the heck is going on, or did I miss something? Admittedly, Claire Denis is a formidable filmmaker and “Bastards” works best because of its star, Vincent Landon. There is chemistry between the director and the actor which first came to light in the one-night stand romance, “Friday Night (2002).” That pairing of helmer and thespian worked so well, it was predestined that they work together again and the result is worth the watch. I have always liked Vincent Lindon, with his craggy, handsome face and soulful eyes. He is the best thing about “Bastards.” Because of the film’s dark look and similarity in visages of the women opposite Marco contributes to my confusion on who is doing what to whom. The is a sinister element with wealthy mystery man, Edouard Laporte (Michel Subor), Marco’s sister, Sandra, the mystery man’s mistress, Raphaelle (Chiara Mastroinni) and her son – and an ear of corn(?). The overall effect is one of vague distaste. This is a must for Claire Denis fans but may prove a harder slog for those not familiar with her work. But, it does have Vincent Lindon.