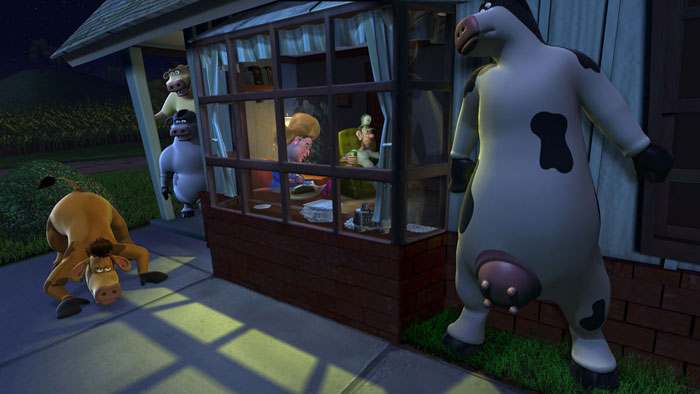 Otis (Kevin James, TV's "The King of Queens") is the much loved adopted son of Ben (Sam Elliott, "Off the Map," Thank You for Smoking"), the bull who has made it his responsibility to see that none of the farmer's animals are harmed within his fence. But Ben cannot convince Otis to grow up - instead Otis just wants to goof around with his friends in "Barnyard: The Original Party Animals."

Writer/director Steve Oedekerk ("Kung Pow: Enter the Fist," writer "Bruce Almighty") is well known for his comic work and the complete title of his first foray into animation indicates laughs are on order. Instead Oedekerk has delivered an odd mix of coming of age film and an animated "Babe" where bulls wag exaggerated udders along with their feminine counterparts. Otis and his buddies Pip the mouse (Jeffrey Garcia, "Jimmy Neutron: Boy Genius"), Freddy the Ferret (Cam Clarke, "Shark Tale") and Pig (Tino Insana, "Disney's Teacher's Pet") love to sing and dance and every night when the farmer goes to bed, they turn the barn into a hootenanny while Ben keeps watch. After catching the eye of newcomer Daisy (Courtney Cox, TV's "Friends"), Otis begs off his relief shift with dad in order to show off for the pretty cow. The end of his uproarious performance is turned on its ear when Etta the hen (Andie MacDowell, "Beauty Shop") comes in to announce that Ben is in trouble, having fended off a pack of coyotes threatening the coop. After Miles the mule (Danny Glover, "Saw," "Manderlay"), Ben's wise old friend, points out the pitfalls in Duke the dog's (comic Dom Irrera) run for Ben's spot, Otis reluctantly takes the lead. But when retribution on a cowtipper turns into a joy ride and then, worse, Otis is cowed by Dag the coyote (David Koechner, "Anchorman: The Legend of Ron Burgundy," "Thank You for Smoking"), he leaves the barn, dejected that he is not the man his dad is. There are a few funny moments in "Barnyard," most notably when the animals taunt humans from behind their backs with uncharacteristic behavior, most subtly in a strange continuing riff on "To Have and Have Not's" dead bee, but the film's more sentimental than comedic and Oedekerk never finds the right tone for the film. The animation is odd as well, with the animals' environment lovingly detailed while the animals themselves are like those squeaky plastic dog toys. There is an exception - Dag, the coyote, is desperation lean and mean given a reddish, Satanic tint that's truly scary. Vocal performances are generally very good, particularly Sam Elliott as father Ben and Danny Glover as the wise and watchful old mule. Koechner pumps Dag with malevolence while Cox is all sweetness and good as Daisy. Sykes does her usual schtick and Garcia's Pip is a little too reminiscent of Topo Gigio (for those old enough to remember him). The film is full of musical numbers and Elliott surprises with a Johnny Cash-like performance of "Won't Back Down" (written by Tom Petty and Jeffrey Lynn.) "Barnyard: The Original Party Animals" suffers from an identity crisis that is summed up in the film's finale. When Daisy, who was expecting when Otis first met her, delivers her calf, Otis takes on Ben's persona by adopting the boy - and the little bull is handed over to him, its udders jiggling like jello. It's a disconcerting sight.