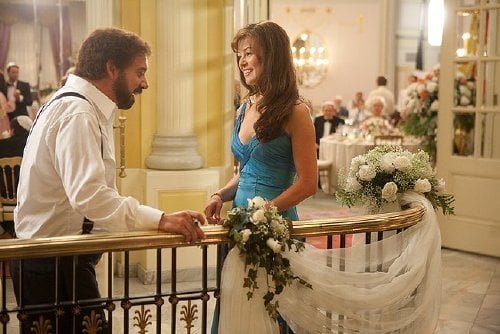 Barney Panofsky (Paul Giamatti) is a hard drinking, cigar smoking TV producer whose popular show has run for 30 years. His first marriage, in Rome in 1974, ended in death and disaster. His second marriage, to a wealthy young Jewish woman (Minnie Driver) ends before it has a chance to begin when he meets and falls for a beautiful shiksa, Miriam (Rosamund Pike), at his own wedding. He acts impulsively and his second marriage, too, will end in ways unexpected in “Barney’s Version.”

After three marriages, a successful career as a cheesy film producer and a book by police detective (Mark Addy, "The Full Monty") accusing him of murder, curmudgeonly Barney Panofsky (Paul Giamatti, "Sideways") recalls his point of view in "Barney's Version." Moving from television to the big screen, director Richard J. Lewis ('CSI: Crime Scene Investigation') and writer Michael Konyves adapt Mordecai 'The Apprenticeship of Duddy Kravitz' Richler's novel with a roster anchored by Giamatti, supported largely by Canadian actors and directors from both film and TV and the casting is the film's biggest strength. Presuming that Richler had more up his sleeve than to demonstrate how one man succeeded in driving away the ones he loved, "Barney's Version" is a tragicomedy without a lot of insights into the human condition. Lewis's outline is a marital stepping stone triptych, with each progressively longer marriage afforded more screen time, seen in flash back via a present day Barney who has begun to show signs of Alzheimer's. We're introduced to Barney making a 3 a.m. phone call to Blair (Bruce Greenwood, 2009's "Star Trek," "Dinner for Schmucks") offering to send him nude pictures of Miriam (Rosamund Pike, "Made in Dagenham"), the love of Barney's life and last wife, so he'd know what she looked like in her prime. The pictures Barney holds in his hand are aren't nudes, but romantic soft focus shots of a young bride. At his company, Totally Unnecessary Productions, he evades Solange (Macha Grenon, "The Barbarian Invasions"), the star of his long running Mountie series convinced of her global appeal because of Romanian news clippings, and everyone else who wants to relay the news of a certain book having been published. At his local watering hole, its author is there with a signed copy of 'With Friends Like These.' Signal opening flashback, a brief glimpse of best friend Boogie (Scott Speedman, TV's 'Felicity,' "The Strangers") in a scuba mask, them Rome, 1974. Here was Barney's genesis as a wannabe intellectual, encouraging Boogie's writing, palling around with artist Leo (Thomas Trabacchi) and Cedric (Clé Bennett), about to marry Clara (Rachelle Lefevre, "New Moon's" Victoria), the Shiksa painter who's carrying his child and who never misses an opening for verbal abuse. But as it turns out, everything Clara's told him is untrue and their marriage, at first a seeming sham, turns out to be a guilty heartbreak. Barney quickly decamps to Montreal, where Uncle Irv has offered him a job in television production. At a Jewish fundraiser, Barney is reluctant to be introduced to a beautiful girl, with a Masters from McGill, from a good family. One look at her (Minnie Driver, "Conviction"), though, and Barney's libido is engaged. It is the 2nd Mrs. P. who most exemplifies where Barney comes from and where he wishes he were. Her wealthy parents (the terrificly sour Harvey Atkin and Linda Sorenson) disapprove of Barney's ex-cop dad Izzy Panofsky (Dustin Hoffman) and his predilection for booze and broads and she herself is loud and vulgar, despite her educational pedigree. In a story twist that cannot help but recall "The Heartbreak Kid," Barney falls head over heels in love with Miriam, a beard for his bride's cousin Tony, at his wedding reception. This extended sequence features some lovely writing, kissed by a Canadians/Bruins game, Monte Cristo cigars and a train to New York. Barney's 2nd marriage doesn't stand a chance but it ends in a most unexpected fashion. Barney's life becomes blissful when he finally, finally wins the love of his life through ardent courtship and raises a family. But at his lake house, the site of so many life changing events and even the spectre of Clara, a chance meeting slowly snowballs in Barney's brain until it seizes in spasms of bad behavior. While the film unevenly bumps along, it does build a force of longing and regret. Giamatti earns true sympathy for his character despite Barney's lapses. That rumbly rasp of his may make one believe this is a performance we've seen before, but look between the lines. He does a terrific job moving between past and present, between uninformed and informed behavior. Watch how he mourns his father in a scene deftly played for both sentiment and hilarity. Both Hoffman and Minnie Driver provide the film's more overt comedy with their broad yet fitting interpretations. Barney's horror at what he's just gotten himself into is perfectly relayed by the fisheye lens on Driver, hoisted in her wedding chair above guests heads, screaming to her newlywed 'We're maaaarrried!' with such enthusiasm you can count her back molars. In a like turn, Izzy advises Barney that his second wife is stacked and makes a great kugel, 'in the beginning it's all briskets and blow jobs,' then urges him to follow his heart. The glorious Rosamund Pike is a dream wife and mother, loyal through thick and thin, the embodiment of everything Barney's yearned for, even when he denies it himself. Pike gives a strong yet gentle performance that becomes quite moving when the husband she is supporting becomes her ex. Watch for cameos along the way from Canadian directors Atom Egoyan, David Cronenberg, Denys Arcand and Ted Kotcheff as well as the late, great Maury Chaykin. "Barney's version" offers lots of small moments, such as Barney's reaction to the sight of an onion in his daughter's freezer, but while his three marriages are well defined, the push pull between intellectual and lesser pursuits isn't as strongly developed a theme as it could have been (Barney's first wife's a painter, his last an NPR-like radio announcer), nor the ironies of betrayal and loyalty. It's a bit of a ramble, but Barney's a shaggy dog worth following.

This is a “life and times” story that spans 30 years, in flash back and forth style, telling the tale of Barney Panofsky, his successes and failures and multiple marriages. Despite his foulmouthed and excessive ways, he is a likable guy who loves hockey – he is Canadian, by the way – and enjoys bonding with his male friends and hitting back a few. Well, more than a few. His life will change, for better or worse, when Miriam comes into Barney’s life and he tries to sweep her off her feet. Along this life, we meet Barney’s father, Izzy (Dustin Hoffman), a retired Jewish cop who is not the most couth person, especially during social gatherings, like his son’s wedding. Dad provides some of the best and bawdiest comic relief and the bond between father and son is real. The one true love in Barney’s life, Miriam, resists his advances – on the day of his wedding, Barney chases after her to her train and proposes – but finally gives in and becomes wife number three. Still, his irascible and impulsive behavior wears out even this marriage and, in his later years, Barney is alone. Things turn tragic for him as he faces the first signs of Alzheimer’s disease, alone. One problem I have, a technical one, is with the aging of the characters. For a story that spans 30 years, there is little sign of anyone getting older. Barney, for example, gets a bit balder and chunkier but, in the end, does not look much different from his three decades younger self. This does not affect the flow of the story but I did find it distracting. Otherwise, “Barney’s Version is a nicely crafted film by longtime TV director Richard J. Lewis and his talented cast and crew. It is overly long but the story and characters help make up for that. “Barney’s Version” wears its Jewish heart on its sleeve even though the title character is lapsed in his adherence to the faith. Barney respects the religion of his birth and adheres to it, though in a limited way. Although released in other countries at the end of 2010, it is, for us here, the first of the films of 2011.