Bardo, False Chronicle of a Handful of Truths 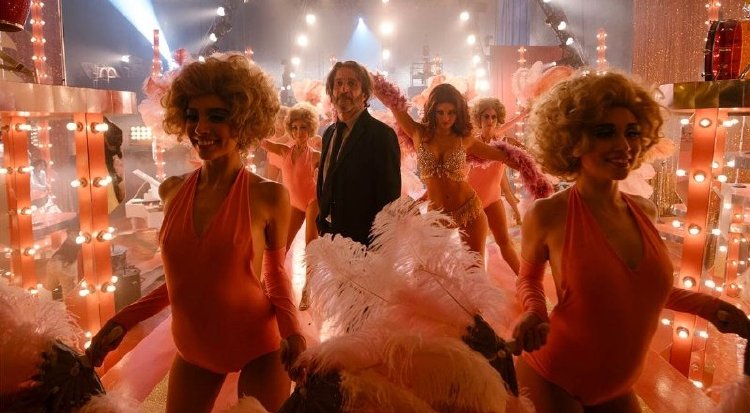 Mexican documentary filmmaker and journalist Silverio Gama (Daniel Giménez Cacho) plunges into a dreamlike state after winning a prestigious international award from a U.S. organization and traveling from L.A. back to his home country before the ceremony. He’ll face an existential question about his own identity and everything that has shaped him while in "Bardo, False Chronicle of a Handful of Truths."

There have been a number of filmmakers reconstructing their pasts within their movies of late, like Alfonso Cuaron with “Roma,” Kenneth Branaugh with “Belfast” and Paolo Sorrentino with “The Hand of God.”  Now cowriter (with "Birdman's" Nicolás Giacobone)/director Alejandro G. Iñárritu offers a more fanciful take, but it plays like a more surreal “Birdman” with a dash of “All That Jazz” that favors elaborate visuals over any emotional connection.  Fortunately Cacho is a compelling enough screen presence to keep us engaged, even if his character engenders little empathy.

Silverio appears to wander between reality and fantasy, a visit to Chapultepec Castle in hopes of an interview turning into a recreation of ‘The Boy Heroes’ myth, the much debated story of six young men who jumped off the castle to their deaths rather than be defeated in battle during the Mexican American War.  Iñárritu even indulges in some Christopher Nolan-style dreams within dreams, Silverio’s sexual horseplay with his wife turning into the dream of his sixteen year-old son Lorenzo (Íker Sánchez Solano).  The surrealism of a bag of water holding three axoliti (Mexican salamanders) flooding the cars of a public transit train will eventually loop back into reality at film’s end, where Silverio’s entire journey comes into focus as the dream-like distortion of one’s life passing before one’s eyes.

Silverio suffers a bout of imposter syndrome reflected in his appearance on Mexico’s highest rated TV talk show, one hosted by old ‘friend’ Luis who berates him as he stays silent and the audience erupts in laughter (we’ll later learn he imagined this and failed to show for the live event).  A massive party held in Mexico City is an excuse for an extended dance floor scene set to Bowie’s “Let’s Dance” with the instrumental tracks stripped out.  The documentary Gama is being both feted and derided for shows him sitting across from a prison inmate who gives an unflattering analysis of their differences.  Dubious Mexican history raises its head once more as Silverio climbs a mountain of indigenous corpses to have a conversation with Cortés before the whole is revealed as a movie set (Mexican racism pops up in the present, too, when Silverio’s daughter Camila (Ximena Lamadrid) stomps out of a resort when their maid is not allowed in as a guest).  Family is obviously a major component, Silverio visiting a mother whose dementia-addled reality reflects his own fantastical one, his deceased father’s arrival in a men’s room causing him to shrink to child-like stature.  Mateo, revealed to have died 30 hours after birth, will be alternately put into the ocean waves to crawl off like an axoliti and his ashes scattered across the sea.  And if Silverio’s Mexico (a cab driver declares it a ‘state of mind’) isn’t always comforting, his return to the U.S. is greeted by a Mexican American customs agent who informs him he has no right to call the country home.

Special effects are more weird than convincing, along the lines of how Valérie Lemercier made herself into a 5 year-old in “Aline,” but cinematographer Darius Khondji’s 65mm lensing cannot be faulted, long takes weaving through mazelike spaces, a wide angle lens frequently adding to the surrealistic whole.  "Roma" production designer Eugenio Caballero provides lavish sets for spectacle and creates the outlandish amidst the ordinary.  The whole floats upon Bryce Dessner's ("The Two Popes") lovely orchestral score.

“Bardo: False Chronicle of a Handful of Truths” is an astonishing visual experience that keeps us emotionally distant from its protagonist’s experiences, at least until its very last moments.  Daniel Giménez Cacho conjures a sexually magnetic stand-in for Iñárritu, yet oddly we spend more time in the man’s head than in his heart.