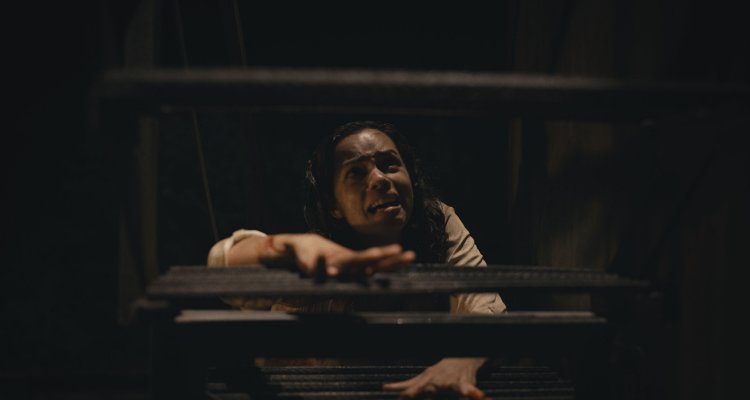 Tess (Georgina Campbell) pulls up to her Airbnb late at night only to discover the key to the house isn’t in the lockbox and the rental agent isn’t answering her phone.  Back in the cab of her SUV, she sees a light go on in the house.  Knocking on the door, she discovers Keith (Bill Skarsgård), who claims to have booked the place for the same night via HomeAway and, with a convention in town having filled hotels, suggests they share the place for the night in “Barbarian.”

By starting three related but separate stories only to leave us hanging at the critical juncture of each, feature film debuting writer/director Zach Cregger ("Miss March") keeps us on tenterhooks until revealing just what’s really going on in his last act.  And while that last act may draw a bit too much from “Don’t Breathe,” his stated inspiration - a nonfiction book outlining all the male behaviors women should regard as red flags – has served him well with a portrait of three vastly different men.

Casting Pennywise the clown (Skarsgård) as the first man we meet was a canny choice, the actor’s past roles and large, shadowed eyes casting suspicion on him from the outset.  That he, in turn, seems overly aware of a strange man’s danger to a young woman (he waits for her to watch him open a bottle of wine, for example), only puts us on higher alert.  Campbell is right there with us until conversation raises coincidental commonalities and Keith’s amusing demonstration on how to put on a duvet cover relaxes our guard.  Then Tess awakens to find her bedroom door open and Keith making disturbing sounds from the couch.

Just after their story has revealed some horrifying discoveries in deep, dark places, editor Joe Murphy (“Swallow”) jolts us with a shock cut to a red sports car driving along the California coast in bright sunlight, its driver, actor AJ (Justin Long), singing along to the radio.  He’s about to get a jolt of his own, a phone call informing him that his pilot won’t be moving forward with him because his costar has made rape allegations.  With no income, a lavish lifestyle and upcoming legal bills, A.J. is informed he’ll be broke within months and so he travels to Detroit hoping to unload properties, like that rental home where he find men’s toiletries in the bathroom and Tess’s suitcase in the bedroom.

Murphy and Cregger surprise us once again by cutting from A.J.’s discovery of an unknown tenant to the outside of his house, one which had been revealed as the only well kept one on a street full of abandoned ones on overgrown lots, likely neighboring squats and crack houses.  Except now the street is a pristine suburbia of meticulously maintained lawns (production designer Rossitsa Bakeva had the challenge of creating Detroit’s Brightmoor in two entirely different time periods on location in Bulgaria) and the man leaving the home is the tall, gaunt and taciturn Frank (Richard Brake), off to shop for plastic sheets and diapers before following a female shopper home and gaining access to her house as a city worker who conveniently unlocks a bathroom window before leaving.  Director of photography Zach Kuperstein (“The Eyes of My Mother”) gives the flashback an additional edge, shooting Brake from behind with a wide angle lens.

While the source of horror in Cregger’s script isn’t original, the way he has constructed it and some of his underlying psychological motivations make everything feel fresh.  In one scene, a pair of Detroit policemen’s complete disregard for someone who has survived the unimaginable is completely believable, made so by location production design and the actor’s hair, make-up and costume.  Cregger may be a first timer, but one gets the sense everyone he hired, both in front of and behind the camera, has given him their best.  We may have to suspend disbelief once or twice, but Cregger has given us something different and done so with the confidence of an auteur in the making.

Tess (Georgina Campbell) arrives at an Airbnb in Detroit on a dark and stormy night for an important job interview the next morning. The only problem is, another renter, Keith (Bill Skarsgard), is there and the place is double booked. And, the neighborhood is a dangerous slum and there is not a motel room available anywhere. But this is just the beginning of her problems in “Barbarian.”

Sophomore director-writer Zach Cregger tempts us with Tess’s story as we get the requisite sinister tenant, a seedy ‘hood and jump out at you scares. Then Keith disappears down a hidden stairway into a dark dungeon. At this point, I settled down for a routine horror movie where the heroine must overcome great adversity and scares to save her life. (Why do people in horror movies always make the wrong choice when confronted with a dark and sinister dungeon and go in?)

Then, Cregger shifts gears and suddenly we are in sunny LA with AJ (Justin Long) on the phone and driving down the freeway. He is the star of a sitcom and his agent has bad news: he is fired for sexual misconduct with his co-star and, worse, he will be out of money in three months, unless he sells his investment property in Detroit. Guess where his property is?

This second chapter takes more of a comedic turn and, too bad, the pace and tension developed earlier slacks off. Fortunately, once AJ is in play, the horror movie kicks back in and it takes on a queasy quotient that has to do with kidnapping, rape and motherhood. In this third act, Tess gets her due as we hope for, but her salvation is not easy.

I expected the events of chapter one to be the whole movie but Zach Cregger shows a lot of imagination and gives us something a cut above your typical small budget horror flick. There is a talent here that I would like to see more of.