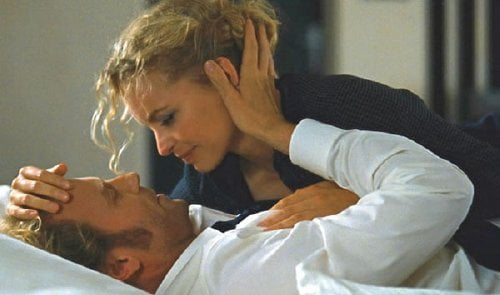 In 1980 East Germany, a beautiful, sophisticated doctor is relocated from Berlin to a pediatric hospital in rural Torgau where she is kept under constant surveillance and harassed by Stasi officer Klaus Schütz (Rainer Bock, "The White Ribbon," "Inglourious Basterds"). She makes an intellectual connection with the hospital's chief of staff, André (the very Russell Crowe-ish Ronald Zehrfeld), but is he falling for or spying on "Barbara?"

Germany's submission for the 2012 Foreign Language Oscar from cowriter (with Harun Farocki)/director Christian Petzold ("Yella," "Jerichow") is a slow building character study where looks and actions speak louder than words because of an oppressive political climate. This film is sure to draw comparisons with the 2006 winner "The Lives of Others," its more complex urban sibling. At first, Barbara Wolff (Nina Hoss, "Yella," "Jerichow") appears cold and distant. She immediately draws the attention of her new colleague when she is the only one to correctly diagnose young escaped work camp patient Stella (Jasna Fritzi Bauer), having noted that the field where she was hiding contained ticks. But Barbara bypasses the full table of doctors and medical staff in the cafeteria to sit alone. 'That's Berlin,' one woman notes dismissively. Petzold doesn't tell us what's going on with Barbara, we have to observe her, and this makes his film deeper as it - and she - open up. We see her mute, ever so slightly resentful acceptance of the rules laid down by her apartment building's house master Bungert (Rosa Enskat), who clearly relishes her authority, and her cautious noting of Schütz's vehicle across her street. She rides her bicycle down a country road and leaves and retrieves small packages from beneath a large boulder, always looking over her shoulder. Things begin to click when she rides into the woods, meeting two West German businessmen, Jörg (Mark Waschke) and Gerhard (Peter Benedict, "War Horse"), the former clearly her lover, although their assignation is cut short when an over inquisitive villager (or is he?) stops to admire their Mercedes Benz. By the time we realize that Barbara's secret activities are coordination of her escape to the West, Petzold has shifted our interest more to her relationship with André. He respects her connection with the patient Stella (who she is alarmed to learn is pregnant), is embarrassed when his analysis of Rembrandt's 'The Anatomy Lesson of Dr. Nicolaes Tulp' may have come across as show offy and appears only kind when he invites her to his home to cook the vegetables they've received as payment for their services. When another mysterious medical case comes in in the form of the comatose Mario (Jannik Schümann), though, Barbara feels cornered when André requests her assistance on her Saturday evening off - the very evening she has planned her departure. The film has so many wonderful moments which help define these characters and how their environment affects their developing relationship. The watchful, middle-aged house master is contrasted with the young girls of the area, more innocent and hopeful. Barbara finds the half dozen waitresses of a rural restaurant all lying on the floor, their legs up against a wall, as therapy for standing on their feet all day. When she goes to meet Jörg in a hotel, she must climb into his window, then hear the enthusiastic sex being enjoyed by Gerhard with a young girl. Left alone, at first she hides when Steffi (Susanne Bormann, "The Baader Meinhof Complex") slips in to snoop around, but the openness of the young girl, who is looking to Gerhard as a way out, melts something in Barbara. These moments add depth to the decision Barbara finally makes. The film's central scene, when André shares the horrific professional lapse when landed him in Torgau, is a telling moment. Is his story part of a set up or a genuine offer of trust? I am still puzzling over one admission, when Barbara tells André she hates the sea, as we know this is her planned means of escape. East German small town life of the time is beautifully recreated from Barbara's severe and depressing apartment to the country hospital to the hushed hotel with thin walls, all connected by deserted streets and dirt roads. With "Barbara," Petzold has crafted an intriguing portrait of how the human need to connect with others adapts to a tyrannical society.