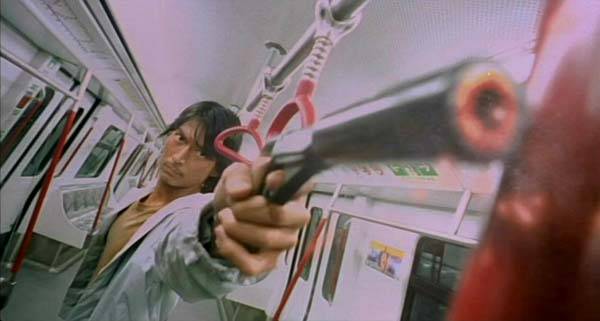 Kong (Pawalit Mongkolpisit) is a lonely deaf-mute whose sole friend, Jo (Pisek Intrakanchit), has trained him for a very special career as a hired assassin. Kong is very good at his job, dispatching his assignments with cold calculation. His ruthless life, though, is about to be softened when he meets a pretty, smart pharmacist, Fon (Premsinee Ratansopha), who shows the solitary man an act of kindness. He sees that there is more to life than death in "Bangkok Dangerous."

Deaf mute Kong (Thai Best Actor winner Pawalit Mongkolpisit) knows little but his close knit circle of friends, Aom (Patharawarin Timkul), a disco madam who conveys instructions from the local mob to both Kong and his partner, her boyfriend Jo (Pisek Intrakanchit) in "Bangkok Dangerous." Hong Kong filmmaking brothers Danny and Oxide Pang of "The Eye" series began their joint career (Oxide has one earlier directorial credit) with this Thai set film starring first time actors. First Look Studios is releasing a barebones DVD of the film to coincide with the 2008 remake (by the brothers) starring Nicholas Cage. Presented in full frame (the original film had a 1:85 aspect ratio), "Bangkok Dangerous" sports an old-as-the-hills hit man story jazzed up by flashy visuals and a charismatic turn by the very good looking lead. Kong receives his mark from Aom and proceeds to a sniper location. A little girl spies him and he hesitates, but hits his target while she delights in the result of her two-fingered 'shot.' At a local drugstore, when one druggist cannot communicate with him, Fon (Premsinee Ratanasopha) intercedes and Kong is smitten by her kindness and youthful innocence. A halting romance begins. Meanwhile, Aom has rebuffed the advances of the mob boss's right hand man and is raped for her troubles. When Jo retaliates, it is he, Kong and Aom up against the hand that formerly fed them. The film alternates between fast-paced action scenes (disco scenes include rainbow color strobing, indicative of Oxide's beginnings as a colorist and Danny's as an editor) with closeup character scenes (often too closeup, such as when we're presented with Kong's right eye, the rest of his face offscreen). Befitting the hero's deaf/muteness, there is little dialogue until the film's midsection, which may explain why some of the early film, often shot in darkness, is a bit difficult to follow. Technically, the film is an odd mix of flash and murk. The story of the hit man with a heart of gold has been told before, and better (Luc Besson's "The Professional," for one), but Kong and Fon's relationship is still sweetly told. Based on his performance here, it is surprising that Pawalit Mongkolpisit has not become a bigger star (IMDB only lists two further film credits in films that did not see U.S. release). The DVD's only additional offering is the film's original trailer. The Pang brothers's Nicholas Cage starring remake is not being screened for press by its distributor, Lionsgate, but its story has been significantly changed in that it is the love interest who is now the deaf mute. Instinct says the 1999 version is the better film.