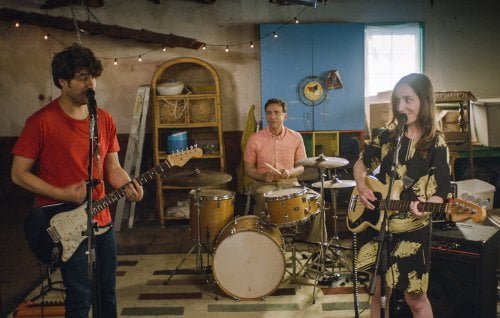 In hopes of easing Anna (Zoe Lister-Jones, TV's 'Life in Pieces') and Ben's (Adam Pally, TV's 'Happy Endings') constant squabbling, their therapist recommends they try something unconventional. Several nights later, Anna suggests they turn their fights into songs and start a band. Joined by their oddball drummer neighbor Dave (Fred Armisen, TV's 'Portlandia'), Anna and Ben pick up guitars and give their relationship more than a "Band Aid."

After cowriting and producing two films ("Breaking Upwards" and "Lola Versus"), Zoe Lister-Jones makes her directorial debut with an all female crew. This frequently hilarious film should be relatable for anyone who's ever been in a heterosexual relationship as it delves into the gender differences which spark so many misunderstandings. As it turns out, turning these barbs into song is a brilliant idea - The Dirty Dishes (the band is named after the couple's most frequent cause of contention) could become a cult success on the club circuit. (Lister-Jones also cowrote all the film's original songs, which she performs with costar Pally.) The film opens right on those dirty dishes which makes Anna crazy. An argument devolves into lists of accusations and hurled vulgarities. Attempts to clear the air highlight a dual feeling of failure, Anna an Uber driver with a lost book deal, Ben an artist free-lancing soul sucking corporate jobs. Things are tense as the couple drive to her godson's first birthday party, a phone call from Ben's mom (Susie Essman, HBO's 'Curb Your Enthusiasm') begging for a grandchild escalating the tension. But something magical happens at Grace and Bobby's (Hannah Simone, TV's 'New Girl,' and Ravi Patel) toddler-heavy bash. After Ben is flummoxed by his wife's friend Candice's (Brooklyn Decker, "Just Go with It") matter-of-fact breastfeeding, he seeks out Anna for some pot decompression in the bathroom. When they return to the backyard, they're inspired to pick up kiddie instruments and lead a sing-along. The mutual bout of creativity finds them happy for the first time in ages. A deep-seated trauma comes to light around the film's midpoint, the film's second half becoming more dramatic but no less insightful. (The comedy built around former sex addict Dave and his two sponsee former strippers Cassandra Diabla (Jamie Chung, "The Hangover Part III") and Crystal Vichycoisse (Erinn Hayes, TV's 'Kevin Can Wait') plays like a rejected 'Portlandia' skit.) In attempting to rip off the band aid to get to the truth, hurtful words are spoken which cause a separation. Ben heads to Dave's, then his mom's and it is the latter stop where he receives words of true wisdom. Lister-Jones's dialogue is funny and sharp, cutting into such topics as negative female body image and male compartmentalization. She and Pally completely convince as young marrieds whose love is evident even through a period of harsh words and dampened desire. The supporting cast is a who's who of television players all on their game (Lister-Jones's 'Life in Pieces' costar Colin Hanks appears as a misogynistic jerk of an Uber customer). "Band Aid" is a small film that should be relatable to many. Multi-hyphenate Lister-Jones succeeds on multiple levels, her musical abilities the most surprising - her song "Lying Is Love" should be remembered at year's end. Grade: