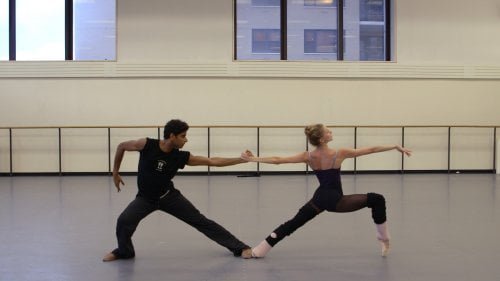 Twenty-five year-old Justin Peck is one of fifty dancers who make up New York City Ballet's Corps de Ballet, but he also studied choreography and showed great promise. When he was tasked with creating an original work for the 2013 Winter season, director/cinematographer Jody Lee Lipes (HBO's 'Girls') was there to get a fly-on-the-wall perspective of the evolution of "Ballet 422."

Excepting some opening informational and 'countdown' (One month til opening, etc.) title cards, Jody Lee Lipes follows the Frederick Wiseman aesthetic of documentary filmmaking, letting his audience make their own assumptions and conclusions as we watch this young dancer create and guide a new work to a most prestigious stage in a mere two months time. This unprecedented document of the creative process at New York City Ballet is sure to be an eye opener for those who don't get to look behind the scenes, but although we see many technical challenges being worked through, Peck's actual artistic aim is more implicit. Choosing a musical composition from 1935, Peck begins to build his work from the ground up, graphing movement on paper, working with his principal dancers Tiler Peck, Sterling Hyltin and Amar Ramasar to hone moves (the dancers themselves are far more collaborative than I would have guessed). We see Peck uses his iPhone like a coach watching replays and getting notes from Ballet Master Albert Evans. If there are criticisms of the young man's work by his peers, we must intuit them. As interesting as it is to watch small adjustments of a dancer's performance take shape, it is the elements most take for granted that prove more compelling. 'Are we worried that this fabric will get super pilly?' isn't the type of concern one assumes when thinking of ballet. Lee Lipes films one entire orchestra rehearsal by keeping his camera on conductor Andrew Sill, a dynamic and unconventional choice, but it's even more intriguing to see Peck advised to get the musicians on his team with a pep talk, one which must be politically arranged (and indeed, we seem to feel more excitement in the music afterwards). While a costumer works to dye match fabric with a running, churning machine, lighting designer Mark Stanley worries about backdrops causing color washouts, a correction maybe altering the tone of a movement. Although it is stated up front that Peck is an active dancer, it is not until the movie's climax that we fully realize that, in addition to his work as a choreographer/director, Peck has also been prepping to perform in another work on the same night as his 'Paz de la Jolla' premieres. The climax is edited with flashbacks leading to the big night, Peck doing meets and greets in the lobby, then watching from the stalls before slipping away for his second role of the evening. "Ballet 422" offers many insights into what goes on behind the scenes, but it presents an environment with minimal conflict and a ballet seen in sketches. Grade: