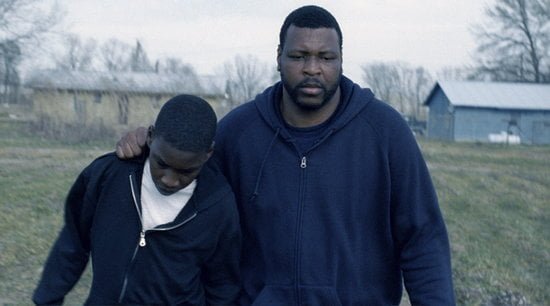 In the Mississippi Delta, twelve-year-old James (JimMyron Ross), whose single mother Marlee (Tarra Riggs) is struggling in a demeaning job to try and keep them afloat, is beginning to drift in with a local gang of teenage drug dealers. Not too far away, Lawrence (Micheal J. Smith Sr.) sits in darkness, catatonic since finding the body of his twin brother Darius, a suicide. That death will reunite these three people, and, eventually, bring them "Ballast."

Writer/director Lance Hammer, winner of the 2008 Sundance Film Festival's Best Director award, goes the naturalistic Dogme/improvisational route for his feature film debut and achieves some unaffected acting from his nonprofessional cast and a sense of the sadness of his location in winter. For all his studied pace, though, he still leaves us with too many questions and some fairly large plot holes. "Ballast" marks a new talent to watch, but this one is for patient art house audiences willing to overlook story development in favor of tone and mood. Lawrence is discovered by a neighbor, John (Johnny McPhail), who comes to check on the brothers when their small grocery store, the Lucky 49, has been closed more than a day. He calls in the authorities and the commotion seems to trigger something in Lawrence, who picks up a handgun and attempts to kill himself. Meanwhile, James finds out the dealers think he owes them and has zero recourse to get the money. Lawrence is released from the hospital and returns home to broken window panes on his front and back doors. One day, James arrives brandishing Lawrence's gun, demanding cash. It's not enough. The gang overtake Marlee's car, and beat both her and her boy. As a result of her black eye, Marlee loses her job scrubbing toilets, her boss afraid she'll make customers uncomfortable. The next day she shows up with James in tow on Lawrence's doorstep demanding half his home and business. She is Darius's ex-wife and James is his nephew. There is obviously a serious rift in the past between Lawrence and his brother's family. He says she was a drug addict, but that raises the question as to why Darius would have allowed his son to be brought up by an unfit mother, and this while we're still trying to figure out how James could have stolen a gun which would obviously have been removed by the cops from a crime scene. Those pesky drug dealers seem content to trade their hundred dollars for Marlee's black eye, too, as they never reappear. We're also given no insight as to why Darius purposefully OD'ed and why Lawrence reacted in such a violent manner. If you can get past these problems, what Hammer does is show a trio of people tentatively leaning on each other and slowly healing. When Lawrence shows no interest in reopening the Lucky, Marlee goes in with James and surprises him with her ability to figure out things for herself. Lawrence suggests home schooling for James and allows himself to be reengaged in the store in order for Marlee to do it. But just when Lawrence and Marlee seem to have come to a tacit understanding and trust, it becomes evident that they still do not see eye to eye. Micheal J. Smith Sr. is effective at conveying despair. He does not change facial expression much and remains a bit of a cypher, but does grow in confidence. Tarra Riggs gives a much more energetic performance and the non-pro should see a career in front of her. JimMyron Ross has the sullen teen with a bit of entitlement 'tude thing down pat and conveys love for his mother nonverbally, but frankly, the kid needed to be subtitled as he his speech is barely comprehensible. Johnny McPhail is solid as the kindly neighbor, but his relationship to Lawrence is ambiguous. Cinematographer Lol Crawley achieves some beautiful gray imagery and has a talent for framing characters within landscapes. An indoor shot of James lying on the carpet with Lawrence's dog reveals all sorts of textures. Fitful focus pulling occasionally calls attention to itself, however. Abiding by Dogme rules, the film only uses natural sounds and no score, a good call in maintaining the film's overall tone.