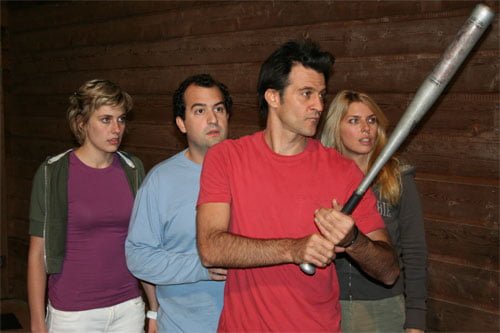 Two couples, each member a wannabe-movie star but each is really just a lowly movie extra, attend a local film festival. After seeing an under-$1000 budget indie (by a friend of Matt’s (Ross Partridge)) and a few shots of tequila later, the quartet decide to drive out to Chad’s (Steve Zissis) remote family summer home and write a screenplay for their very own low budgeter. One idea comes from Michelle’s (Greta Gerwig) post-drunk dream (but, was it a dream? Or, was it real?) about a faceless menace called “Baghead.”

A former couple and one-sided future one comprised of sometime actors attend a pretentious, low budget art film at Hollywood's Underground Film Festival. Over drinks, they decide they could do better and decide to write their own roles over the weekend at Chad's (Steve Zissis) uncle's cabin at Big Bear Lake. That first night, Michelle (Greta Gerwig, "Hannah Takes the Stairs"), having gone outside for a drunken hurl, thinks she sees a threatening man with a bag over his head, but the next day she describes it as a dream and the group becomes divided over whether to write a relationship movie or a horror film based on the "Baghead." Writer/directors Jay (also cinematographer) and Mark Duplass ("The Puffy Chair) have come up with a Chinese Puzzle box of a shoestring budgeted film within a shoestring budgeted film within a shoestring budgeted film all the while taking the piss out of themselves. This very clever film takes a good idea, a low budget (their 'monster' is a brown paper shopping bag! and yet creepy!) and runs with it. Jett Garner's (Jett Garner) a director clearly suffering from delusions of grandeur. After his grainy, black and white film "We Are Naked" is shown to underwhelming response at best, he answers an audience question about budget (it was under $1,000, about half what he'd hoped to spend) saying that 'Hollywood is convinced you need $100 million to make a piece of art, when it is obvious you do not.' The four friends decide to crash his after party just to make connections. Matt (Ross Partridge) knows the guy, gets his card, but is too embarrassed to ask for an invite. Michelle crashes, followed by her faithful puppy Chad and Matt's ex-girlfriend Catherine (Elise Muller, "Vampire Lesbian Kickboxers"). Matt, trying to use his wallet to look like a cell phone is held at the door. Later, over drinks, it becomes clear that Matt is the most experienced and ambitious of the bunch (Catherine's focus is on Matt, Chad's focus is on Michelle, and Michelle just lacks focus) and when they get to the cabin, Matt keeps trying to drive the script while the others booze and canoodle. Matt experiments with a script writing device much like a game of telephone using notes. Michelle, already tipsy, passes Matt a note saying he should come to her room in twenty minutes, then tells the group she's tired and is going to bed. The previous night when she did this, Matt objected. This time he does not. Twenty minutes later and Michelle, in her semi-detached room, sees a rectangular shadow outside her bedroom door. Thinking it's Matt playing on her earlier story, she strips. The bag headed person watches, then leaves. The romantic betrayal makes everyone suspicious as to the real identity of the bagman. One of the great things about "Baghead" is that by the time you begin to keep track of who is in a scene when the Baghead appears, all four are and the film goes to unexpected places, becoming a real horror film, then cycling back again into self reflectiveness. The cast is great, all 'types' who resemble other, better known people (Partridge is a Richard Lewis lookalike, for example). In keeping with its budget and subject matter, the film is shot mostly hand held, at times even recalling "The Blair Witch" without the nausea. "Baghead" - it's a relationship movie, a horror film and an independent Hollywood insider satire, all three elements winking at each other the whole time.

The Duplass brothers, Jay and Mark, brought us the small-budget laugher “The Puffy Chair” about one man’s quest to find a purple Lazyboy recliner for his dad’s birthday. They shift gears from odyssey to fright with Baghead,” a film that manages to elicit laughs, chills, scares and keeps you guessing to the end. It is like “The Blair Witch Project” but without the annoying camera work. Sure, the brothers D use shaky hand-held cameras that are constantly finding focus, but, here, it works. The four-hander cast ­ the aforementioned Partrige, Zissis and Gerwig plus Elise Muller completing the quartet as Catherine ­ give believable performances that complement the well-honed script by the Duplass boys. This is a true ensemble effort as each character is given full shrift to become 3D people. Techs are very low-budget, the cast is unknown and the writers/directors are known to few filmgoers but cast and crew give a superior effort to each task and role assigned. By the end of “Baghead,” you realize that nothing is as it seemed. As an avid film buff and viewer I am rarely surprised by the end of a movie. Usually I can figure out the plot twists but not so here. This is the kind of imaginative and witty filmmaking that brings us that scarce commodity: a little movie gem.