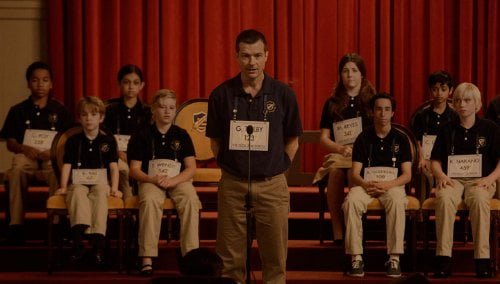 Guy Trilby (Jason Bateman) has a metaphorical chip on his shoulder. He found a loophole that allows him, an adult, to compete in a regional spelling bee normally attended by eighth graders – and win. He moves on to the prestigious Golden Quill national bee where he creates a scandal with his “Bad Words.”

In Columbus, Ohio, a middle school's 15th annual spelling bee turns into a melee when 40 year-old Guy Trilby (Jason Bateman, TV's 'Arrested Development,' "Identity Thief") thwarts organizers by technically adhering to all their entrant rules. Then he wins. Accompanied by his media sponsor, The Click and Scroll's Jenny Widgeon (Kathryn Hahn, "We're the Millers"), Trilby heads on the national level, where the Golden Quill's administrator Dr. Bernice Deagan (Allison Janney, "The Way Way Back") promises to leave her post if she fails to eject Trilby in "Bad Words." First time screenwriter Andrew Dodge sets up reporter Widgeon, who has exclusive rights to Trilby's story, as an audience stand-in with her investigation into Guy's motivation for grappling with 10 year-olds and their pissed off parents to win a competition traditionally meant for much younger scholars. In his feature directorial debut, star Jason Bateman revels in politically incorrect situations as there is nowhere his character apparently won't go in his quest to win the bee. The latter aspect is intermittently amusing, especially when Trilby goes toe-to-toe with Rachael Harris (the "Diary of a Wimpy Kid" series) as a contestant's mom, but it inevitably damns the man when we finally get resolution. It's disappointing to see Bateman, whose participation promised wit and subversion, assembling such a high profile cast for so little payoff. Once his stage has been set, Trilby plays in three arenas. There is the bee, of course, nationally broadcast as organizers and audience fume and Trilby psyches out competitors in the most awful ways (telling one kid Jen's panties in his pocket are his mom's, fooling another into thinking she's just gotten her first period). There is his relationship with Jen, who has a masochistic sexual attraction to the man (she screams 'Don't look at me!' while they're having sex). Then there is his unlikely friendship with another competitor, the irrepressible Chaitanya Chopra (Rohan Chand, Showtime's 'Homeland,' "Lonesome Survivor"), who becomes Guy's sidekick in inappropriate activities like copious drinking and picking up streetwalkers. Home base is the San Fernando Valley's Sportsmen’s Lodge, depicted as so shabby and run down, a tacky joke, one wonders why they elected to lend their name to the project. Bateman plays Trilby with laid back contempt giving the overall effect of being Michael J. Fox's evil twin. As a director, perhaps his biggest accomplishment is in lensing Hahn with a soft prettiness, something which often eludes attractive comic actresses (the Madeleine Kahn effect). A few of his pitch black set pieces, including a night out montage with Chopra, work perhaps, but his blade is never as sharp as he seems to think it is. Chand is a standout as the unflaggingly friendly speller who may have a secret agenda of his own - this kid knows how to turn on the charm without piling on smug precocity. Janney has nothing to do but tut and as her boss, Philip Baker Hall ("Secret Honor," "Argo") lends gravitas to an unenviable role. Harris is a bright spot on a dull canvas. "Bad Words" seems concocted from a Sundance checklist - odd couple squared, 'shocking' shenanigans, quirky locations, weird sex and a children's competition - and its cynicism and faux sentimentality flatline. $%#^& this movie.

I have always like Jason Bateman and his brand of deadpan humor so I anticipated his directorial debut. Bateman plays a highly intelligent man who is set on a (rather vague) vendetta – to enter and win the super bowl of spelling bees. But, what could have been a light little comedy is a dark, moody story of a man obsessed who will stop at nothing to win the big bee. It is not all darkness and angst, though, when Guy meets one of his competitors, 10-year old Chaitanya Chopra (Rohan Chand), a super intelligent but lonely kid. (It will be no surprise that Guy will befriend his young opponent by the end of the film.) The dark, almost cruel, way that Guy goes about his business of sabotaging the opposition gives “Bad Words” a negative edge that results in keeping the film and its humor at arms length. Some of his sabotage efforts are funny but others are just plain mean, if not vulgar. The bright star of “Bad Words” is Bateman’s young costar, Rohan Chand, who shines as Chaitanya. Guy rejects the boy at first, not wanting to be distracted in his quest but, as I said, this will turn around. How Guy and Chaitanya go about bonding does make for some of the funniest, and often in poor taste, moments in the film. The screenplay, by first-time scribe Andrew Dodge, has the feel of a debut work. It is a bit sloppy in its narrative and the jokes are hit or miss, with the majority being misses. Direction, too, by newbie helmer Bateman has a tyro feel to it, letting the story get out of hand and fragment. All in all, a directing debut that I had far higher hopes for turns out to be a disappointment.