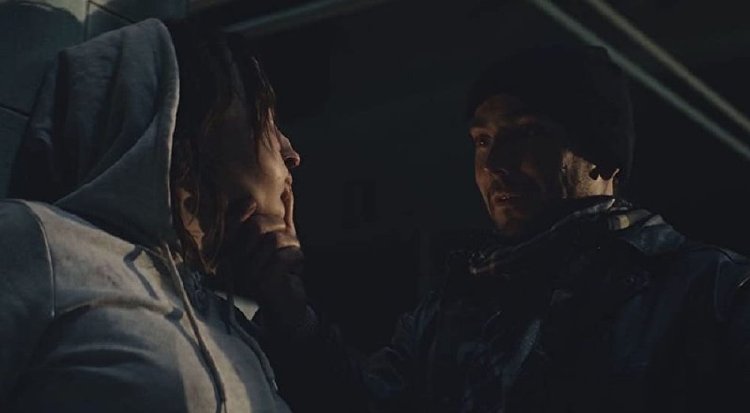 A tipsy headmaster who mistook his wife’s passport for his own, three teenaged girls smoking cigarettes outside a convenience store, one of those girls’ grandmothers and a young woman from the city are all victims of the dehumanizing effects of war as Russian soldiers occupying the Donbass region of Ukraine turn their country’s byways into “Bad Roads.”

Writer/director Natalya Vorozhbit made her feature directorial debut adapting her 2017 stage play only to see it win slews of local awards before becoming Ukraine’s submission for the International Feature Oscar.  The film is often shocking in its brutality, especially considering it is depicting Ukraine five years before Putin’s full scale invasion.  It is also occasionally a bit difficult for outsiders to decipher, but that has only a minor impact on its overall power.

Take the first tense encounter, where it is unclear just who (Andrey Lelyukh) is stopping a headmaster (Igor Koltovskyy) at a checkpoint.  Is this a Russian officer or Ukrainian ‘peace keeper?’  In any event the teacher, who insists he was just celebrating a school victory with one of their colleagues, mistakenly took his wife’s passport instead of his own and the Kalashnikov in his trunk, which he insists is a dummy used for school training, makes matters worse.  The principal’s fumbling sincerity helps defuse the situation until he thinks he sees a female student being held in the soldiers’ bunker.

His description of her as a nice girl dealing with harsh circumstances, including being brought up by her grandmother after losing her parents might be the girl (Anna Zhurakovskaya) in the next sequence.  As she sits smoking with two other friends, we learn they have romanticized hookups with occupying Russian forces, one providing a naively debasing tutorial on how to have sex while remaining a virgin.  After the friends leave to meet their men, her grandmother (Yuliya Matrosova) arrives, trying to get the girl to eat the soup she’s brought and convince her that these soldiers will ‘make mincemeat’ out of them.  Director of photography Volodymyr Ivanov deftly moves the sequence from early dusk to twilight, distant gunfire arriving with darkness.

The third act, set below ground, is shot in such dark conditions it is often difficult to make out, the better to shield us from the film’s worst atrocities, all rained down upon Yuliya (Maryna Klimova), kept as a sex slave.  Her first ‘lover’ is a self described sadist, whose words are as difficult to listen to as his acts are not to see.  Yuliya reacts with words of love, an attempt to get her captors to view her as human, the same tactic used by victims of serial killers, but by the time Stas (Yuri Kulinich) arrives to wash away the urine of a prior soldier, we only see the shell of a human.

The last and shortest story features a female Peugot driver (Zoya Baranovskaya) from the city distraught over having inadvertently killed a peasant farmer’s (Sergei Solovyov) chicken, a story Yuliya ascribed to herself as an example of her own 'sadistic tendencies' minutes earlier.  When the woman first approaches the farmer and his wife (sly scene stealer Oksana Voronina) to admit to and offer compensation for the accident, they treat her with suspicion, but as soon as an amount is agreed to and cash money makes an appearance, the wife continually finds new reasons to increase the bird’s value, shaking the woman down for an absurd amount.  Is this predatory behavior due to rural distrust of liberal city dwellers or a conflict between Russian speaking Donbass residents and a native Ukrainian?  (If I could speak either language, I’m sure it would be clearer.)  In either event, it is revelatory how Vorozhbit imbues the situation, one which could easily have become comical, instead with unsettling predation.

“Bad Roads” requires more familiarity with the Ukrainian situation than most American audiences will have, but it is still illuminating to hear how casually the epithet of Nazi was cast about even five years ago and it is a stark reminder of how quickly our humanity can disappear during war.

Film Movement releases “Bad Roads” into both physical and virtual theaters on 4/29/22 – click here for playdates.