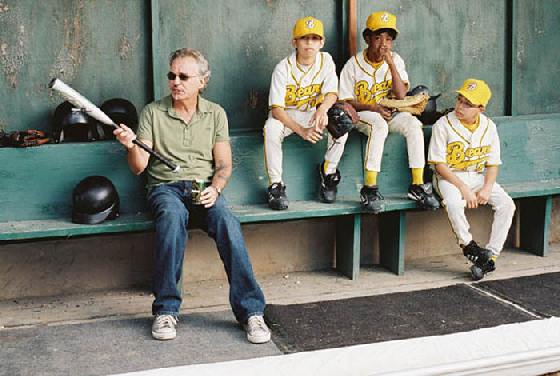 In 1976 Walter Matthau led his pack of irreverent junior misfits to victory in what became the benchmark for nearly every kid team movie that has come down the pike since. But, I can’t think of one, off the top of my head, which even comes close to the profane cheekiness and fun of the original “The Bad News Bears.”

Buttermaker (Billy Bob Thornton, "Bad Santa") sustains his womanizing ways with stories of how he once pitched 2/3 of an inning in the big leagues, but the middle-aged alcoholic maintains his trailer park lifestyle as a pest exterminator. When he's suckered into coaching a new Little League team made up of other outfit's rejects he barely goes through the motions for the paycheck, but when his players are ready to give up in disgust, Buttermaker has a change of heart and turns his bunch of losers into "Bad News Bears." Richard Linklater hit one out of the park with 2003's "School of Rock," another tale of a single guy transforming a bunch of kids and star Thornton and writers Glenn Ficarra and John Requa's "Bad Santa" was even more outrageously un-PC than the original movie they've adapted. So what went wrong? This time they all struggle to get the occasional wiffle ball aloft. It's certainly not the fault of "Bad Santa" star Billy Bob Thornton. After that film, he was the (almost too) obvious choice to take over Walter Matthau's beery old crank of a coach and Thornton puts a lower key sheen on his Santa's obliviously inappropriate behavior. While 2005's kids don't drink (except for nonalcoholic beer) or smoke, they do engage in a rousing sing along to 'Cocaine' in a Hooters and find Buttermaker sneaking out of mom's bedroom. PC-ness itself is goosed with the inclusion of Matthew Hooper (Troy Gentile), a kid in a wheelchair who lawyer Liz Whitewood (Marcia Gay Harden, "Welcome to Mooseport") believes has the right to play baseball. But Linklater fails in two ways. He never coaxes a strong enough sense of cause and effect out of his story, so Buttermaker's changes of heart seem to come out of thin air, visual jokes are underplayed and scene changes often feel random. And his pacing is all off, with the film's climatic championship game dragging on as if it were being played in real time. It's as if the whole movie had OD'ed on Valium. Greg Kinnear's character ("Godsend," "Robots") as Buttermaker's rival coach of the Yankees, Bullock, is particularly underdeveloped. His penchant for wearing pants which overly enhance his crotch is a joke that doesn't work, because it's not made extreme enough. Worse, his relationship with two boys - his own son Joey (Carter Jenkins) and local tough Kelly Leak (ball player Jeff Davies) - should be the basis of his own undoing, but the threads aren't tied tightly enough. Amanda Whurlitzer (all star Sammi Kraft) is a nice enough new screen presence but no match for the original's scene-stealing Tatum. Most of the kids fade into the background interchangeably. Only Timmy Deters' ("Kicking & Screaming") pugilistic Tanner makes a strong impression (although Gentile gets one of the film's true laughs playing on Buttermaker's sympathies). "Bad News Bears," which sounded like one of 2005's more promising remakes due to the talent involved, turns out to be one of its most unnecessary. These "Bears" aren't bad news - they're boring.